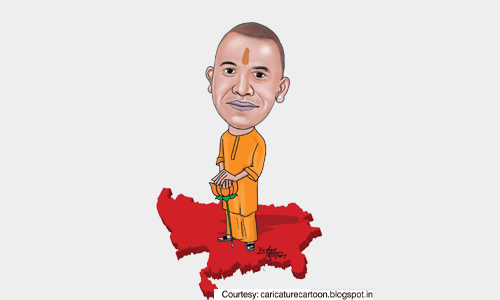 The Lutyen zone-based intellectuals and liberals have been in gloom ever since the BJP registered an unprecedented record-breaking win in the Uttar Pradesh assembly election that has put it on course for 2019 general elections. It was double whammy for the liberals, when the Akhilesh Yadav-Rahul Gandhi alliance, on which they had put their money, came a cropper and almost lost its relevance in the state politics.

The most populous and politically most crucial state, which sends 80 MPs to the Lok Sabha, is, to the horror of the secular brigade, now being governed by Yogi Adityanath, Mahant of Gorakhnath Muth, who not only believes in Hindutva but practices it. The secularists, who self-arrogated the responsibility to protect and promote secularism, as conceptualized by Nehru, are convinced that Hindutva will edge out secular values, bigotry and fundamentalism will threaten the very idea  of India. And what a calamity has befallen the liberals’ India–the BJP, which provides the stimulus for Hindutva, is in power in all major states, except Bihar and Karnataka.

In despair, liberals have been churning out vitriolic edits, essays and commentaries warning what the likes of ochre-coloured robe-wearing Adityanath would do to destroy the secular fabric of the society. Ruchi Gupta has lamented in a long article, “The BJP has bared its fangs with the anointment of Yogi Adityanath as the chief minister of Uttar Pradesh. The head priest of Gorakhnath mutt, who has his own private army and openly canvasses for a Hindu rashtra, immediately got down to work, setting loose vigilantes to moral police young couples in the name of women’s security and shutting down slaughterhouses.

“Pro-establishment intellectuals no longer have the alibi of ‘development’ now and must squarely acknowledge what the ascendance of the BJP represents–the establishment of an authoritarian Hindu majoritarian state.”

Ms Gupta must be a very satisfied secularist having pronounced her summing-up unilaterally. But so far, there are no signs of any authoritarian Hindu majoritarian state coming up.  She must be very frustrated with the functioning of Yogi Adityanath in UP. But she is in august company of other intellectuals who have warned of more severe disasters befalling India, courtesy Hindutva promoters.

Judge if Yogi is bigoted or development oriented

A summary of some other key decisions taken in the last 20 days:

Ashok Swain, Professor of Peace and Conflict Research at Uppsala University, Sweden, seems worried about secular credentials of India, sitting over 5000 kms away. In an article, he says, “Adityanath is not an ordinary BJP politician. He is what a politician in any civilised country should not be. The massive electoral victory in the Hindu heartland and total capitulation of media have encouraged Prime Minister Narendra Modi and his Man Friday, Amit Shah, to not only install an RSS pracharak as the chief minister of Uttarakhand, but also to appoint a bigot….(in UP). …” He is anxious about the welfare of 20 per cent of  Muslims — around 40 million in the state. He also pointed out that the site of secular India’s most sensitive spot, Ayodhya, is in UP, which, according to him, is being led by a bigot. The insinuation is self-evident!

All the fears and apprehensions of Liberals about secular credentials of India under threat from the BJP stem from its Hindutva ideology. They feel Hindutva has been the opiate to stimulate the Hindus for violence like in breaking the Babri structure. With the rise of proponents of Hindutva, Muslims are in danger. In fact, one of the leading liberals has already concluded that Muslims in UP are living in utter fear.

Is then Hindutva a religious ideology, which tends to communalise the society and cause differences and split?. L.K. Advani had made a very significant comment, which is still being debated. He said that India is secular because of Hindutva. He elaborated that it was not religion but a way of life. This was a perceptive and correct interpretation. It did not conflict with secularism, but the liberals are being hostile without trying to understand what Hindutva stands for.

About that time (1995), three-judge bench of Supreme Court observed,  that Hindutva was not a religion but a way of life. It was in fact an indictment of those who have been misinterpreting Hindutva and claiming that its proponents are communal, bigoted and divisive.

The mischief resulting from the misuse of the terms by anyone in one’s speech has to be checked. It is indeed very unfortunate, if in spite of the liberal and tolerant features of Hinduism, recognised in judicial decisions, these terms are misused by anyone during the elections to gain any unfair political advantage. It is to be noted that Shashi Tharoor too has sai, “Hindutva has nothing to do with Hinduism as a faith or as a religion, but rather as a badge of cultural identity and an instrument of political mobilisation ….Hinduism is a religion without fundamentals.”

Pawan Varma hit the nail on the head when he said, “Some political parties that reflexively genuflect before the altar of secularism have blatantly used Muslims as vote-bank in order to win elections and also blames the BJP for consolidating Hindu vote by arousing their religious sentiments.”

It is evident from the views expressed above that secularism is being interpreted and used  by the Congress and naturally then by its protégé denizens of Lutyen’s zone to ensure votes of the minorities. And to doubly ensure their support the ‘secularists’ have given religious colour to Hindutva so as to scare Muslims of BJP.  But the Muslim youth has realised that they are being used. Many of them have started to believe that Modi and now Yogi Aditynath are sincere when they repeatedly assure Sab ka Saath, Sab ka Vikas.  It is because of this that many voted for BJP candidates in the recent UP assembly election. This was reflected in the results–BJP: 325; Congress: 7. Has the Congress, gasping for survival, realised that the BJP has started proving in UP that Hindutva is no bar to development.