Who needs Statehood for Delhi? 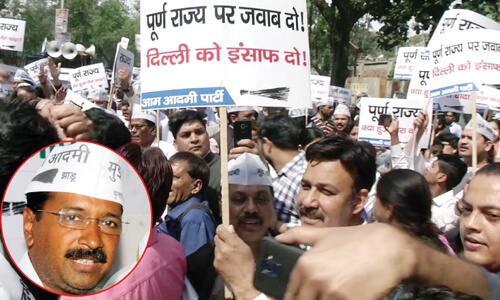 With the process of General Elections to Lok Sabha in the country already set in motion, Delhi Chief Minister Arvind Kejriwal has become more vociferous and active to pursue his Aam Aadmi Party’s (AAP) demand for Statehood for Delhi. Next year, Delhi will also go in for elections to its Assembly. Kejriwal has also called on the Union Home Minister Rajnath Singh to press this demand.

Kejriwal had threatened to go on fast till the demand was met. But, in the meantime, terrorist struck on a CRPF convoy in Pulwama in Jammu & Kashmir which killed more than 40 jawans. Keeping in view this tragedy Kejriwal postponed his fast. He continues to raise his demand at various forums. He has challenged the Congress and BJP to make their stand clear on the issue. Both these parties, Kejriwal alleges, had earlier promised full statehood for Delhi but never kept their word.

Statehood to Delhi may be the demand of the AAP — and earlier of some other political parties too — yet it is difficult to say that the common man of Delhi is put to any disadvantage or inconvenience because of the absence of full statehood to Delhi. For what the common man in Delhi has to knock at the doors of the administration pertains to visiting a Patwari and Tehsildar for some work relating to revenue department, Police, district magistrate, deputy commissioner,  a court, and the like. Absence of statehood does not stand in the way of an ordinary citizen to get a ration card, a driving licence and arms licence. The other organs to provide him daily civil services at present are the Delhi municipal council and New Delhi Municipal Committee. He never feels the pinch of the absence of  statehood for Delhi in getting his routine work done.

The statehood is virtually the exclusive demand of politicians — and not of the common man — to get more powers for themselves in the name of providing better services to the people. AAP and its government wishes the people to believe that if statehood was granted the Delhi government would be in a better position to deal effectively with the law and order, put a saddle on the police and bureaucracy, to control crime and to give better protection to women etc.

If statehood were the panacea for all the ills facing the people, then all other states in the country which enjoy this privilege should have been the models of good governance, of peace and prosperity, no crime, no corruption, no poverty, no unemployment, no price rise, no crime against women and so on. Self-sufficiency would have been the hallmark of these states. Yet, most of the states do not portray a happy picture. Even J&K, which enjoys autonomy greater than all other states of the country, cannot boast of such a reality.

Granting statehood to Delhi has political and administrative complications and ramifications. That is why the Congress which ruled Delhi for 15 years and had a government of its own at the Centre for a decade did not meet this demand. There can be instances when New Delhi, the seat of power of both the Union and the Delhi State government is ruled by two different political    parties, as at present, opposed to each other. In that situation, chances of a clash of interests between the two can be frequent. There have also been instances when Head of State of a country visits New Delhi and the political party running the local Delhi government is opposed to the programmes and policies of the visiting dignitary. Some political parties have been staging protest rallies against such foreign heads of governments or prime ministers on a State visit to the country.

The record of the present AAP ruling the national capital during the past more than four years when it had been at odds with the Centre has not strengthened its demand for Statehood.  For most of the time, it had only been fighting with the Centre and the Lt. Governor. The AAP government created an embarrassing situation for the national government when Chief Minister Kejriwal himself sat on a dharna opposite the Rail Bhawan adjoining the route of the national Republic Day parade which was to pass through it. Kejriwal went on to say that he is not worried if his dharna comes in the way of the national celebrations. It was at that time that he claimed himself to be an “anarchist”. Note the contrast — a chief minister himself the product of a democratic system believing in anarchy! AAP leaders and even ministers are on record having taken law into their hands.

While campaigning for his party during the Punjab assembly elections two years back, Delhi CM Kejriwal had threatened publicly that when AAP wins and forms a government he will personally catch hold of the Akali Minister by the collar and drag him to jail for his alleged involvement in drug trade. Can a chief minister assume the role of the police and the investigating agency? Does it behove a minister or chief minister to say and do so?

Then Statehood for whom — the politicians or the people?