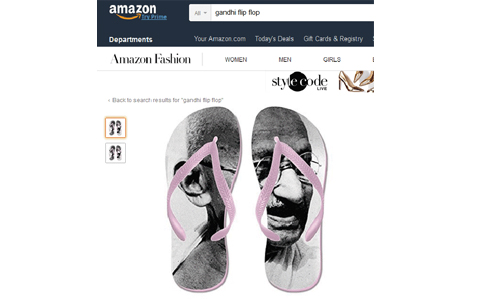 The companies in the West either have the belief that once they put the image of a Hindu God on their product the Gods will bless and the sales will be massive or they do it to get free publicity, knowing that the Hindus, almost three crores settled abroad will surely protest and demonstrate, and everyone will come to know about the product.

The regularity with which companies put images of Hindu Gods on items like slippers or cisterns in bathrooms is blasphemous and they know it. Is it then more than a sales gimmick, they want to mock at the Hindu religion because it has numerous gods, the reason for which the West has never tried to find out?

It also raises the question why Gods or holy symbols of other religions are not used. One suspects knowingly Hindu gods are insulted time and again.

Sushma Swaraj deserves praise and thanks for taking umbrage at the Global e-commerce giant Amazon for offering for sale ‘Gandhi flip flops’, with the face of MK Gandhi printed on the slippers. This comes just days after the online retailer faced Indian ire for selling doormats with the Tricolour on them.

Amazon describes its ‘Gandhi flip flops’ as a pair of “foam rubber flip flops” with a “professionally printed” Gandhi face. And it costs $16.99, or about Rs 1,200.

The ‘Gandhi flip-flops’ as they appear listed on the Amazon US site. It was for the first time Swaraj took up an insult to India at the governmental level. Recently, the e-commerce site had been at the receiving end of threats from  Sushma Swaraj, who demanded Amazon to tender an unconditional apology and take down all products disrespecting the Tricolour.

“Amazon must tender unconditional apology. They must withdraw all products insulting our national flag immediately,” Sushma wrote in a tweet.

She warned that if they failed to do so, no Amazon official will be issued an Indian visa and all existing visas will also be rescinded.

A thoroughly chastised, Amazon promptly removed the product from its listing and expressed “regret” for offending Indian sensibilities.

“After learning of the product’s listing, we immediately removed them from the Canadian website and implemented measures to ensure that these products could not be sold on any of our other marketplace or websites,” the e-retailer said in a letter addressed to the Ministry of External Affairs. 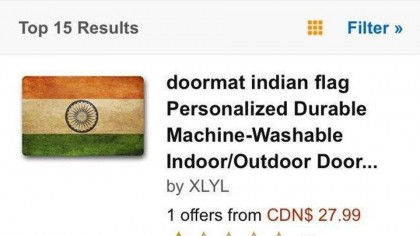 Now, following this second transgression, the Indian government has directed its Ambassador in Washington to convey to Amazon that they should respect Indian sentiments while providing platform for third party vendors.

Amazon had claimed that the Tricolour doormats on its Canada site were posted by a third party seller, and the organisation had taken measures to ensure that these products could not be sold on any of its sites. Hopefully, intervention by the Indian government will put some fear in others who have made their business to insult Gods.