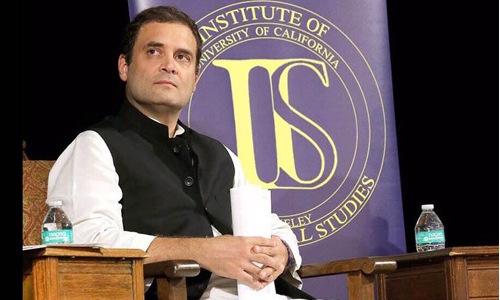 Congress Vice President Shri Rahul Gandhi has said that India has lost vision and it is being ruled by dynasty.

We would not have bothered if the Congress Prince had said this in India. He is entitled to make himself look like a fool and cut a sorry figure by his ridiculous statement – for which he is famous for.

However, we would like to take note of Shri Rahul Gandhi’s this statement and respond because he has chosen to make a blatantly anti-India statement on a foreign soil, during his interaction with the students of Berkeley University in the United States of America.

It is an established principle – since the days of yore – that none of our political leaders speak against the Indian Government while they are on a foreign soil no matter what is the intensity of anger and hatred they have against each other.

An incident from Mahabharat is pertinent to be mentioned here. It has come to be known as Dharmaraya Principle. This is being followed by very many politicians.

When the Prathama Pandava – Dharmaraya – comes to know that his arch rival, Duryodhana and a few others from Kauravas, have been kidnapped by Yadavas, Dharmaraya directs his brother Arjuna to go and rescue his brother, that is Duryodhana.

Arjuna was not only surprised but got enraged. “Duryodhana is our rival. We are fighting against him. You want me to go and rescue him. Are you mad?,” Arjuna asks his eldest brother Dharmaraya in a fit of anger. The king of Dharma, without, getting angry calmly gives an emphatic Yes reply. And he goes on to explain “Anuja Lakshmana, It is true that we Pandavas are fighting against Kauravas and Duryodhana is our arch-rival. However, all said and done we are brothers and share the same blood. Between ourselves – Pandavas and Kauravas – we are Five and they are Hundred. But before an enemy we are Five Plus Hundred, that is 105, “Vayam Pancha Adhikam Shatham”. So it is our dharma to rescue our brother from the hands of enemies. We can continue our fight later. First, go and rescue him and come.

“Vayam Pancha Adhikam Shatham” – is the time-tested principle with which our ancient land of Bharat has travelled. It is true that the kings fought among themselves but most of the times they had waged an united battle against a common enemy.  Whenever the kings have joined hands with the enemy, the country had stood defeated.

Alas, Rahul Gandhi is not aware of this principle – tested by time and trusted by generations. How can he know this? There is nobody to teach him, either at school or at home.

An incident in recent history – emulating Dharmaraya’s Principle – is worth mentioning.

Senior BJP leader Sri L.K.Advani was in US when Late P.V. Narasimha Rao was Prime Minister during 1992-93. Journalists asked Advani what he thinks of the new government. Advani’s reply should be a learning experience in diplomacy and state-craft.

“I would not like to say anything about My Government when I am on a foreign soil,” he said. Then there were two more questions. “You belong to the BJP and you have a Congress government ruling India. How can you say it is your government?”

Advani smiled and said, “It is My Government because it is Indian Government.” Journalists were perplexed. Advani continued; “We may have hundred things to say against each other. And rightly so. But we refrain from commenting against each other when we are on a foreign soil.” And he explained the intricacies and nuances of Dharmaraya Principle to the foreign journalists.

Rahul Gandhi would do well if he conducts himself with self-respect, dignity and decorum. He cutting a sorry figure is his problem and his funeral but on a foreign soil, he becoming a butt of ridicule will bring down the esteem of the India as a country. Somebody should tell him.

By S. A Hemantha Kumar