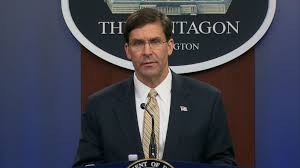 In his tweets, the President said, Christopher Miller will do a great job. Thanking Mark Esper for his service, Trump said he has been terminated.

Mr Trump has so far not conceded the US election to President-elect Joe Biden, and has vowed to challenge the projected result in court. In the weeks before Mr Biden takes office on 20 January, Mr Trump is still empowered to make decisions.