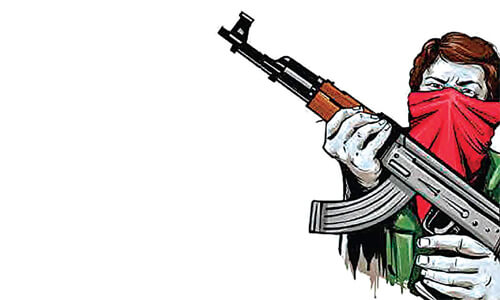 Coming straight to the nub of the matter, it is indisputable and unquestionable that urban Naxals who are either professors or lawyers or in any other profession cannot be allowed to disintegrate India by secretly colluding with foreign powers as we have been seeing happening actually in our country since last many decades! Supreme Court is hundred percent right when it says that every Indian has a right to dissent! But it must be added here that right to dissent does not and cannot include under any circumstances the right to disintegrate India by doing all those acts which directly threaten the unity and integrity of India and harm in any manner the supreme national interests of our country which cannot be allowed to be compromised under any circumstances! I am sure Supreme Court too will never permit anyone to say that right to dissent includes the right to disintegrate India!

No court not even Supreme Court of India, no government not even Central Government, no law, no Constitution, no Farooq Abdullah, no Mehbooba Sayeed, no Sanjeev Sirohi or anyone else can be above the unity and integrity of India under any circumstances! This alone explains why the freedom of speech and expression under Article 19 of our Constitution is also subject to certain restrictions and very rightly so! National interests must always reign supreme and not the vested political interests of any political leader or anyone else just because they threaten to envelope India in “a never ending internal war” if their anti-national demands are not met by Centre! Also if few parties boycott elections that will not sound the death knell of democracy in our country because there are other parties who will immediately fill the void left by them! But Centre must never surrender national interests in front of them and just like Pakistan has merged PoK with Pakistan must waste no time in ensuring the “full, firm and final” merger of the whole of Jammu and Kashmir with India! Centre must start treating J&K as an integral part of India and abolish all such laws which have only served to alienate the people of J&K from India! The former CJI JS Khehar had very rightly said while he was CJI that, “How can one nation have two laws, two Constitutions, two flags and two sets of rules?” But most unfortunately this is what has been allowed in our country since last more than 70 years which under no circumstances can ever be justified!

It cannot be lightly dismissed that Naxalites which started from a very small place Naxalbari in West Bengal has now spread its tentacles in nearly 20 states and this under no circumstances can be lightly dismissed! Why was this allowed to happen at the first instance? It is known to one and all that Naxalites want to overthrow democracy and usher in their own rule of ruling India at gun point! How can this be permitted in the name of “right to dissent”?

It is the bounden duty of each and every good citizen of India to ensure that full cooperation is extended to the government of India to crush Naxalism’s root and branch from each and every nook and canny of our country. Centre must also not fall prey to appeasing Naxalites by not undertaking any major operations against them in order to consolidate its own vote bank to win elections because this will certainly help them in winning elections in the short term but in the longer run it will ruin our country’s paramount national interests and will ensure that democracy is wiped out from our country in the coming years which will be most disastrous for our country! Can this be ever allowed to happen in our country? Certainly not!

Just recently we saw that defending the action against five activists in the Bhima Koregaon case, the Maharashtra government told the Supreme Court that the arrests were made because there was “cogent evidence” linking the activists with the banned Communist Party of India (Maoist) and not because of their dissenting views. The state government has filed an affidavit in response to a petition by historian Romila Thapar and four others who have said the arrests were aimed at muzzling dissent. The state’s response came in the backdrop of the Apex Court, while ordering the house arrest of the five activists on August 29 until Thursday, categorically stating that “dissent is the safety valve of democracy”.

To be sure, on August 28, Vara Vara Rao, Arun Ferreira, Vernon Gonsalves, Sudha Bhardwaj and Gautam Navlakha were arrested for suspected Maoist links and for being urban Naxalites! The raids were a part of a probe into a conclave – Elgar Parishad – held in Bhima Koregaon near Pune on December 31, 2017 that allegedly triggered violence on a large scale the next day! The affidavit says the five were not arrested for “dissenting views or difference in their political or other ideologies.” “They are involved in not only planning and preparing for violence but were in the process of creating large scale violence, destruction of property resulting into chaos,” reads the affidavit filed by ACP Shivaji Panditrao Pawar, Pune. The police also questioned the locus of Romila Thapar, economists Prabhat Patnaik and Devaki Jain, sociologist Satish Deshpande and legal expert Maja Daruwala, dubbing them as “strangers” to the probe in the matter.

Needless to say, police have dismissed the allegation of left-leaning intellectuals that arrests represented an attempt to curb dissent. “The material gathered from others based upon which the five accused persons named herein above are arrested, clearly show that they were involved in selecting and encouraging cadres to go underground in ‘struggle area’, mobilising and distributing money, facilitating selection and purchase of arms, deciding the rates of such arms and suggesting the routes and ways of smuggling such arms into India for its onward distribution amongst the cadres,” ACP Shivaji Panditrao Pawar of Pune Police said in an affidavit. He also revealed that, “Some of them have suggested training and laying of booby-traps and directional mines. They are also found to be providing strategic inputs in furtherance of the objective of armed rebellion as per the strategic document of the banned terrorist organization, named CPI(Maoist).” It will not be an exaggeration if I say that if what has been stated in the affidavit by ACP Shivaji Panditrao Pawar of Pune Police is actually true then these so called “left-leaning intellectuals” are more dangerous than Naxalites themselves because they are directly responsible for ensuring that Naxalites are provided help in all possible manner to kill innocents and to overthrow democracy from our country which is their real objective! How can any good and patriotic citizen of India ever support such anti-national acts under any circumstances?

Truth be told, while seeking custodial interrogation of the five, the Pune Police said that, “The house arrest merely restricts the physical movement of the accused but he can always ensure, not only destruction of evidence elsewhere, but can alert other potential accused while sitting in his home.” Pune Police also pointed out that, “The arrest of accused persons is also for the reason that they are required for custodial interrogation and prevented from not only destroying further evidence, but giving the leads to other accused persons to whom the investigating agencies could have reached.” Pune Police certainly has a valid point and all courts from bottom to top must always bear this in mind before ruling on such a sensitive case which has a direct bearing on the unity and integrity of India!

It also cannot be lost on us that submitting video and other alleged incriminating material in sealed cover for perusal of the court, the Pune Police said the five ‘activists’ were arrested as evidence pointed to the fact that they “were part of the criminal conspiracy and their role was not merely peripheral. Pune Police also pointed out that, “They were found to be playing a very vital role in the criminal offences committed and/or planned by others.” How can all this be lightly dismissed?

All said and done, truth must come out and will finally come out! No innocent must be harassed but no urban Naxalite must be spared just because he/she has strong sympathizers in not just the press but also in the judiciary! Under no circumstances can the few bunch of urban Naxalites be ever allowed to disintegrate India under the garb of “right to dissent” as this right can never include the right to disintegrate India and no court not even Supreme Court of India, no Constitution, no law, no Government not even Centre and no majority of people can ever allow this bulldozing of India on one ground or the other which our forefathers and freedom fighters gained after rendering supreme sacrifice for generations so that we can live our life as a free citizen of India! There has to be zero tolerance for all kind of terror groups and this includes Naxalites also and urban Naxalites too cannot be spared! They must either reform themselves or perish! They can’t have it both ways!