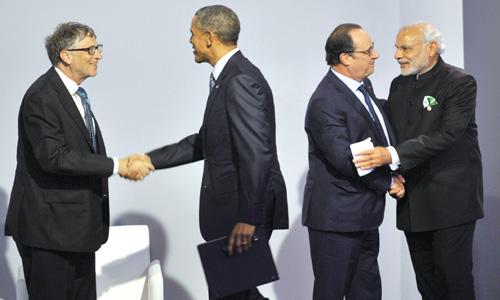 When I came to Delhi 37 years ago, Delhi was certainly much colder and cleaner than what it is now. Obviously, the world is becoming warmer with each passing year. One is told that 2014 was the hottest year in recorded history, but now it seems 2015 will break that record. It has been already calculated that the world is 2 degrees centigrade higher than what it was in pre-industrial days (late 19th century). This “global warming”, say scientists, is mainly because every year we inject more and more carbon dioxide into the atmosphere. And this injection of the poisonous gas is not because of any natural phenomenon; it flows from “human activities”. Once the temperature becomes hotter, there are more cataclysmic climatic events, such as hurricanes and floods, and events of greater severity and violence. Viewed thus, Prime Minister Narendra Modi had a point when he said the other day that the ongoing and unseasonal floods in Tamil Nadu were due to the impact of global warming.

Of course, experts and activists have been pointing out for years the disastrous consequences of the global warming. It will be foolish to ignore the lurking dangers. What then is the solution? Will the ongoing climate summit in Paris(concluding on December 11), be able to come out with a definite answer by narrowing down the divergent perspectives on the issue by the developed and developing countries, including India and China? Sadly, the recent history of the climate talks is not all that inspiring.

In essence, the global warming is the end result of the carbon-intensive energy that drives the human endeavours. The past international meets on climate have not been able to resolve this issue of curtailing the consumption of carbon-intensive energy. In fact, over the years, its consumption has increased. For instance, 41 per cent of the world’s electricity and 29 percent of the world’s overall energy is generated from coal. Add to this fact that the global crude oil production is increasing every year, not coming down. And all these are taking place in the name of the development.

I think Modi made a lot of sense in his speech during the inaugural meet of the ongoing Paris summit on November 30 when he said: “A vast section of humanity lives at the edge of poverty and in darkness after the sun sets. They need energy to light up their homes and power their future. And, they are also the most vulnerable to the consequences of an industrial age powered by fossil fuel. Access to energy and a better life is a universal aspiration. And, so are clean environment and healthy habitats. As the world’s majority works its way to prosperity on a planet left with very limited carbon space , we have to do many things…..The advanced countries must leave enough room for developing countries to grow. And, we must strive for a lighter carbon footprint on our growth path. For that we must come together in a partnership to bring clean energy within the reach of all. Innovation is vital for combating climate change and ensuring climate justice….. We need research and innovation to make renewable energy much cheaper; more reliable; and, easier to connect to transmission grids. We can make conventional energy cleaner. And, we can develop newer sources of renewable energy. This is a global responsibility to our collective future. Our innovation initiative should be driven by public purpose, not just market incentives, including on intellectual property. That also means strong public commitment by suppliers to developing countries. That will make clean energy technology available, accessible and affordable for all. This partnership will combine the responsibility of governments with the innovative capacity of the private sector. We will double our investments in research and innovation; and, deepen collaboration among ourselves.”

In his enthusiasm for the renewable sources of energy, which is least polluting, Prime Minister Modi has launched an international solar alliance of over 120 countries with the French president, François Hollande, at the Paris climate summit. “Solar technology is evolving, costs are coming down and grid connectivity is improving,” he said, adding, “the dream of universal access to clean energy is becoming more real. This will be the foundation of the new economy of the new century.” Modi described the solar alliance as “the sunrise of new hope, not just for clean energy but for villages and homes still in darkness, for mornings and evening filled with a clear view of the glory of the sun”.

Though most of the signatory nations to this new group hail from the tropics, several European countries are also on board with the initiative, including France. But, will this new group be “a true game-changer”, something that France’s climate change ambassador, Laurence Tubiana has hoped? Because, all told, the initiative needs a lot of money to be viable. The experience of huge incentives on the development of the technologies on renewable energy, be it solar, wind or tidal, has not been very encouraging so far. Unlike, say pharmaceutical and automobile majors, the global energy companies are reluctant to invest heavily on energy technologies, leaving everything to their governments. And here, the governments of the developed countries are not only spending less and less on this score, they are also not meeting the earlier agreed upon commitments to achieve the target of 0.7 percent of Gross National Income for Official Development Assistance(ODA) to the developing countries towards funding cleaner energy projects.

As the Economist magazine has said correctly, while radical innovation is the key to reducing emissions over the medium and long term, the sense of realism dictates that there has to be a multipronged approach, including the adoption to a hotter earth. For instance, Christina Back, who directs fission and inertial fusion programmes for General Atomics, argues in favour of a “Nuclear Future”. According to her, the largest source of clean, sustainable and reliable energy available remains nuclear power. “But to play a bigger role in reducing carbon emissions and air pollution, future advanced reactors must address four core challenges: They must be safer. They have to produce less radioactive waste. They need to pose lower risk of weapons proliferation. And they need to be less expensive”, she says.

Howard Herzog, a senior research engineer for the Massachusetts Institute of Technology, has argued that the most direct way to curb emissions of carbon dioxide, if not necessarily the simplest or least expensive, is to catch it before it enters the atmosphere. That process, called carbon capture and storage (CCS), consists of trapping the carbon produced by combustion of fossil fuels and then storing it, often in deep geologic formations. The primary targets for CCS are large, stationary sources, chiefly coal and natural gas-fired power plants, as well as industrial facilities including refineries, cement plants and petrochemical facilities. According to him, “CCS has three inherent advantages over other approaches. It works with our fossil fuel infrastructure and can avoid stranding hundreds of trillions of dollars of fossil fuel assets. It makes it possible to keep using fossil fuels, which produce constantly dispatchable power, as opposed to intermittent power from solar and wind. Finally, when the source of power is trees or crops, which pull carbon from the air, burning it at a facility that uses CCS can create negative net emissions.”

In his book, “The Carbon Crunch”, Dieter Helm, an economist and professor of energy policy at Oxford University, has argued the case for a mixture of cost-effective energy policies—go for gas, especially abundant shale gas—with a carbon tax and investment in clean technologies such as energy storage and electric vehicles. “Don’t cover hillsides with uneconomic wind farms; subsidising renewables can make energy production less climate-friendly, not more, because renewables need lots of continuous back-up non-renewable capacity”, he says.

For Helm, the basic rule for a sustainable economy is that “The aggregate level of natural capital should not decline.” This rule, he argues, gives meaning to the idea of sustainability: “it implies that we should pass on to the next generation a set of assets, natural and manmade, at least as good as those we inherited, even if humans have altered those assets. It should be the rock on which a sustainable economy is built. It would apply differently to renewable and non-renewable assets: the aggregate level of renewable assets would not decline, but the depletion of non-renewables such as coal and oil would be offset by compensation to future generations which might take the form of investing in assets that would improve the lives of the unborn, or by creating the sort of fund in which Norway has invested its oil money, or by spending on projects to save or repair renewable assets such as landscapes and habitats.”

I think that Helm makes a lot of sense.