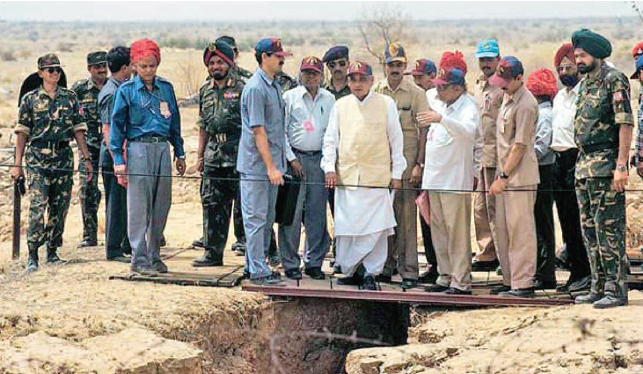 On May 11, 1998, when the then Prime Minister Atal Bihari Vajpayee, stunned the whole world by conducting nuclear tests in Pokhran Rajasthan, dodging the vigil of US’s satellites, and exhibited India’s nuclear capabilities. That day, the pride of all Indians was suddenly elated. Since then India has become a superpower equipped with nuclear weapons. In this context, India did not bother about how the US or other countries of the world would react to this endeavor. After that, when US imposed economic sanctions on India; the Indian government didn’t even ask to lift those economic sanctions, either directly or indirectly. The issue was that of honour of the country, to establish the country as a nuclear superpower and to prove its capabilities. Right in the beginning when the operation of nuclear explosion was first carried long ago in 1974, it was named ‘Smiling Buddha’ implying thereby that the objective of India to become nuclear power was not to attack any country or invade any country, its objective was world peace. It was not tothreaten any country, it was supposed to act as deterrent to those nuclear powers who boast their nuclear power and threaten others. After the Pokhran tests, Prime Minister Vajpayee defined India’s nuclear capabilities as ‘nuclear deterrent’. It was defined as the power preventing other countries from using nuclear weapons.

Double standards of US and other nuclear powers

When India conducted a nuclear test, other nuclear powers, including the US, criticized India for its breach of peace. There are 8 countries that have declared nuclear weapons in the world. US, Russia, Britain, France and China are the 5 countries that are part of the ‘NPT’ treaty, while three countries India, Pakistan and North Korea are countries that have declared nuclear weapons, however they are not part of the NPT. Another nuclear-armed country is Israel, which has kept its nuclear program a secret. Based on the available information, Israel has 90 nuclear warheads, the US has 6185 nuclear warheads, while Russia has 6500, Britain has 215 France with 300, China has 250 and India has 140 nuclear warheads. It is said that North Korea has 30 nuclear warheads. In such a situation, when the United States and other countries have a huge stock of nuclear weapons and they want to maintain their dominance over the world, we need to show a greater resolve to be strong strategically. That is why if any country of the world becomes stronger strategically, then they try to curb it in the name of world peace.

On 11th May 1998, India did not only carry out nuclear explosions, but also attacked at the arrogance of these countries. India did not pay any heed to economic sanctions imposed by US, after these tests; and after about 6 months, the US government was forced to withdraw all economic sanctions under pressure from its own companies. And after this, many more steps were taken by the Government of India for its strategic interests like space program, missile program etc.; but post 1998, America could not dare to show the same type of arrogance, as it showed in 1998 and then was forced to eat its words. It can be said that this was the first step towards a stronger India. It is not that the opportunity for Pokhran testcame only in 1998. In fact our scientists had made preparations for this type of test much earlier. But may be the governments prior to Atal Bihari Vajpayee‘s government could not muster that courage.

Today, when America on the one hand and China on the other, have been bullying, based on their strategic strength, India needs to be strong from the strategic point of view to protect its sovereignty. Atal Bihari Vajpayee had shown the courage to carry out an independent strategic policy through the Pokhran blasts. In later years, during the Congress rule, the nuclear treaty under pressure from the US compromised our strategic strengthto some extent.

In recent years, India has exhibited its strategic and diplomatic power, once again. India’s exit from the RCEP treaty despite all the pressures from China and Japan, outright boycotting of China’s OBOR plan, rejecting proposals for amending e-commerce, not accepting India-US trade treaty and amendments in patent laws, despite US pressure; there are numerous such decisions, that point to the political will of the government and independent diplomacy and economic policy.

Today, the India and the world are suffering under the havoc of the corona virus, which is also being called the Chinese virus. In countries around the world, there is a trend towards ‘self-reliance’ by ending dependence on China. Efforts are being made to run the economies of the countries according to the talent and ability of the countries. In this context Prime Minister Narendra Modi has also said that this virus has thought us the most important lesson, and that is, self-reliance.

May 11 is the day of pledge and resolve to constantly step up our independent economic policy, diplomacy and technology policy without any pressure. There are also signs of increasing tensions between America and China due to today’s pandemic. We must build strategic power free from international pressure in the interest of our country, while maintaining our sovereignty. The goal of Swadeshi, self-reliance and self-sufficiency will also have to be achieved through independent economic policy and diplomacy. Today, based on our youth power, entrepreneurship, scientific advancement and skills, we will have to move forward towards this goal. India will become the manufacturing hub of the world by virtue of its strength, our youth will get gainful employment, and development of our agriculture will also be possible by following this path.