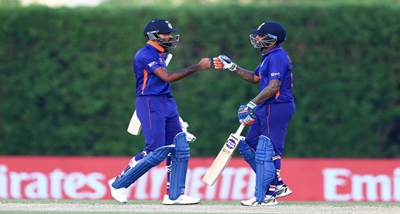 In the Men’s T20 Cricket World Cup, Bangladesh will take on Papua New Guinea at 3.30 pm while Scotland will face hosts Oman at 7.30 pm in the group stage matches today.

Yesterday, India defeated Australia by eight wickets in their second practice match at ICCA, Dubai. Australia set a target of 153 runs with the help of Steve Smith’s 57 runs. The men in blue achieved the target for the loss of two wickets with 13 balls to spare riding on Rohit Sharma’s 60 runs.

In another match, Sri Lanka thrashed Ireland by 70 runs in a Group A match at Zayed Cricket Stadium, Abu Dhabi to qualify for the Super 12 stage of the T20 World Cup.

In another Group ‘A’, Qualifier match at the same venue, Namibia won by 6 wickets over Netherlands. With this, the Netherlands were knocked out from Group A while the winner of the clash between Ireland and Namibia tomorrow will go to the Super 12s stage.