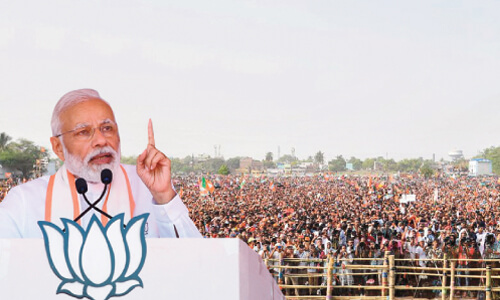 A bitter election, which is being fought, now is in final phases. The ocean of voting public veered towards booths right from 11th April to 19th May when it will settle in the sands of times quietly. Dominant feature of the campaign was a cyclone of abuse, maligning and descretion of the entire scenario of the electioneering. All norms of conduct were thrown to winds and garbage of lies will be found littered the landscape of politics once the process is over. Now it is possible to see the descending of the travel after climbing the top. I see clearly and intuitively, without any data, Modi has emerged in this election process as the colossus and no one can be his match or even stand closer to his stature in the present age.

Looking back one finds clear three phases of the opinions fluctuations-rise and fall of Modi wave. First wave rose but fell quicky with pubic opinion ebbing at a level where no one doubted that in absence of a leader Modi will form the government but he will not get majority of his own. The peak of opposition and low wave of Modi was when all leaders of opposition made a show of unity . The opinion polls that showed high rating of Modi started coming down in second wave.

The fall of Modi wave showed more and more opposition upsurge and Rahull’s idiotic but spirited propaganda on Modi chor hai. This phase was degenerated one and morally debased stage of Indian electioneering. Although no one believed it and even Supreme Court turned down initial approach. Shockingly, a puerile and moronic strategy ruined Congress rather than helping it and over the time its popularity was too hit. Again Rahall’s filing second nomination and entry of Priyanka in Varanasi only to exit unceremoniously in final stage brought down the rating of Congress in eyes of electorate. Second phase also witnessed the disintegration of so called mahagathbandhan which was formed with great gusto at Bengaloru. Mamta did not accept Congress in West Bengal.In UP Yadav and Maya did not want any alliance with them leaving only two seats for Congress and others. It was insulting and funny manner of forming alliance and Chander Bhanu Naidu was reportedly running to and fro while his own kingdom caved in and went into danger of being doomed.

In third phase of electioneering which we are witnessing now we see that Maha is non starter. In this column I had forecasted earlier that it will fail that happened. There are four views today prevailing amongst the crystl bal watchers. First BJP might be largest party but fail to get majority by its own.  Coalition will be formed, Second view is BJP might get majority but so low that it will need the support of others since it cannot run on its own easily.

Third view is that federal front concept when all the rest will join and form a federal government. It is not feasible in my view but still an option when BJP does not get sufficient majority. It is however not likely to happen looking to the past and present experience of various parties joining together.

Fourth view is what I think likely to happen in the present reckoning and very likely scenario. I had discussions with a large number of poll watchers at Delhi and came to conclusion that what ever the data BJP cannot get less than what it got last tie i.e.282. My logic is based on available survey figures as if we could BJP losing a few of seats it does not amount to more than 23 in UP, Punjab, chattisgarh, On the other hand BJP is gaining.First time its presence will be felt in the south India. It could be significatnt figure in Karnatka and Tamil Nadu.   BJP on its own will get around 290 and with NDA  300+ ,which could be around 320 to 330.

Modi would emerge as strongest leader despite cat calls of Congress, which will be itself facing existential issues. Rahul, Mamta, Maya, Kejriwal,Pawar,Chanderbhanu Naidu, Chautalas,and Mufti will fade away in the political blitz.  Opposition itself will be realigning and new leadership might emerge. Possibility of Telegudesham or Bengal playingmore significant part in Indian politics are strong. This election will write new chapter of Indian political scenario.