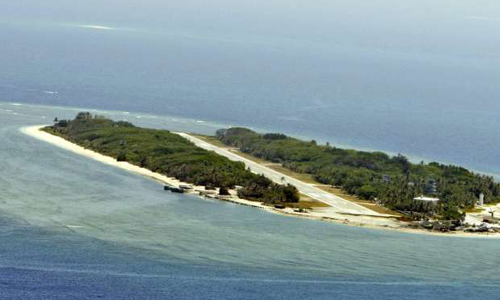 The much awaited ruling of the United Nations Permanent Court of Arbitration on the South China Sea (SCS) case brought by the Philippines against China over disputed maritime claims finally came on July 12, at The Hague.

Manila had taken the case to the tribunal in 2013, following Beijing’s overbearing and aggressive attitude in its territorial waters. China declined to contest the Philippines.  China expected the ruling to go against it as the nine-dash lines claim is a self-drawn map, so China went into propaganda made even before the verdict came out.

The Tribunal. Constituted under Annex VII of the United Nations Convention on the Law of the Seas (UNCLOS), made it clear that it does not rule on questions of sovereignty over land territory and does not delimit boundaries between parties.  But it gave its rulings and observation on several other questions, within its ambit of responsibility.

The Tribunal, however, rejected China’s claims on “historic grounds”, saying that the rocks, reefs and islands have been used by fishermen from ancient times and no country ever had administration over these features.  There was no evidence that China had historically exercised exclusive control over the waters or their resources.  The Tribunal concluded that there was no legal basis for China to claim “historic” rights to resources within the sea areas falling within the nine-dashed lines.

Dwelling on the definition of islands and other features, the Tribunal ruled that none of these qualified for the status of island and hence China did not have the right to claim an exclusive economic zone of 200 miles and the continental shelf.  Therefore, sea areas that are within the exclusive economic zone of the Philippines that are not overlapped, cannot be claimed by China.

China joined the UNCLOS in 1996, but conjured up the “historic” claim narrative to support its demand.  In fact. The nine-dash lines claim was originally made by the Nationalist government of China before they lost to the communists and based themselves in Taiwan.

The Philippines and Vietnam may be faulted for initially building artificial islands in the South China Sea but they stopped doing so.  China, in the meanwhile, has continued to build large islands with light houses and airstrips on some of them.  Building islands to ultimately transfer population is to create self-sustaining areas in the sea.  Claiming 200 nautical miles exclusive economic zone and continental shelf is not acceptable.  Yet, artificially changing geographical features is a tactic which is not new to the Chinese.  While negotiating river boundaries with the Russians, the Chinese were caught surreptitiously advancing their bank lines by shoring up mud from the river bed and dumping earth by cover of night.

The Chinese began to demonstrate their military muscle to the other claimants.  Beijing’s show of strength, especially its gunboat diplomacy in the waters of the sea spurred a small arms race in the region.  Although aware that they are no match for China’s military and economic might, these countries have undertaken defence construction for self-protection. 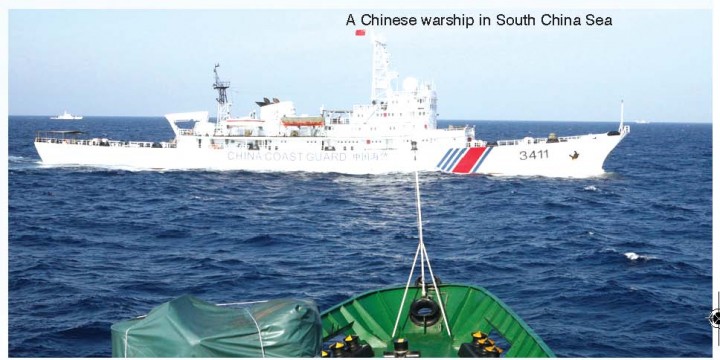 Kenneth Allen, a China specialist at the Defence Group Inc., USA, has recently written an article in China Brief, elucidating on China’s military transparency as employing soft power.  Demonstrating its awesome military might with a smiling face and dangling economic carrots before the claimant countries has had some effect beneficial to China.  China has enlisted the support of Cambodia and Laos, two countries of the ASEAN group.  Both countries have no involvement in the South China Sea issue but are now economically dependent on China, fearful of China’s might.  Other small countries dependent on Chinese aid may well have fallen in line.  As for Pakistan, it is an all-weather supporter of China and its stance on China’s claim will be no surprise.

India is a case of consequence here – for India not only has an interest in the freedom of navigation in the South China Sea as a global common, it also has a moral right to take a position.  India accepted a decision of this very Tribunal in a dispute over the Bay of Bengal claims with Bangladesh though the Tribunal did not uphold India’s claim.  This was a demonstration of respecting and abiding by International law.

India has called on all concerned parties to respect the Tribunal’s ruling and also to resolve the issue peacefully, meaning through dialogue.  At one level the Chinese have projected India’s position as supporting China’s position.  China wants dialogue as per the Declaration of Conduct in the South China Sea (DOC) signed in 2002 between China and the ASEAN.  But the DOC is a wide-ranging document and none of the parties, including China have strictly adhered to it.

That the DOC is a temporary arrangement to buy time till China was ready and certain that it could take over the South China Sea without any serious opposition was made clear by State Councillor Yang Jiechi.  In an interview to the Chinese media Yang said (China Daily, July 15) “The sovereignty issue is China’s bottom line”, adding that “China is willing to discuss temporary arrangements with other countries involved for partnerships for the development in the sea”.  He also warned that if anyone used the Tribunal award to provoke China, it would face a resolute Chinese response.  China’s conditions for joint development is that the partner must acknowledge China’s sovereignty first.

Commonly discussed importance of the South China Sea relates to the use of its maritime lanes through which US $ 5 trillion worth of trade moves including oil tankers, if need be, oil and gas reserves plus sea bed minerals; fish stocks, a major source of food and protein and foreign exchange earner and the employment the above activities provide.  Sovereignty projects China’s territorial expanse.

The South China Sea issue is also closely connected with President Xi Jinping’s strategic flagstaff “China Dream” projects which will conclude its first major step by 2022, when he is supposed to retire.  Xi’s “One Road” project includes the South China Sea since this “road” is marked to pass through this Sea to some of the South East Asian nations. 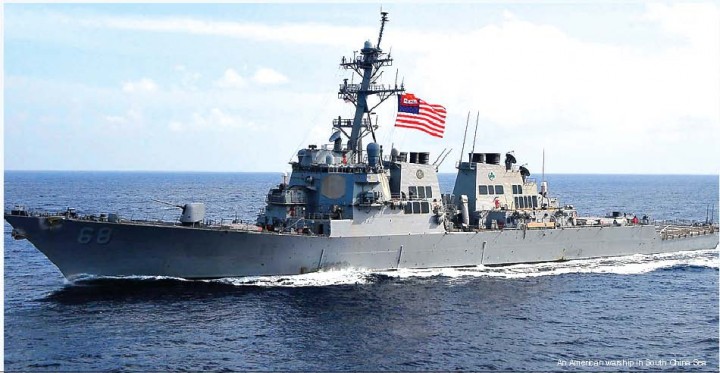 China claims its “One Belt, One Road” (OBOR) project is an economic endeavour and a “win win” situation for all.  But, in reality, it is much more than that.  It is a strategic project of soft projection on the one side, with a military underpinning on the other.  The US $ 45 billion Pakistan-China Economic corridor is a prime example.  In fact, small economically dependent countries who become part of this project, can fall potentially into China’s satellite orbit.  Again Pakistan, Cambodia and Laos can be listed here.  Eventually, OBOR can try to carve out a huge region between the West Line (Middle East) and the East Line (Asia Pacific).

These are long term projects which several countries including India, do not think important enough to worry about now.  It must be kept in view the even when China thinks up long term projects they achieve it sooner rather than later.  It was thought that the South China issue would generally become important after China achieved or forced unification of Taiwan with the main land.  But events have come in a rush.

In this area, China has two priorities (i) establishing near seas claims/sovereignty, and (ii) furthering far seas interest.  The Chinese authorities are quite sanguine that their land mass is secure except for intermittent irritation in Xinjiang and Tibet.  The current step is to secure the areas between the coasts to near seas.  A review of China’s missile and naval development at an accelerated pace suggests they are getting ready to thwart any external interference (read, the US) in the near seas, which includes the East Sea (dispute where it has with Japan).

Securing South China Sea means one step forward into the Indian Ocean, and constructing the 21stCentury Maritime Silk Road”, and strategic holding points.  They are already stepping up construction of a naval base in Djibouti.

Reportedly, they have already sounded out the Maldives and Seychelles.  Sri Lanka is a potential.  Pakistan’s Gwadar deep sea port constructed by China and managed by a Chinese state owned company, is always there.  Constructing a deep sea port in Bangladesh (in Panjra) has been discussed but not firmed up.

The importance of the South China Sea to the Chinese, and its consequences to the region and state holders needs no emphasis.  It should surprise no one if China decides in the near future to declare the South China Seas as of “core importance”, that is, at the same level as the Party, the state, Xinjiang, Tibet and Taiwan.

All counties concerned have advised caution, peace and constructive approach after the Tribunal’s award.  The new president of the Philippines, Rodrigo Duterte hoped to improve relations with China, but was yet to comment on the award.  Vietnam has decided not to confront China and is willing to continue to talk.

Power asymmetry and economic interdependence between China and the South East Asian countries is so great that these counties cannot get away from China’s shadow.  The only capable power in the region is the United States.  But with the US presidential elections just a few months away, and USA’s involvement in Iraq and Afghanistan and engagement in Syria, Washington is in no mood for a flare up with China.  Also, China and the US are deeply involved in bilateral economic relations. Japanese Prime Minister Shinzo Abe has strengthened his place and is in a position to gradually amend its peace constitution.  It is a long hand.  But Japan’s interest in freedom of navigation in the South China Sea is paramount.

China is concerned about a possible alignment of the US, Japan, India and Australia ranged against it.  They have been closely watching the Malabar naval exercises between India and the US and intermittently Japan.  This year, Japan became a permanent member of this annual exercise.  Relations between Japan and India are growing at an increased pace.

Things in South China Sea are likely to settle down for the time being.  But the ball is in China’s court.  It all depends on how  Beijing behaves from now on.  But what is disturbing is Beijing’s outburst after the Tribunal award.  Calling the Tribunal judge “corrupt”, accusing the Philippines and other countries (unnamed) of bribing the judges, shouting that the Sea had become a cradle of war and threating to declare Air Defence Identification Zone (AIDZ), does not inspire confidence.  China, however, is in the habit of using a hammer to kill a fly.

All said, China has lost credibility in the globalised international order conducted under international law.  How is that the UNCLOS is good when it supports China’s position, and bad when it does not?  China, a rising great power, has lost global confidence and muddied the waters.