Home >> Shot Down The Shop of ‘Secularism’
Editor's Note

Shot Down The Shop of ‘Secularism’ 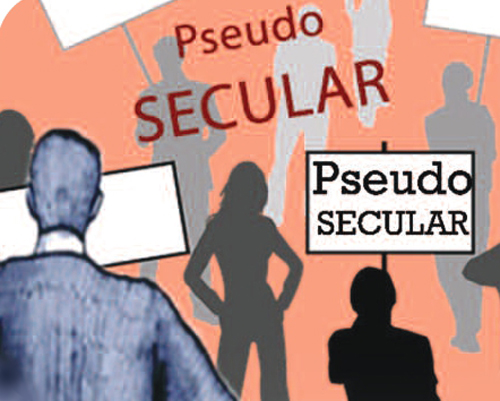 Unity in Diversity is a unique culture of this ancient land Bharat, which is not found in any part of the world. We celebrate diversity; we welcome debate; we welcome dissent; when we don’t agree, then we say let us agree to disagree. We take a stance: “I do not agree with what you say but still I will protect your right to have your say.” However, of late, too much emphasis is laid on diversity under the pretext of secularism, which often deteriorates to the level of mutual hate and sometimes takes anti-national colour. In fact, secularism is being used as justification for anti-national stance, to argue as fundamental right and freedom of expression. This is a dangerous trend that has potential for slow but sure dismemberment of our nation. This has to be avoided at all costs because nothing is greater & bigger than the nation. Political parties are adept in stoking passions among the people to garner votes; it has been the in-thing in our polity since decades. However, what is worrisome is the attitude of ‘secular’ brigade on the issues of national symbols, national anthem, national institutions, national icons and festivals celebrated by the Hindus. In fact, the brigade consisting of pseudo-secular and pseudo-intellectuals always maintain studied silence over issues concerning Hindus. Against this backdrop, it is apt to mention the barbaric mob lynching of sadhus at Palghar in Maharashtra, which shook the conscience of the nation. The incident that took place in the presence of police who were seen moving away from protecting the sadhus in the spine-chilling videos that became viral on social media gives scope for raising questions on the inaction by the Uddhav Thackeray government, supported by the Congress and NCP. What is more, the same ‘secular’ brigade shouted from the rooftop when a vegetable seller in Jamshedpur, Jharkhand, put up a board on his stall, which read as a Hindu vegetable shop. The government led by Hemand Soren and supported by the Congress left no time and booked the vegetable seller. On the contrary, the ‘secular’ brigade retreated in its cocoon and looked the other way when some Muslim goons harassed and abused some Muslim women on the streets for purchasing goods from Hindu shops in Davangere district of.Karnataka.

These instances bear testimony to ‘secular’ brigade’s anti-Hindu stance. In this perspective, it cannot be gainsaid that an average Muslim gets the message that no matter what he or she does, the sympathy is always on his/her side and it’s always the other side that is painted black. They are the ones who are constantly victimised and their rage is always justified: don’t forget the agitations all over India against CAA, though CAA has nothing to do with Indian Muslims. They are the ones who always need protection, accommodation, reassurance and a great level of understanding. They are the ones who should constantly be listened to and it’s their writ that must run, no matter how irrational, intolerant or violent it is. A section among them act like spoilt brats, and a lot of blame lies in the way the ‘secular’ brigade mollycoddles them. It is substantiated by the fact that it overlooked the issue, when a section of the Muslims argued that they have every right not to recite national anthem. Every sane and sober man in this country wants to know what is their problem in singing the national anthem?  It doesn’t belong to any particular religion; it has been accepted by the Parliament and incorporated in the Constitution. What objection anybody can have in singing the national anthem? And the most valid question that the millions of Hindus ask: Why the Hindus and Hindu festivals are always under attack? At unearthly hours, loud-speakers blare in high decibel level from mosques; it happens every day. Millions of sheep and goats are slaughtered during festivals. What happens to the waste? Has any responsible institution taken any action as precautionary measure to solve the issue? I think: No. People of Bharat wants the decision-makers of the land to be fair, objective, impartial, unbiased and professional with a holistic view of the issues after taking into consideration the practices, conventions, followed by the masses based on ethos, culture and tradition, which are in the interest of the society. One appeals and expects that let not the decision-makers get carried away by the cacophony of the pseudo-secular, left and kept intellectuals, for whom secularism is a euphemism for their anti-Hindu stance.