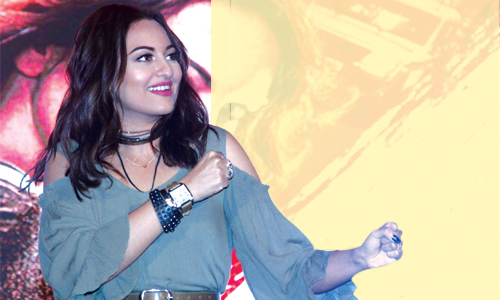 Actress Sonakshi Sinha, who will soon be seen doing action scenes in Akira, initiated a self defence training workshop at a Mumbai college. She says she is thrilled that colleges are taking self defence training seriously.  The trailer of Akira has received rave responses not only from critics, but also from cinegoers, especially the college going youth. Taking inspiration from the trailer, N M College (Narsee Monjee College of Commerce and Economics) here has decided to run a self defence workshop on their campus. The campaign was kicked-off by Sonakshi recently with the college students and faculty, read a statement.

Sonakshi, who took training in martial arts for the film, interacted with the students on the need for self defence training for students. She exchanged a few tips and basic training programmes which should be included in the campus workshops.  “It is so cool that NM college has decided to introduce a self defence workshop. I’m so happy and excited. It’s one small step for us and a big step for everybody. I am thrilled that my film ‘Akira’ has been able to make a difference and urged them in this direction,” Sonakshi said in a statement.