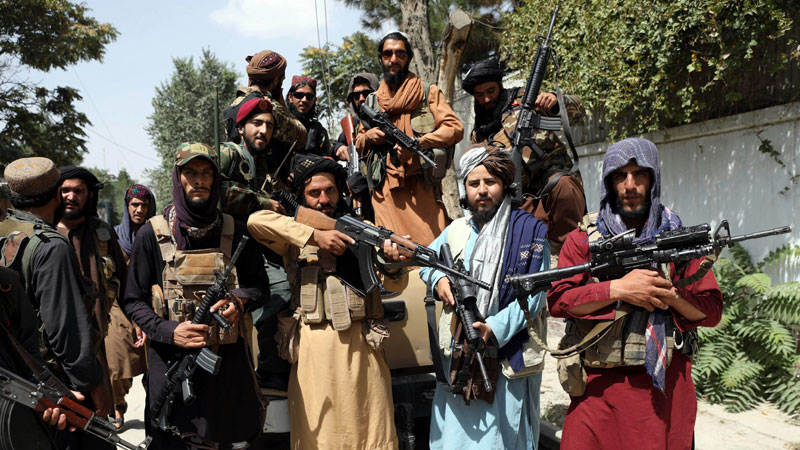 India must maintain a vigil against a resurgence of cross-border terrorism, particularly the return of Taliban in Afghanistan, that could quickly destabilize Kashmir as is evident from the Peoples Democratic Party (PDP)’s “politics of hatred” whose leader Mehbooba Mufti went on asking the Centre to take a lesson out of Afghanistan, and escalate conflict in South Asian region. New Delhi must deal with the internal separatist and communal forces with a stern hand sending them a message that India is a powerful country and capable of destroying terror groups like Taliban, Al-Qaeda, Lashkar-e-Taiba (LeT), Jaish-e- Mohammad (JeM) and Hizbul Mujahideen to maintain the sovereignty and territorial integrity of the country. The lesson of the Reemergence of Taliban for the citizens of a Country, vis-à-vis India is that Nation is primary; if the Nation exists, its people exist, and therefore the National Unity be guarded at every cost.

The recent dramatic events in Afghanistan have shocked India, which seemed quite unprepared like much of the world for a precipitous collapse of the Government headed by Ashraf Ghani.

The fall of Kabul as a result of the Taliban’s swift military operations has cleared the path for the insurgent group to establish the Islamic Emirate of Afghanistan. Currently, India and Tajikistan are the only two regional countries that are not formally engaged with the Taliban in talks.The recent chaotic developments including the recent attack on Salma Dam, the fall of Zaranj which connects Chabahar Port in Iran, Taliban sizing MI-24 attack helicopter, and the absence of invitation for some multilateral meetings on Afghanistan have been seen as a failure of India’s Afghan strategy.Likewise, the genuine warmth for the Afghan people and a deep commitment for their welfare might have prevented India from recognizing the weaknesses of the Government in Kabul. It should be noted here that India has provided humanitarian and development assistance of over $3 billion to Afghanistan in the last two decades.

Undoubtedly, the region has arisen national security concerns for India. In the past, anti-India elements have often used the ungoverned border areas near Durand Line to run terrorist training camps. Considering the history of Afghanistan and the character of Taliban as an Organization, India’s legitimate security concerns will persist. Further, the withdrawal of American troops and the closing of Consulates will deprive India of vital Intelligence, Surveillance and Reconnaissance capabilities. On the other hand, the increasing role vis-à-vis interference of Pakistan and China which have indicated that they might recognize the Islamic Emirate, adds to India’s concerns.

In the last two decades, trade between India and Afghanistan has registered an unprecedented growth; this has prompted a reimagination of land routes in the two countries. Afghanistan is situated at the cross-roads of the North-South and the East-West connectivity networks in the Asian Heartland. Instability in Afghanistan threatens regional connectivity projects. Therefore, the change in guard in Kabul may affect India’s trade with the region, at least in the short term. Besides, there is the threat of growing radicalization for pan-Islamic terror groups in India’s neighborhood. This happened in South Asia in the aftermath of the last pullout by foreign troops in Afghanistan, when the US backed Mujahideen defeated the Soviet army in the 1980s. It also gave rise to Al-Qaeda and IS after the US Wars in Iraq, and then subsequent pullout from West Asia, especially after 2011. India’s worry is also the Taliban governed Afghanistan itself. Taliban’s past record in power has been the history of erosion in women’s and minority rights, the overturning of a democratic system and the imposition of the Taliban’s brutal form of justice.

Delhi had also perhaps overestimated the domestic political support in Washington for a strong posture against the Taliban and the Biden Administration’s ability to manage the end-game of its plan to withdraw all troops from Afghanistan. While a post-mortem of the developments in Afghanistan must take place at an appropriate time, India’s current focus must be on addressing the immediate challenges confronting it in Afghanistan. India has four options, none of which are easy, nor without repercussions. First, India continues to stick to its principle of backing only a democratically-elected government in Kabul, and provide political and humanitarian support to it till that lasts. Second, despite Taliban spokesperson Suhail Saheen’s threatening of facing consequences, India must go ahead and supply the Afghan National Defense and Security Forces with military supplies, including ammunition and air power, possibly via the Iranian route. Third, India can decide to accelerate contacts with the Taliban. However, this is unlikely to give India much leverage, given the Pakistan factor, as well as the fact that all regional and donor countries have already done so. Fourth, India could simply wait and watch, until the chaos of conflict reveals a winning side, and weigh its options accordingly. This option seems expedient, but it also denies India’s relevance at the “high table” where Afghanistan’s future is being discussed. This was evident when the Modi government accepted the Qatari invitation to join “regional talks” with the Talibanin Doha, but the Ministry of External Affairs delegation found itself cut out of the opening session that included the US, China, Pakistan, Uzbekistan and the UK, as well as the Troika-plus talks of Russia-US-China-Pakistan, and was instead included in the session with Germany, Norway, Turkmenistan, Tajikistan and Turkey.

The fact of the matter is that for the first time in decades, India will no longer have a friendly government in Afghanistan. But India has significantly bolstered its borders in the past half-decade, and therefore, there is no fear of the repeat of the 1990s when the foreign fighters flowed into Kashmir from Afghanistan to fuel an insurgency. However, Taliban’s return will be a morale booster for Pakistan based groups such as Lashkar-e-Taiba, Jaish-e-Muhammad and Tehrik-i-Taliban Pakistan. It may be projected as psychological victory by the terrorist groups and they will use the situation to beguile more youth in places like Kashmir.

It is true that India will have to walk a diplomatic tightrope in dealing with Afghanistan. The biggest challenge India will face is whether to recognize Taliban Government or not. It shall get more tough if Moscow and Beijing decide to acknowledge the Taliban Government; Islamabad is likely to officially accept the Taliban Government as it did in 1999. The best option at the moment seems to keep a channel of communication open with Taliban. But it shall certainly be an uneasy relationship considering the history between Taliban and India, for example the Taliban’s role in giving safe passage to hijackers of an Indian Airlines Plane in 1999. India can also think of extending support to Panjshir Valley Resistance which stands strong against the Taliban.

The change is not all good for China and Pakistan too. China has economic interests in Afghanistan, which can fulfil its ever-growing need for minerals, but more importantly it can pressure the Taliban to ban the East Turkestan Islamic Movement, which it blames for unrest in its Muslim-dominated Xinjian province, to operate on Afghan soil. On the other hand, Taliban’s victory is a strategic win for Pakistan is a simplistic view, for the Pashtun-led Taliban has never recognized the border between Afghanistan and Pakistan, creating discomfort for Islamabad. In such a scenario, China and Pakistan “would piggyback on each other” in Afghanistan.

Taliban’s victory portends geopolitical realignment which could change things upside down; this has necessitated India’s close vigil on the growing ties between China and Pakistan. India’s concerns for cross-border terrorism have mounted with the return ofTaliban rule in Afghanistan. But India is better prepared than before in dealing with the Pakistan challenge, including the instrumentalization of Islamist movements to foreign-policy ends. The economic balance has overwhelmingly titled in India’s favor-at nearly $3 trillion, India’s GDP is now about 10 times larger than Pakistan’s. Further, as a non-permanent member of United Nations’ Security Council (UNSC), India will have a voice in shaping the international debate on the situation in Afghanistan. India also chairs the Taliban Sanction Committee of the UNSC and will have an important role in framing the international response to the Taliban’s demands for the lifting of all sanctions against its leaders. For this, India must also step up its diplomatic outreach to ensure policy coordination in responding to the “dynamic” situation in Afghanistan.