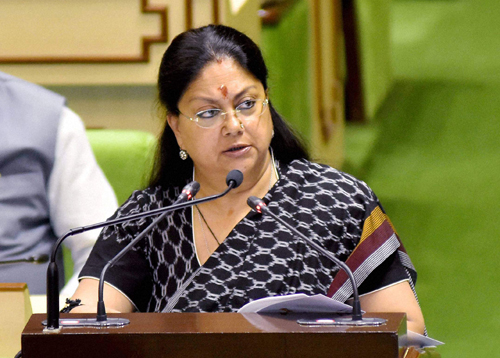 After facing fierce criticism from various quarters and massive uproar erupting over the controversial gag bill titled ‘The Criminal Laws (Rajasthan Amendment) Bill, 2017, the Rajasthan State Government finally decided to refer it to a Select Committee of the State Assembly on October 24. It seeks to gag or muzzle the press and shield judges and public servants from investigation into any wrongdoing and prosecution without its prior sanction. It proposes to amend Section 156 and Section 190 of CrPC. It was tabled in the State Assembly by Home Minister Gulabchand Kataria on October 23 to replace an  ordinance promulgated onSeptember 7.

Needless to say, the BJP leadership in Delhi is learnt to have prompted Vasundhara Raje to do a rethink on the controversial Bill. It has been reported in the media that a top BJP leader told Raje that the provisions which curbs the freedom of the media was “constitutionally unsustainable” and was likely to fall foul of the Constitution. It was also revealed by a source who was aware of the BJP leadership’s message to its government in the state that, “One could argue in favour of or against the provisions for prior sanction before prosecution, but the provision curbing freedom of media was constitutionally unsustainable. In fact, that entire provision curbing freedom of media in the Rajasthan legislation was beyond the reasonable restrictions requirement under the freedom of speech guaranteed by the Constitution.”

While craving for my esteemed readers exclusive indulgence, let me inform them that the Select Committee will have 15 members, including Opposition MLAs and will submit its report in two months after a “comprehensive review”. The report will be tabled in the next State Assembly session, which is likely to be in February 2018. No doubt, the Select Committee will suggest to drop some draconian provisions which have generated a hornet’s nest and attracted huge negative publicity from the media.

For my esteemed readers exclusive indulgence, let me also inform them that as per rules, the Select Committee considers the provisions of the Bill and can also obtain the views of experts. If a member disagrees with the decision taken by the Committee, he can record his dissent. The report of the Select Committee, along with the dissent note, is published in a gazette and its copies are circulated to members of the House.

To put things in perspective, in its current form, the Bill prohibits investigation without prior sanction against “a Judge or Magistrate or a public servant” for any “act done by them while acting or purporting to act in the discharge of their official duties”. Under its provisions, the media too cannot report on the accusation against such a person until the prosecution gets the go-ahead from the sanctioning authority, which may take up to six months. It needs no rocket science to conclude that such a prolonged time of six months will only afford ample opportunity to accused to make sure that all incriminating evidence against him/her is made to disappear and those who dare to speak the truth are either intimidated or purchased or liquidated!

Not stopping here, this controversial gag Bill further threatens to jail any journalist who dare to mention the name of any of the accused until permission is given within six months in either print or electronic or social media for not just one month or two months but for two years in jail and a fine. This is stipulated in Section 5 of the Ordinance. How can any sane person ever justify this? Are we once again being subjected to dictatorship like we saw in British rule? This cannot be justified under any circumstances!

No prizes for guessing the reaction and widespread condemnation that it attracted from all quarters. Journalists held a protest march and courted arrest against this draconian and controversial gag Bill while lawyers called for a day-long strike. In the courts too, the Ordinance has been challenged by at least three petitions.

It cannot be lost on us that the Select Committee is headed by the State Home Minister Gulabchand Kataria who is also the Minister piloting the Bill. This is certainly not a good development. This is at sharp variance with the procedure followed in Parliament – Central Ministers are not part of Parliamentary Committees. This must be corrected at the earliest but the billion dollar question is: Will Rajasthan State Government correct this? It certainly won’t.

No  wonder then that half-a-dozen writ petitions challenging the controversial ordinance that extends protection to public servants against investigation will come up for hearing in the Rajasthan High Court. While Sachin Pilot who is Rajasthan State Congress President and the People’s Union for Civil Liberties moved their petitions in the High Court’s Jaipur Bench on October 26, some activists and lawyers filed public interest litigation pleas after the State Government tabled a Bill to replace the ordinance in the Assembly. All the writ petitions have sought striking down of the ordinance with the contention that it infringes upon the constitutional rights of citizens and will encourage corruption.

Simply put, Pilot argued in his petition that the ordinance violated Article 14 (equality before law) and Article 19(1)(a) (freedom of speech and expression) of the Constitution by curtailing the powers of courts to order investigation on complaints made against public servants. It also goes against a five-Judge Constitution Bench order. In Lalita Kumari vs State of UP case, the Supreme Court had ruled that an investigation in a cognizable offence couldn’t be withheld and registering an FIR was mandatory. The controversial Bill usurps judiciary’s powers. It takes away the power of a Magistrate to direct police to register an FIR and probe a complaint, violating the basic structure of the Constitution.

In hindsight, it is amply clear that the Bill introduces provisions that takes away the Magistrate’s power against a public servant while discharging his official duties except with previous sanction. No one shall print or publish or publicise the name, address, photo, family details or any other particulars of a Judge or Magistrate or public servant against whom any proceeding under this section is pending until sanction is issued. A new Section 228B is inserted that makes disclosure of public servant’s identity a criminal offence with 2 years of imprisonment and fine, if convicted.

Truth be told, this controversial Bill has encountered stiff opposition not just from Congress and other parties but also from BJP’s own legislators. An officer of Rajasthan State Government while trying to justify the move said that, “The ordinance was brought to break the growing nexus between media, politicians and activists. The nexus is engaged in blackmailing activities. There is not a single bureaucrat in the state who has not received some sort of a threat of a false case. Many middle-rung officials have stopped taking decisions or are simply not signing the files.” There is a point but it certainly cannot justify such a controversial Bill.

It must be brought out here that before Rajasthan there was a similar Bill passed in Maharashtra titled Code of Criminal Procedure (Maharashtra Amendment) Act, 2015. But it was much less draconian. Under the Maharashtra Act, the time frame for granting a sanction to register a case against government officer is kept at 90 days, compared with 180 days in Rajasthan. Also, unlike Rajasthan’s controversial Bill, the Maharashtra Act doesn’t restrict the media from reporting the allegations against any Magistrate or government official while sanction is being obtained for initiating investigation.

Mind you, the State Government while defending the controversial Bill said the measure was required to put an end to what it called an end to frivolous litigations against public servants. Gulabchand Kataria tried to drive home his point by saying that, “The only aim of the ordinance is that people do not misuse Section 156(3) CrPC to tarnish the image of honest officers by leveling baseless allegations. From 2013 to 2017, 73 percent of the people who were probed under Section 156(3) CrPC faced mental harassment although they were not guilty.” The Rajasthan State Government also pointed out that the incidents, for which the First Information Report was registered, were fictitious in more than 70 percent of the cases in the past five years. Such false cases, it was pointed out, wasted the exchequer’s time and resources.

It was also disclosed that, “In more than 73 percent of the cases people were wrongly defamed. They had to bear mental trauma and approach higher judiciary.” But this is certainly no ground to bring in draconian provisions. Section 498A is also misused and this has been admitted even by the Apex Court but does it mean it should be abrogated? Certainly not.

To say the least, the Editors Guild of India urged the Rajasthan government to withdraw the Ordinance calling it “harmful”. It also slammed the Ordinance as a “”pernicious instrument” to harass the media that also bars the media from naming the public servant till the Government allows the case to be investigated. It said that, “In reality it is a pernicious instrument to harass the media, hide wrongful acts by government servants and drastically curb the freedom of the press guaranteed by the Constitution of India.”

What upset them most is that, “Rather than taking stern measures to prevent and punish those who indulge in frivolous or false litigation, the Rajasthan government has passed an ordinance that is bent on bludgeoning the messenger.”  It also made it clear that, “While the Guild has always stood for fair, balanced and responsible reporting of FIRs filed in courts of law, it believes that the remedy being employed by the Rajasthan government is draconian and gives it untrammelled power to even imprison journalists for reporting matters of public interest”. Legal experts have also criticized the move and also questioned the restrictions the Ordinance puts on freedom of the press.  Activist Bhagwat Gour filed a petition in the Jaipur Bench of the High Court challenging the Ordinance, calling it “arbitrary and mala fide”.

Truly speaking, AK Jain who is Gour’s counsel contended that by inserting CrPC Sections 156(3) and 190(1), protection from investigation for on-duty action has been extended to each and every public servant defined under any law – panches, sarpanches, members or office-bearers of cooperative society, MPs, MLAs, members of cooperation and employees of universities. He said the Ordinance is violative of Article 14 (equality before law), Article 19 (Freedom of Speech) and Article 21 (protection of life and personal liberty) of the Constitution. It was pointed out that it was “in contravention of fundamental rights as enshrined under Part-III of the Constitution of India.”

All this certainly cannot be brushed aside lightly. Even Rajasthan Government while initially rushing through the controversial Bill has finally woken up after facing huge opposition from many quarters and has referred it to the Select Committee. Such a controversial Bill should not have been tabled at the first place in the Rajasthan State Assembly! We are not now living in British colonial raj that press has to be gagged. Free press is the bedrock of our democratic system and if it is gagged then  we have just no right to call ourselves a democratic country in the true sense. Hope that good sense prevails on the Vasundhara Raje led State Government in Rajasthan and this controversial Bill is rollbacked. There is nothing wrong if you admit your mistake and it is never too late to admit it. All politics on this must be put on the backburner! Nation comes first and everything comes later! Press has to be always protected under all circumstances and gagging it on one pretext or the other cannot be justified under any circumstances!