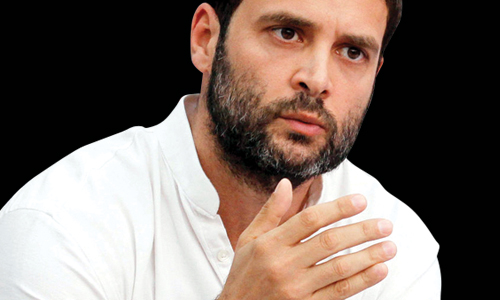 Even on the last day of his visit to his constituency Amethiâ€”prompted by the visit of his rival Smriti Irani who made fun of the missing MPâ€”Congress Vice President Rahul Gandhi, instead of fixing any loopholes in his support was keeping up his jibes and punches aimed at insulting Prime Minister Narendra Modi.

â€œI am a proud Indian like everyone else. All of us are proud Indians,â€ he said, taking a dig at the Prime Minister’s statement in China and Korea that had drawn widespread criticism on social media. The Congress had taken exception to the remarks. Reiterating his earlier suit-boot Ki Sarkar jibe, Gandhi said the NDA government was not for the poor but the industrialists. â€œThe farmers are in distress, affected by hailstorm, they have not received compensationâ€, but the government is busy helping the industrialists, he had told the media at the Lucknow airport. His suit boot ki sarkar jibe was scathingly criticised by many. They said â€˜Raja Babuâ€™ was childish and immature. One young executive in one of the top Banks in Lucknow said what else one expected from him! Poor man is the number one target of the cartoonist. Maximum number of jokes in India too targets him. Rahul was referring to Modi’s comments and his selfie with Chinese premier Li Kequiang which had drawn barbs from the Congress. â€œEarlier, you felt ashamed of being born Indian. Now you feel proud to represent the country,â€ PM Modi had said in Shanghai. â€œThere was a time when people used to say we don’t know what sins we committed in our past life that we were born in Hindustan,â€ he reiterated in Korea.

At the All India Congress Committee briefing former Union Minister Kapil Sibal said, â€œWe are really pained over the remarks as no leader in independent India has ever made such a statement.â€ RahulG also alleged that his constituency was not being treated fairly. â€œRepresentatives of all parties unanimously agreed that the Central government is not treating Amethi fairly, whether it is the PMGSY (PM Gram sadak Yojana) or the Indira Awas Yojana,â€ he said. He further accused the Prime Minister of cancelling permission for a massive food park in Amethi because of â€œpolitics of revengeâ€. But this was denied. It is said the licence was renewed seven times by the UPA and once by the NDA. Even then nothing was done by Rahul to start work. Now Irani is going back to Amethi on 26th. In the fight for the turf, it seems the Food Park will finally become a showpiece in Amethi.