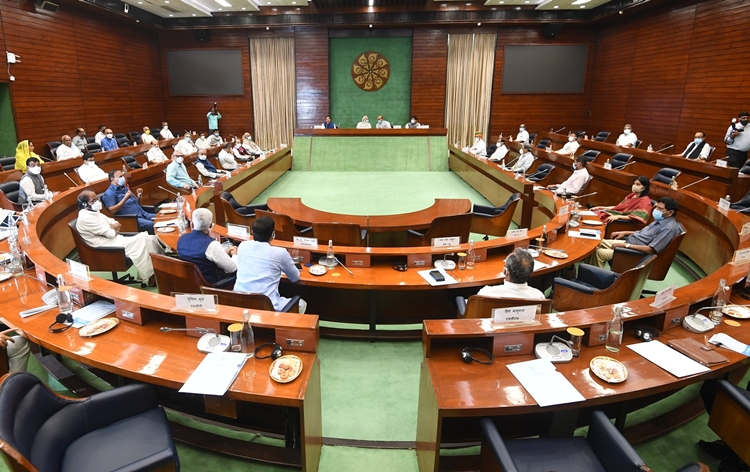 Prime Minister Narendra Modi has called for healthy discussions in the monsoon session of the parliament and sought cooperation of the leaders of all political parties. During the All Party Meet at Parliament House yesterday, Mr Modi expressed hope that the sessions will runs smoothly and completes its work. The All Party Meeting meeting was convened to seek support of political parties to ensure smooth functioning of both the Houses of Parliament. Defence Minister Rajnath Singh, Commerce and Industries Minister Piyush Goyal, Leader of Congress in Lok Sabha Adhir Ranjan Chowdhury, TMC MP Derek O’Brien, and DMK’s Tiruchi Siva were among who attended the meeting.

During the meeting Prime Minister said that MPs have given valuable suggestions and there should be meaningful discussion in both the houses. He assured that efforts will be made to implement the suggestions collectively. He said that as per our traditions of healthy democracy, issues concerning the people should be raised in amicable manner, and the Government should be given opportunity to respond to these discussions. Mr Modi said that it is the responsibility of all to create such a conducive environment. He said that the people’s representatives truly know the ground level situations and their participation in the discussions enriches the decision making process. Mr Modi said that most of the parliamentarians have been vaccinated and hoped that this will help in undertaking the activities in the parliament confidently.

Lok Sabha Speaker Om Birla also chaired an All Party Meeting at the Parliament Library Building yesterday. Prime Minister Narendra Modi, Parliamentary Affairs Minister Pralhad Joshi, Congress Leader Adhir Ranjan Chaudhary, DMK Leader T R Baalu, BJD leader Pinaki Misra, TRS leader Nama Nageswara Rao and Shiromani Akali Dal – Harsimrat Kaur Badal among others attended the meeting. During the meeting, Mr Birla informed that all members will be given adequate opportunities to express their views within the decorum of the House. He informed the Leaders that extensive arrangements have been made for safety of the Members, Officials and the Media. Mr Birla appealed the Leaders to cooperate with the Chair in smooth conduct of the House. He said, an App is being developed which will be One Stop Solution for all parliamentary matters.

Talking to reporters after the meeting, Lok Sabha Speaker said, small parties will also be given enough time to raise their issues. He said, with the cooperation of leaders from all parties, there was 122 per cent productivity last time. Mr Birla said that the House represents the collective will and aspirations of the Country and it is the responsibility of the Members to voice the concerns of the people they represent amidst the decorum and rules of the House.