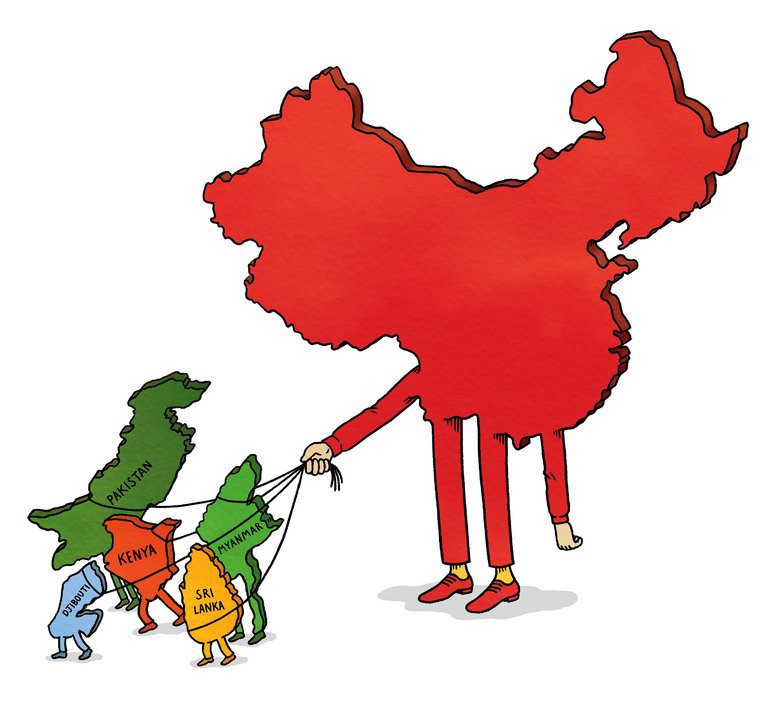 Chinese dip nets are well known, for centuries, in capture fisheries. Those nets are used in the shallow waters to catch the unsuspecting small fish. Now in the 21st century, the Chinese communist administration has designed the ‘debt trap nets’ to capture smaller countries in the neighborhood through a method of investment which is unknown and never practiced in the world earlier. Through these debt trap nets very small nations with limited financial resources, or such countries which were pushed into financial crisis by corrupt or selfish rulers are enticed to sign on the dotted lines to be permanently indebted to China. Even before people realize what hit them they are in the debt quagmire cleverly created by the moneyed China. Such countries which have already fallen in the Chinese ‘Debt Trap’ are struggling to come out of that trap but are not allowed by further tightening Chinese ‘Red Grip’. Such countries which resisted or resisting the predation by China are warned diplomatically in preparation to beat those countries into submission.

The latest warning to the Bangladesh by the Chinese ambassador “against joining the QUAD which the Chinese consider as anti-Beijing club is the exhibition of the China’s hegemonies mind set. The fact is that Bangladesh is neither a member of QUAD nor it has expressed its intention to join that organization.  None of the QUAD members-USA, Australia, India, and Japan- approached Bangladesh to join them. Facts being such, the warning of Chinese ambassador to Dhaka that “it is not a good idea for Bangladesh to join the small club” and threat of “damage to the bilateral relationship” is intriguing and leading to the suspicion of the intention of communist China . It is another thing that Bangladesh choose to retaliate Chinese ‘aggression’ as uncalled suggestion and asserted its “non-aligned and balanced foreign policy”. The statement of Chinese ambassador to Bangladesh Li Jiming in the diplomatic association virtual meet can’t be ignored as something made without a plan, considering the Chinese expansionist ideology which is in full flow in the Indo-Pacific region.

Unlike earlier way of conquering of lands and nations by sword or deceit, the Chinese have devised the money power way to colonize. Its military power being untested in warfare, the China has chosen the newly acquired money power to trap the nations into debt and then turn them into submission to achieve its ambition of ‘one and only super power of the world’. The Chinese debt trap for nations is eroding the sovereignty of those nations who have willingly or compulsively fell into that trap.

‘How China Lends’, book by a group of authors out in the market in the last week of March this year, has shed light on the exploitative lending practices adopted by that country. The authors of the book examined 100 0f loan contracts with over 20 countries and came out with critical observations on the lopsided contracts with minimum or no option for the borrowing countries. These are called as ‘one sided contracts’ in common parlance, where all the clauses are to the advantage of  the lender and the poor desperate loan seeker is forced to sign on the dotted line without out giving time to go through what is written in the small print. This is the practice in the Indian country side employed by money sharks.

As per that international study findings the many Chinese loans are secretive and not publicly disclosed. Since 2014 every contract has incorporated a sweeping confidentiality clause that compels the borrowing nation to keep the not only the terms of contract but even the very existence of such a loan from China. The clause insists it should be disclosed even to its own people on whom the debt burden falls and are responsible for repayment through their economic activity. The China inserted in its lending agreement a clause to scrap loans without notice and even demand dull repayment ahead of original schedule of repayment. And this power to cancel the loan or acceleration of repayment demand can be made if that smaller country disagrees with the domestic or foreign policies of China. The other clause is that borrower is forced to forego its power to restructure its loan by borrowing from any other nation or with the help of any other country, thus making the borrowing country a permanently dependent one on China in financial matters.

The international study team found out that what China is offering is not aid or low interest lending but it is infrastructure financing in the form of market loans and the interest rates are high when the borrower is in distress and demanding collateral arrangements. The infrastructure projects are conceived, designed and executed in tune with the Chinese expanding interests in that geographical area. In a way China is setting a base in that country without any obligation. The classic case is how China successfully secured 1,158 square Kms of Tajikistan in 2011 in exchange to for debt forgiveness. This area now developed into a Chinese military base, which is very close to the Afghan border and also to the China’s Belt and Road initiative. and aimed at projecting military power beyond China borders. The vacume created by the American withdrawal from the Afghanistan will be filled immediately by China though China officially denies any military presence in that base.

The other nations which are already in the ‘debt trap net’ of China includes Pakistan, Sri Lanka and Laos. The heavily indebted Sri Lanka was forced to lease out its Hambantota port with more than 6 thousand hectares of land. This is the most strategic port in the Indian Ocean which is now under Chinese control and is turning in a naval base of China. Saddled with huge debt to China, the Pakistan government conceded to China the exclusive rights to run Gwadar port along with a tax holiday. China convinced Pakistan the need to build its own naval outpost near the commercial Gwadar port. Pakistan has almost surrendered its sovereignty to China for the sake of financial assistance without which that country may collapse, as feared by many observers. The latest to be the debt trap victim of Chinese is the Laos. In return to the debts the Laos forced to surrender the control of its national power grid to a Chinese company. Along with the power the control of water resources may go into the hands of China as the water rich Laos hydro electrical power is one fifth of national power production.

China successfully targeted the small Indian Ocean Island nations and offered big loans initially and then converted those loans into acquisition of Islands through exclusive development rights. China already owns through debt rap net couple of islands in the Maldives archipelago and another island in south Pacific Solomon Islands.

The Chinese debt trap net story is crystal clear now. It is happy to lend money to financially vulnerable countries as it knows that heavier the debt burden of that country greater the leverage for China. Choose a poor or economic messy country in the Indo-Pacific area, enter that country as a benevolent helper and gradually capture the resources of that country and keep it as a undeclared colony under its perpetual control.

China’s target is India and its intention is to encircle India through this debt trapped countries. India is building up its own strategy to counter China but valuable time was lost during the Left supported UPA2 regime. It is over to Modi regime.