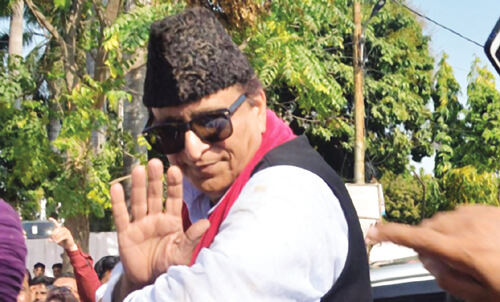 The election battle for Lok Sabha is witnessing a new low in electioneering. Recently, Samajwadi Party leader Azam Khan hurled a lewd remark at Jaya Prada, who is contesting against Khan in Rampur. And this is not alone, this election season has seen unparalleled personal attacks–from calling Priyanka Gandhi “Pappu ki Pappi” to saying that Hema Malini was made by BJP to “dance” to get votes. What is more, Karnataka minister BZ Zameer Ahmed Khan made fun of PM Narendra Modi’s appearance and stated that his wife left him because his “face was not good”.  Well, I come back to Azam Khan’s lewd comment, which not only shows Azam’s mentality, it also shows what kind of supporters he has and how sick is their mentality, who solicited delight in this disparaging statement. What has happened to these people? You may not support Jaya Prada or her party, but at least be conscious to condemn the nasty statement made by Azam Khan. Why should one talk on anyone’s sartorial preferences–men or women? This is low politics and Khan clarified that he didn’t mention Jaya Prada or talked about her. But I ask him: Why do you have to talk in that language? And it is clear that he was referring to her, as she is the BJP candidate from Rampur. You may have habit of disrespecting women, but we will not let you disrespect any woman. It is shame that to win election he went to this level. By abusing women, one cannot be a leader. It is really disturbing that Samajwadi Party tolerated his statements due to fear of losing minority votes. Having said this, it cannot be gainsaid that even thinly disguised misogyny was much condemnable act till very recently, but now, in the age of fake news and political fuzzy climate, anything, and everything seemed to be acceptable, and not much hue and cry is raised. Society has become much more materialist than that in years of struggle and sacrifice we saw during freedom movement. But what I see in this election is the peak of that decay, which we are witnessing in actions and speeches of the public figures. Social media has rendered it easy to indulge in filthy and polluted talk of persons in social field, especially politicians.

The present-day political leaders are becoming senseless by making vulgar and lewd statements. It is also alleged that the BJP, which is known as a cadre-based ideological party, also sometimes compromises with ethics and morality, as a few BJP leader commented on Priyanka Gandhi. So in socio political life, there has been a profound degradation of morality among political leaders, barring a few. The ideal leaders never leave their basic nature to achieve their ambition. They have clarity in their mind how to emulate or live the basic Dharma, rather than Karma. The purpose of true leadership has always been selfless service, not selfish service. But today politics has become a profession, and no more an ashram of devotion for a good cause. The leaders should follow the path of spiritualism, with a peaceful mind. When the Narendra Modi government assumed power at the Centre, the political system, governance and the character of the leaders were all in disarray. When one shifts to a new building to stay, one does not instantly start living there. One changes the house as per one’s likings, and accordingly, things move. Likewise, when Narendra Modi started his journey to run the Union Government, he started to cleanse the political system, modify the style of functioning of governance. Modi became the inspiration for millions. In fact, his work culture has a reflection on the world. Modi infused some sort of samskars with healthy mindset in the system of governance. These samskars are nothing but one form that is guided by principles. Against this backdrop, Modi is again facing the agnipariksha of Lok Sabha election 2019. One thinks he too will be keeping his fingers crossed.