The recent controversy over the expenditure on Congress president and UPA chairperson Sonia Gandhi’s health and foreign trips in the last eight years has predictably seen partisan reactions. The fact that it was raised by Gujarat chief minister Narendra Modi has evoked hysterical emotions to the subject, overlooking, in the process, the essence of the issue, which, in my opinion, is whether or not the health and visits of a public person should come under public scrutiny.

Sonia Gandhi is not an ordinary leader. She is the chief of not only the Congress party but also the ruling UPA. Besides, she enjoys the rank of a cabinet minister as the chairperson of the national Advisory Council, a post specifically created for her by the present government. In fact, no central government advertisement is complete without her picture. Contrary to the periodic denials by the Congress spokespersons, the fact remains that she is the most important and powerful person in India today. The Indian prime Minister, technically the country’s chief executive, is simply helpless before her. Senior cabinet ministers and bureaucrats take directives directly from her, bypassing the Prime Minister.

Normal governmental rules and procedures are often flouted when it comes to Gandhi and her family members. For instance, Mrs Gandhi and her son often use the special military aircraft, whereas the rules only entitle the President, Vice-President, Prime Minister, Defence Minister and Home Minister this facility. For instance, the other day one saw the headlines how an Air Force Pilot defied Defence Minister AK Antony’s directive by refusing to fly the aircraft carrying Rahul Gandhi in Assam because of bad weather. But nobody, not even our media, bothered to find out whether Rahul Gandhi was entitled to use such aircraft.

It is elementary in any democracy that its citizens do have the right to know how much money from the country’s consolidated fund (filled by citizens’ taxes and country’s resources) is spent. Thus, if any sum of money has been spent on any leader’s health and travel from this consolidated fund by the government, people do have a right to know the amount. It applies to everybody, whether it is Sonia Gandhi or Atal Behari Vajpayee. The other day I saw Minister of State for Parliamentary Affairs Rajiv Shukla telling a news channel that the government has spent nothing on Mrs Gandhi’s health. However, Shukla’s statement is not a complete answer as far as Mrs Gandhi’s expenditure is concerned.

Mrs Gandhi or her party might have paid for the medical expenditure, but what about her travel? And when one talks about her travel, it is not limited to her individual travel but that of her security team which she is entitled to have as a person covered by the Special Protection Group (which, incidentally, has been amended to cover her family, though normally the facility is exclusively meant for the Prime Minister, former Prime Ministers and their immediate family members—wife, husband, children below 21 years and parents—for 10 years from the day of demitting office. Going by the original SPG Act, the Gandhi family should have been out of the purview of the SPG in 1999, since Rajiv Gandhi was Prime Minister until 1989. But the then Vajpayee government amended the act by citing the security concerns and making a special case for the Gandhi family).

Whenever Sonia visits abroad, the SPG is authorised to incur the expenditure on the air travel and hotel stay of the SPG guards accompanying her as well as on the vehicles that are hired for her movements in the places she visits. It is equally true when Rahul Gandhi or Priyanka Gandhi or even Robert Vadhera goes abroad. These are legitimate expenditures and no one can object to that. But since the expenditure is borne out of the consolidated fund of India, it is equally legitimate for any Indian citizen to know this expenditure. The concerned citizen, of course, can be denied the details or breakups of the expenditure since that could compromise on the nature of the security provided, but there is no problem revealing the total amount.

Can there be any limits on the foreign visits by the persons covered under the SPG? It is a good question. Because, there are no such limits under the existing rules. While one cannot restrict the number of medical-related visits, what happens when an SPG beneficiary decides to go abroad strictly for personal purposes every second week? Why should the ordinary tax-payers of the country bear the expenditures for the unlimited personal pleasures of the children of their Prime Ministers and former Prime Ministers? In my humble opinion, there should be a rethink on this aspect in our SPG Act. There should be some limits on the number of their private foreign visits.

Let me go back to the health issue and deal with a very fundamental aspect. That is, whether in a democracy, the people have a right to know the health-conditions of their leaders. This is a question that is haunting many countries. The global media, for instance, was debating until last week the sudden disappearance from public of Xi Jinping, presumed to occupy the most powerful office (General Secretary of the Communist party) of China next month. Speculations over his health seem to have disturbed the future composition of the party politburo and standing committee, with the opponents of the Xi’s faction( supposedly close to the present party chief and Chinese President Hu Jintao ) bargaining very hard for their own candidates.

This year alone has seen four African Presidents—in Ethiopia, Ghana, Guinea-Bissau, and Malawi – dying because of illness, something they kept secret. They all went for medical treatment abroad. In 2010, Nigeria’s President Umaru Yar’Adua died after a long illness that had all along remained undisclosed to the Nigerian people. During his prolonged stay in a Saudi Arabian hospital, the regime in Abuja told the nation that their “dear leader” was on “holiday.”

It can be seen that all the above cases involve essentially authoritarian political systems. Here, the leader hides his health conditions because he otherwise fears that once his longevity is in doubt, his followers and loyalists will desert him, making his regime vulnerable to a coup. The news of his poor health could also ignite a popular movement, something that we saw in the so-called Arab Spring. In Tunisia, Egypt and Yemen, all the deposed presidents—Zine el-Abidine Ben Ali, Hosni Mubarak and Ali Abdullah Saleh – were really old and sick and that was an important factor behind their ousters.

Leaders’ health in democracies have also generated debates. It is wellknown how two Roosevelts, Kennedy and Reagan had kept their respective health-problems secret from the American public before assuming Presidency. Sir Winston Churchill had done likewise when he became British premier for the second time in the 1950s but was forced to pave way for Anthony Eden in 1955 when he could not suppress the news of his deteriorating health. While none of the American Presidents has quit because of health reasons so far, the fact, however, remains that the United States is a country where a President’s health bulletin is periodically made public and a President unable to do his job due to ill-health is required by the constitution to write and sign a letter informing the Congress of the fact. If he does not do that, the members of cabinet will write and sign a letter informing the Congress that the President is unable to execute his duties. In either case, the Vice President takes over until the President is fit or until a new President is elected.

The idea here is that if the head of the government is too preoccupied with his or health issues, he or she cannot govern the country well. That is why at the time of election, people in India should have a right to know the health of their chief ministerial and prime ministerial candidates. In fact, it is said that India’s partition in 1947 could have been avoided had people, particularly Mahatma Gandhi, known that Mohammad Ali Jinnah was sinking because of tuberculosis; he could have been placated by making him the first Prime Minister of the independent but undivided India.

The moral of the story is that people of India do have a right to know the state of health of Sonia Gandhi. She may not be the Prime Minister, but, as I have already said, it is she, not Manmohan Singh, who, in reality, governs India at the moment. 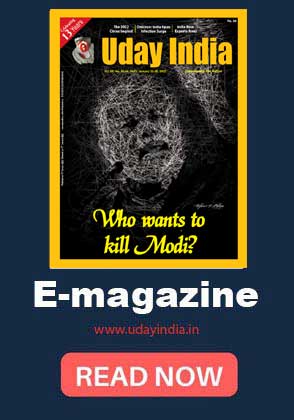