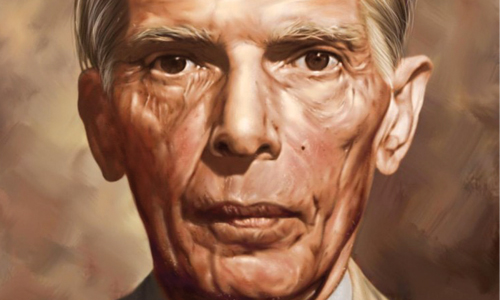 It is still a disputed idea, whether Jinnah had actually become a devout Muslim in his latter days of life, nevertheless he certainly was an ardent torchbearer of Muslim nationalism and Islamism. So even after becoming the Governor General of Pakistan he repeatedly called Pakistan a Muslim nation, an Islamic nation

After persistent efforts of many academicians and intelectuals , Jinnah’s image of a rabid communalist and a Muslim separatist underwent a metamorphosis to a man with a secular vision. An impression is being created that after foundation of Pakistan, Jinnah was a changed man, who did not want Pakistan to be an Islamic state but rather a secular state with Muslim majority. An eminent historian commented on Jinnah’s so called change of heart with this coupletMere quatl ke baad usne jafa se tauba ki. (After killing me he swore never to cause pain).

But, did Jinnah ever regret his mistakes and became a secularist? Unfortunately, his speeches indicate otherwise. Liberals, though point towards his oft repeated two speeches that suggest his secular outlook. The first, speech which was delivered by him on 11th August, 1947 before the Pakistan constituent assembly, became very famous after Advani quoted it during his Pakistan visit, You are free; you are free to go to your temples, you are free to go to your mosques or to any other places of worship in Pakistan. You may belong to any religion or caste or creed that has nothing to do with the business of the state … we are starting in the days when there is no discrimination between one community and another, no discrimination between one caste, or creed and another. We are starting with this fundamental principle that we are all citizens and equal citizens of one state. Jinnah’s second speech, a broadcast to the United States (February 1948) was in a similar vein. He said about constitution of Pakistan , It will be of a democratic type, embodying the essential principles of Islam. Today, they are as applicable in actual life as they were 1300 years ago. Islam and its idealism have taught us democracy. It has taught equality of men, justice and fair play to everybody. In any case Pakistan is not going to be a theocratic State to be ruled by priests with a divine mission. We have many non- Muslims Hindus, Christians, and Parsis but they are all Pakistanis. They will enjoy the same rights and privileges as any other.

In both speeches, Jinnah nowhere mentioned word secularism but, still these statements very forcefully convey essence of secularism, freedom of faith and no discrimination between one creed and another. But can we assign more importance to these two pro-secular statements over plethora of pronouncements that address Pakistan as an Islamic state. In these statements, delivered after establishment of Pakistan he strongly advocates the idea of an Islamic state and contradicts his much lauded commitment to freedom of faith and equality before law. If we analyse his speeches and messages during 1934 to 1948 we may come to conclusion that during this period Jinnah not only became a Muslim separatist but he was also an Islamist or Islamic fundamentalist. It is still a disputed idea, whether Jinnah had actually become a devout Muslim in his latter days of life nevertheless he certainly was an ardent torchbearer of Muslim nationalism and Islamism. So even after becoming the Governor General of Pakistan he repeatedly called Pakistan a Muslim nation,an Islamic nation. He also emphasised again and again that the socio-political system of Pakistan would be based on Islamic tenets. These days, people who consider Islam as not only a religion but rather, an ism- which offers solution for every field of life and advocate a socio-political system based on Islam are called Islamist or Islamic fundamentalist. In this sense Hassan al -Banna, Sayyid Qutb and Maulana Maududi were Islamists. The only difference is that Jinnah was not well versed with the Islamic scriptures, jurisprudence, theology and history nor was he proficient enough in religious languages of Islam, Arabic and Persian. So he was not competent enough to speak orthodox religious idioms and terminologies. 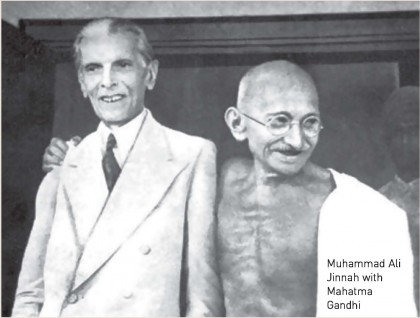 In an address to the Gaya Muslim League Conference in January 1938, Jinnah begun mapping out his new Islam centric world view. He said When we say ‘This flag is the flag of Islam’ they think we are introducing religion into politics a fact of which we are proud. Islam gives us a complete code. He returned to this subject more extensively in his Eid message in September,1945, saying the Quran is the general code of the Muslims. A religious, social, civil, commercial, military, judicial, criminal, penal code, it regulates everything from the ceremonies of religion to those of daily life; from the salvation of the soul to the health of the body; from the rights of all to those of each individual; from morality to crime, from punishment here to that in the life to come… Therefore Islam is not merely confined to the spiritual tenets and doctrines or rituals and ceremonies, it is a complete code regulating the whole Muslim society, every department of life, collectively and individually. So, with any stretch of imagination can we call a man like Jinnah secular, who insisted that his scripture is a code for every walk of life, collectively and individually? After all, secularism is an ideology which preaches that religion should be kept away from temporal life especially politics.

Before independence, a journalist asked Jinnah what would be form of government in Pakistan? Jinnah retorted immediately. It was already decided 1350 years ago. On another occasion, addressing a meeting of students, on March 19,1945, he cautioned communists to keep themselves away from Muslims as Islam is their only torchbearer and complete code of life. They did not need any other ism.

After independence, as head of the state he had founded, Jinnah talked in the same strain. It is my belief that our salvation lies in following the golden rules of conduct set for us by our great law giver, the Prophet of Islam. Let us lay the foundation of our democracy on the basis of truly Islamic ideas and principles. (Sibi darbar,February 14)- Do not be afraid of death. Our religion teaches us to be always prepared for death. We should face it bravely to save the honor of Pakistan and Islam. There is no better salvation for a Muslim than the death of a martyr for a righteous cause. (October 30, Lahore). He talked of securing ˜liberty, fraternity and equality as enjoined upon us by Islam (August 25, 1947); of Islamic democracy, Islamic social justice and the equality of manhood ( February  21,1948); of raising Pakistan on sure foundations of social justice and Islamic socialism which emphasised equality and brotherhood of man (March 26, 1948); of laying the foundations of our democracy on the basis of true Islamic ideals and principles (August 14.1948); and the onward march of renaissance of Islamic culture and ideals (August 18, 1947). He appealed the Lahore audience to build up Pakistan as a bulwark of Islam, to live up to your traditions and add to it another chapter of glory”, adding, “If we take our inspiration and guidance from the Holy Quran, the final victory, I once again say, will be ours” (October 30,1947). He appealed the armed forces to uphold “the high traditions of Islam and our National Banner” (November 8,1947). Not only these but there are many more speeches where Jinnah had declared that Pakistan would be an Islamic state based on Islamic principles.

Jinnah not only tried to evolve an idea of Islamic democracy and Islamic social justice, but also advocated an Islamic economic system. Speaking on the occasion of the opening ceremony of the State Bank of Pakistan on July 1, 1948 he criticised western economic systems for creating almost insoluble problems and a mess, worse than ever before in history and in this context he commended the State Bank research organisation to evolve “banking practices compatible with Islamic ideals of social and economic life” and appealed to “work our destiny in our own way and present to the world an economic system based on true Islamic concept of equality of manhood and social justice”

But, if you still think that Jinnah was a secularist then this quote from his speech will give you a rude shock because here Jinnah insisted on Islamic state and constitution based on Sharia.You will feel this is not the same Jinnah who had delivered the famous speech on August 11, 1947. Addressing the Karachi Bar association on the birthday of the Holy Prophet on January 25, 1948, a few months before he died, he declared Why this feeling of nervousness that the future constitution of Pakistan is going to be conflict with Shariat laws? Islamic principles today are as applicable to life as they were 1300 years ago Islam is not set of rituals, traditions and spiritual doctrines. Islam is also a code for every Muslim which regulates his life and conduct in even politics and economics and the like. A few weeks later Jinnah once repeated the same theme, using almost the same ideas and words. There was one more instance where Shabbir Ahamed Usmani reminded the assembly of Jinnah’s letter dated March 10,1945 to the Pir of Manki Sharif. In the letter Jinnah promised that the constituent assembly would enact laws for Muslims, not inconsistent with the Shariat laws, and Muslims will no longer be obliged to abide by the un-Islamic laws. In press statement made by Jinnah where he criticised Khan Brothers resolution for a free Pathan state. Jinnah said Khan brothers have raised another poisonous cry that PAC (Pakistan Constituent Assembly) will disregard the fundamental principles of Shariah and Quranic laws. This is again absolutely untrue. How can a state based on Islamic Sharia law be a Secular state?

The real face of Jinnah was somewhat different. He was against the idea of theocracy but never supported secularism and he always emphasised the idea of an Islamic state. He frequently talked about Islamic democracy but without bothering about the fact that Islamic philosophy and democracy are opposites to each other, because Islamic state must be guided by divine revelations, as in the Islamic scriptures Quran and Hadis and not by the will of the people which is the essence of every democracy. This mixing of religion and democracy does not fit into concept of secularism. A state based on the principles of a particular religion threatens the right of the people belonging to the minority religious groups. In the same way Islam and secularism cannot go hand in hand. As Arun Shourie says, Anyone who has slightest acquaintance with the Quran, with the Hadis, with the history of Islamic rule knows that the separation between believers and non-believer is of the very essence in Islam. Islamic scriptures award the status of Dhimmi (second class citizen) to non Muslims and impose  Jizya on them. Jizya is tax, to be paid by non-muslims living in Islamic state. But Jinnah never talked about what would happen to Islamic principles of Jizya and Dhimmi in the Pakistan of his dreams. Here the question arises, of how Islamist Jinnah can be called a secularist?

In context of all above statements, advocating Islamic state, Islamic democracy, Islamic economy and Islamic law, it seems that Jinnah’s statement about secularism is an aberration made out of political exigency. He might have thought that the denial of religious freedom to minorities in Pakistan could create problems for Muslims residing in India. Otherwise, the idea of secularism does not fit in his Islamist thinking.