Is Mamata losing Bengal to BJP? 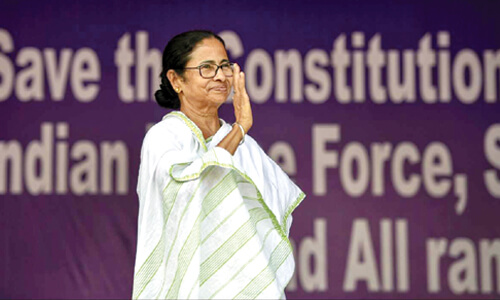 Recently West Bengal Chief Minister Mamata Banerjee staged a dharna against CBI raids in Kolkata,  which reminded one of her traditional politics. If one looks at Banerjee’s political career, it is only based on protests–from “Save Farmland” protest against proposed Tata Motor’s Nano plant in Singur in  2008 to provocative protest against proposed Special Economic Zone in Nandigram in 2007, which caused the death of 14 people by the Police Forces. Owing to these protests, in 2011 she succeeded to form the government in the state and became the 7th Chief Minister of West Bengal.

But this time, her protest was not for the people of West Bengal, but for Kolkata Police Commissioner Rajiv Kumar, who was summoned by Central Bureau of Investigation (CBI) in connection with the Rose Valley and Saradha ponzi scams. This whole drama started when a team of CBI officers was stopped from entering the residence of  Kolkata Police Commissioner Rajeev Kumar on 3rd February when they had gone to question him in connection with chit fund scam cases. Subsequently, Mamata Banerjee extended her support to Kumar and targeted Prime Minister Narendra Modi, calling it a conspiracy to defame her government. Some regional parties like DMK, RJD, TDP etc. also extended their solidarity with her.

However, when this matter went to Supreme Court,  Chief Justice of India Ranjan Gogoi, heading a three-judge Bench, categorically said, “We direct Rajeev Kumar to appear and make himself available to the CBI and faithfully co-operate with the CBI at all times.”

Now coming to the Saradha scam, this scam happened because of the collapse of a ponzi scheme run by Saradha Group,  a consortium of over 200 private companies, which were believed to be running collective investment schemes popularly but referred to as chit funds. Not only in West Bengal, but the Saradha Group was also active in the whole eastern India. It is worth mentioning that former TMC MP Kunal Ghosh and Mamata’s cabinet colleague Madan Mitra have already been jailed in connection with Saradha scam. Therefore, none can deny that the TMC leaders are not associated with the Saradha scam.

The question arising here is: When her Party associates were arrested in connection with this scams, she didn’t protest, but what compelled her to protest this time? So, it would not be incorrect to suspect Kolkata Police Commissioner Rajiv Kumar, who has been part of the Special Investigation Team to probe Saradha ponzi scam. 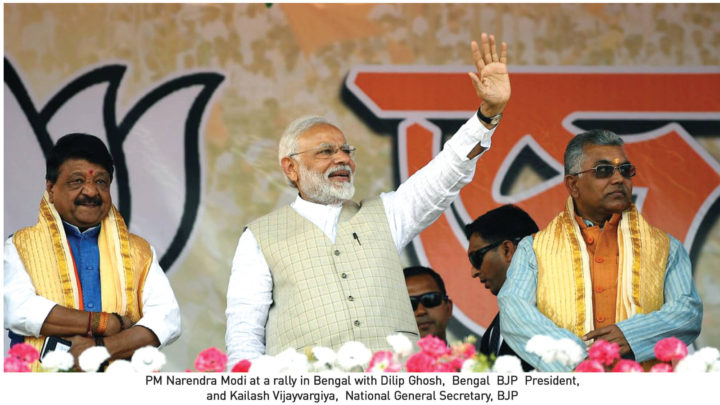 However, Rajiv Kumar’s grilling by CBI is not the elephant in the room, but the growing support for the BJP among the people of the state is the reason which is frustrating Mamata Banerjee. Within a few months, the country will elect new Prime Minister, and in this circumstance, Mamata Banerjee is dreaming of becoming the accidental PM like Chandra Shekhar Singh, 1990, and H. D Deve Gowda, 1996, as she knows that if she is succeeded in securing more than 30 seats in the state (her party won 34 seats in 2014), she would be able to project herself as the first choice of the Opposition for this post. Because in Uttar Pradesh–a decisive state for the Lok Sabha election–SP of Akhilesh Yadav and BSP of Mayawati are contesting 34 seats each out of  80 seats and BJP is already a dominant force in the state. Even the appointment of  Priyanka Gandhi as a general secretary of Congress having charge of eastern Uttar Pradesh will eat into the prospects of SP-BSP alliance because there might be shifting of votes from SP-BSP to Congress. Now one can say that BJP has more chances in the state than others.  So, it’s almost impossible for the two to get at least 30 seats in the state.

Even incidents like Singur and Nandigram have also projected her as an anti-business leader.

In 2014 Lok Sabha elections, vote percentage of BJP in the state was almost 17 per cent, which was 10 per cent more than that in the 2009 general elections. Now the probability of BJP is soaring in the state, so it’s obvious that BJP might get more votes in WB, which can boost its tally.   Mamata Banerjee is  aware of this fact. If BJP gains in West Bengal, it will not only damage her ambition of becoming Prime Minister’s contender of the Opposition but BJP will also immerge as the strongest Opposition in the state, which is also a threat for her party. Here it is vital to elaborate that in 2018 West Bengal Panchayat elections, BJP got unprecedented votes and gave a befitting reply to TMC at various places.  In Purulia, BJP won 633 Gram Panchayat seats compared to 780 seats by the Trinamool Congress. In Jhargram, BJP secured 325 Gram Panchayat seats as against 370 won by the Trinamool Congress. BJP too understands that it is gradually wresting Bengal from Mamata’s hand. And this is the reason why its star campaigners like Narendra Modi, Amit Shah, Rajnath Singh, and Yogi Adityanath are addressing rallies after rally.

Therefore, it is evident that the recently concluded dharna by Mamata Banerjee was totally political to gatherpeople’s sympathy.