Home >> Indo-Pacific conundrum What is Joe Biden up to?
Global Watch

Indo-Pacific conundrum What is Joe Biden up to? 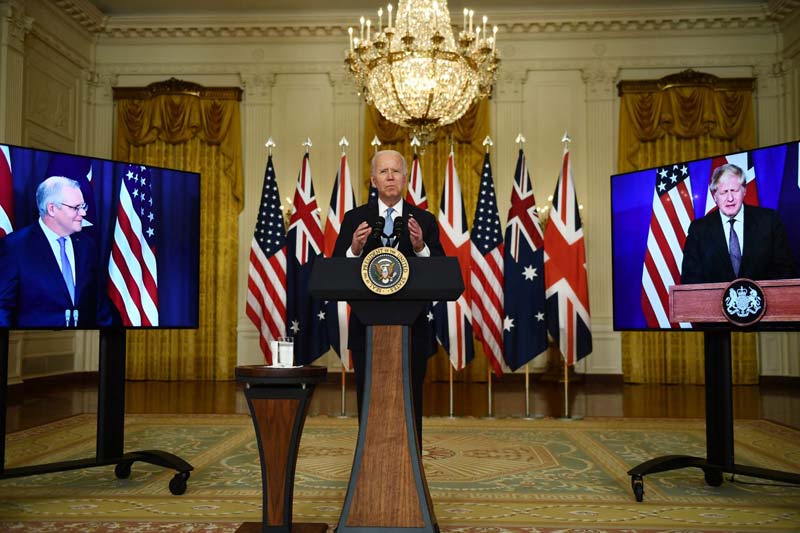 In a joint statement, US President Joe Biden, UK PM Boris Johnson and latter’s Australian counterpart Scott Morrison announced on Sept 16, 2021 that Australia-UK-US was forming a security alliance, nicknamed AUKUS, with stated objective to promote stability in the Indo-Pacific region. Biden said the three countries would update and enhance their shared ability to take on the threats on the 21st century. Though neither Biden nor the other two signatories specifically pronounced the source of the threat of the century, it is obvious that the threat is from China, the newly came into being the second largest and fastest growing economy and military power in the world, partly facilitated by the West under the leadership of the Uncle Sam since 1970s to counter balance their Cold War rival communist ruled Soviet Union.

Besides, China is a Communist ruled state whereas all others, who are vocal against Chinese on-going aggression -many of them being on the neighborhood of her-, are victims are in fact democratic states.

As a result of the alliance, Australia will acquire nuclear-powered submarines to counter China’s growing power in the Indo-Pacific region. Being in AUKUS, the three nations have agreed to enhance joint capabilities and technology sharing, integration of security and defense-related science, industrial bases and supply chains.

But, the diplomatic fault lines in this strategic alliance are: 1. The AUKUS announcement comes a week before the first in-person Summit meeting of Quadrilateral Security Dialogue or QUAD leaders comprising PMs of India, Australia and Japan apart from host country’s President Joe Biden scheduled to be held in Washington on September 24, 2021. The QUAD is the first anti-China grouping that has got fresh impetus in last two to three years when China’s People’s Liberation Army Navy(PLAN) started sabre-rattling the littoral countries of South China Sea claiming the entire marginal sea as part of China’s sovereign territory. And 2. Australia’s unceremonious cancellation of sub-marine deal with France although Morrison instantly rejected claims in French media that France President ‘Macron had only found out about the exit from Australian news reports’, and said ‘France remained an important ally’.

“It is a ‘big deal’ because this really shows that all three nations are drawing a line in the sand to start and counter the Chinese Communist Party’s (CCP) aggressive moves in the Indo-Pacific,” Guy Boekenstein, Senior Director of Defense and National Security at Australia’s Northern Territory government, told the BBC.

The timing of the new deal is particularly significant. It comes just a month after the US abruptly exit from Afghanistan with stated excuse to focus in Indo-Pacific when doubts have been raised in multiple quarters about US commitment in the region. Britain too is eager to be more involved in the Asia-Pacific especially after its exit from the European Union, and Australia is increasingly concerned about China’s influence.

Reacting on AUKUS formation, while Sibal opines “Allies undoing each other dilutes anti-China effort”, Guy Boekenstein says “It is a ‘big deal’ because this really shows that all three nations are drawing a line in the sand to start and counter the Chinese Communist Party’s (CCP) aggressive moves in the Indo-Pacific.” Now, the question is: Can any power or alliance in the world checkmate China without active participation of India and European Union in the effort?

Soon after coming to power, Biden Administration allowed US navy frigate voyaged through Indian Exclusive Economic Zone near Lakshadweep isles without intimation to India as mandated by United Nation Convention for the Law of the Sea (UNCLOS). And when the issue was raised by India, Biden Administration rejected the objection on the ground of Freedom of Navigation Operations (FONOB) which instantly gave opportunity to China to mock India, a QUAD prominent member. Here, it is to be noted that the US is not a signatory of UNCLOS. Irony is: while the US is not a signatory of UNCLOS, but tries to protect the same from Chinese encroachment in South China Sea; China, a signatory of the United Nation law, violates the same as per her wish.

And now Europe’s second largest economy France, which was part of the continent’s largest economy German-led team that negotiated EU’s Comprehensive Investment Agreement (CIA) in December 2020 –now the agreement is in cold store due to US discontent- with China, is humiliated by the US-UK-Australia. Will this not give an opportunity to China to mock France and EU for abandoning CIA, signed after long seven years’ negotiations?

India may not for time being dare to abandon the defense partnership with the US in view of prevailing geopolitical situation in South Asia, but EU does not have any such compulsion not to activate CIA which China desperately wants to revive her economy post-pandemic that is in fact detrimental to US’s super power status in world geopolitics.

Top French officials made it clear that they were unhappy with the AUKUS deal, which undercuts the French-Australia DCNS $36.3 billion deal signed in 2016. “The American choice to exclude a European ally and partner such as France from a structuring partnership with Australia, at a time when we are facing unprecedented challenges in the Indo-Pacific region, whether in terms of our values or in terms of respect for multilateSet featured imageralism based on the rule of law, shows a lack of coherence that France can only note and regret,” French Foreign Minister Jean-Yvas Le Drian and Defence Minister Florence Parly said in a joint statement.

And EU Foreign Policy Chief Josop Borrell said, “We regret not having been informed, not having been part of these talks”. The new alliance between Washington, London and Canberra overshadowed Borrell’s own announcement -made just a few hours ago- detailing a new Indo-Pacific strategy for the EU. The 27-nations bloc is looking to strengthen ties in the vast region where it says it is ‘already the top investor, the leading development cooperation partner and one of the biggest trading partners’.

The US’s recent past’s most politically experienced President Joe Biden may be following the diplomacy of ‘nothing else but nation’s interest matter’, but while dealing with Indo-Pacific region he should know that this policy is more dangerous to adhere to for his nation which wants to retain the Super Power status with “America Is Back” pronouncement on January 20, 2021, the day of world’s most powerful person took oath of office. Joe Biden policy will facilitate Xi Jinping to have the last laugh as the entire world watches China’s rapid filling of gap within days of US-led West vacating dreaded Islamist infected Afghanistan, which sponsored dreaded 9/11 attack on Super Power, on the western neighborhood of Indo-Pacific.