India has registered a landmark achievement in the fight against the global pandemic today. The ongoing trend of exponential increment in India’s total recoveriescontinues. The total recovered cases of the country have crossed a crucial peak of 95 lakh (95,20,827).

The chasm between active cases and recovered cases is continuously widening. Recoveries have surpassed the active cases by more than 92 lakh (92,06,996).The Recovery Rate has also increased to 95.40%. India is one of the top countries with the highest recovery rate globally.

The total Recovered Cases are more than 30 times the number of active cases. India’s present active caseload of 3,13,831 consists of just 3.14%of India’s Total Positive Cases.. New daily recoveries outnumbering new cases have ensured a consistent decline in the active cases along with increase in the total recoveries. In the last 24 hours, only 22,890 persons were found to be infected with COVID in India. In the same period, India has registered 31,087 new recoveries. Five States account for almost 52%(51.76%) of the total recovered cases in the country. 75.46% of the new recovered cases are observed to be concentrated in 10 States/UTs.

Kerala has reported the maximum number of single day recoveries with 4,970 newly recovered cases. 4,358 people recovered in Maharashtrain the past 24 hours followed by 2,747 inWest Bengal. 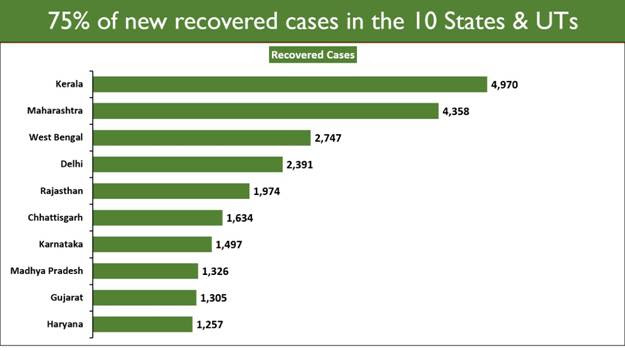 Kerala continues to report the highest daily new cases at 4,969. It is followed by West Bengal and Chhattisgarhwith 2,245 and 1,584 new cases, respectively. 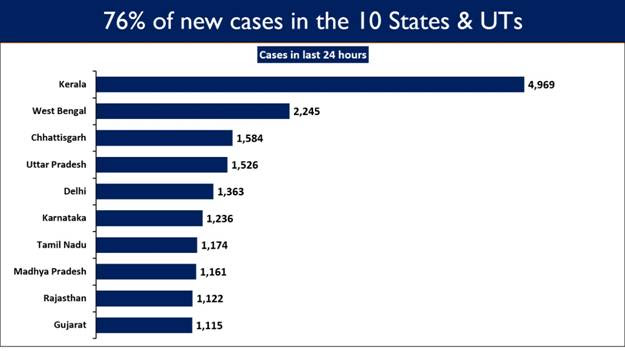 338 case fatalities have been reported in the past 24 hours. Daily deaths in India are on a sustained decline. Less than 500 daily deaths have been registered since the last 13 days.