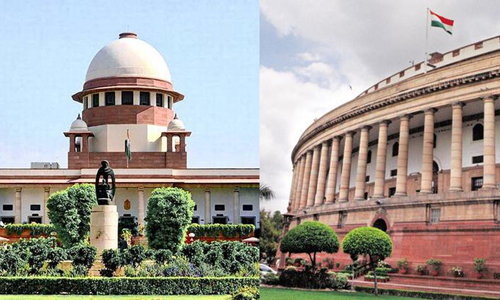 Although constitution itself had lot to be desired yet its shape has been disfigured by even by subsequent  85 amendements. More important was the framers especially Dr Rajendra Prasad hoped that those who use it would be honest to even give it better spirit. Unfortunately, it is proving to be vain hope.  Today when the Supreme Court’s chief justice is facing impeachment motion we are passing through horrendous times when even highest body of justice is under a cloud. Never the judiciary reached such nadir point and never political parties drove their campaign to gain power to such low level. All right thinking citizens of the country must raise their voice against deteriorating psycho sphere. All political parties are responsible for it but main failure is of opposition in coming to table to find a solution and cooperating in the wider national interest. Perhaps much worse plight was faced when Justice Ramaswamy created such a situation and in his case an enquiry against him had proved 11 out of 12 charges. Travesty of truth is that at that time Kapil Sibbal was defending him against the impeachment.

Justice Swamy was not only protected by a Congress walk out but also by rewarding him later with many assignments and lucrative jobs. He was supported by Congress and no one raised din.

Supreme Court’s case came much later but another institution viz Parliament of India also was mauled by the opposition party. No doubt the process had been started long back in small way by BJP itself when they held up the working of house. But such extensive logjam and such bitterness when nothing can work with some consultation never happened in the history of India. Take the case of Lokpal which prescribes the participation of opposition party and Mr Kharge, representative of Congress, after being nominated does not attend or agree to participate. The  budget did go through without opposition participation and no one bothered about serving the national interest.

After such a prolonged hold up of Parliament even treasury benches ‘sacrificing’ salaries of 23 days did not do justice to the national cause. But it showed that Parliament is becoming irrelevant or dysfunctional as made out by its own members. It is true that Congress is not able to put up with days without power as they had the sway for more than fifty years and are not used to being treated as empty vessel being incapable of effective operation. But democracy, which they are championing as if they have discovered it, needs accommodation of different views.  Nobody is going to trust Rahul for not being allowed to speak even ‘for fifteen minutes’. Democracy also needs authentic dialogue and discussion for arriving at consensus. In my view more false notions are spread more irrational propositions are in the narrative of nation it becomes a fit case to bring in

autocracy. To avoid it, those telling false things must be separated but unfortunately even Government is not doing it effectively to curb rumour and untruths. Modi has capability to communicate well but that does not fill the vacuum of hungry information seekers. He should build up effective communication system at all levels.  That is precisely not being done by them and yet they celebrate ‘Save Constitution day.’ You cannot save the charter if you violate its spirit and run an irrational shouting match with the ruling party or if the opposition party indulges in.

Look at the invasion on institutions. If the elections favour you there is no problem. No objection provided opposition wins otherwise the EVM is the culprit. So much of controversy was raised against the ECI that they had to offer free trial. If you lost UP elections EVM cheated you but if you won in Punjab EVM was alright but it was not so for AAP as they had doubts after keeping night gaurds on the stores.

If Congress candidate Ahmed Patel wins it is fine but if in state elections BJP wins there is EVM. Same is the case now in Supreme Court, If the case is lost the court is just if the case is won by other party the court is questionable. Suspicions is now raised on the highest body and if the petition against it rejected by the Vice President Petitioners start blaming him. Now they go back to the Supreme Court against the Vice President decision. It is same court that they thought not trust worthy for its Chief Justice.

Is it not travesty of truth that institutions of Parliament and judiciary as well as many other bodies under the constitution were the gifts of our great leaders led by JawaharLal Nehru? Then why his progenies are bent on tarnishing them ? Why India’s institutions are under siege by  its own people who refuse to work for preservation of same organisations? Why our value system is failing us ?