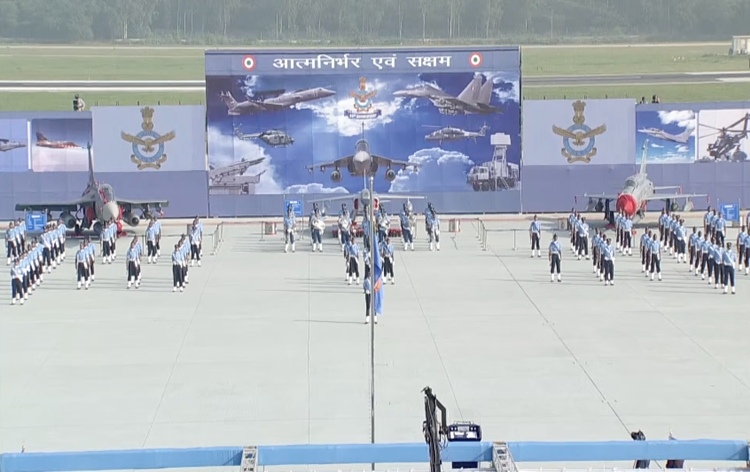 The Indian Air Force (IAF) is celebrating its 89th anniversary today. In the last eight decades, IAF has technologically evolved and grown in strength to thwart any threat to the nation. It is committed to safeguard the Indian skies and has played a key role in providing assistance to the people of the country during natural calamities.

To mark the occasion and in keeping up with the tradition, a scintillating air display by various aircraft is the hallmark of the Air Force Day Parade-cum-investiture Ceremony at Air Force Station Hindan in Ghaziabad today.

Chief of the Air Staff, Air Chief Marshal Vivek Ram Chaudhari reviewed the parade on the occasion. Addressing the gathering at Hindan airbase, the Indian Air Force Chief said, it is the sacred duty of Air Force to protect nation’s sovereignty and integrity at any cost. He said, the year gone by has been challenging yet extremely rewarding. He added that IAF’s efforts in completing COVID related tasks was a major accomplishment.

The Air Display commenced with flag bearing sky divers of the famous Akash Ganga Team dropping out of AN-32 aircraft in their colourful canopies. The flypast includes heritage aircraft, modern transport aircraft and frontline fighter aircraft. The ceremony concludes with spellbinding aerobatic display.

The Vice President in his message said, be it war or peace, our Air Warriors have always made the nation proud through their courage, professionalism and excellence. He said, may these winged warriors keep soaring bringing glory to the nation.