Home >> In West Bengal : Didi’s Changing Face Before, During and After Polling
Focus

In West Bengal : Didi’s Changing Face Before, During and After Polling 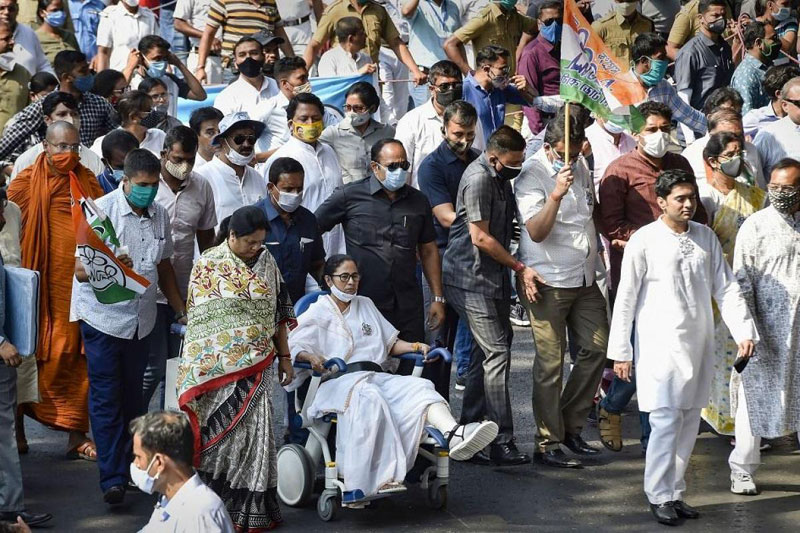 Political power, generally believed, is a great elixir of life. The latest living example is that of the West Bengal Chief Minister and TMC supremo Ms Mamata Banerjee. Because of an injury she received on her leg on April 01 she declared that she will campaign for the party sitting on a wheelchair. She did so till the last day of polling on April 29. This gave the impression that she was not medically fit to stand on her legs. The news of her party returning to power with a mandate greater than the last assembly elections instantly gave her a jerk powerful enough to make her stand on her legs to meet the media. Her recovery was a great matter of relief and satisfaction to one and all.

As the Election Commission (EC) of India announced an 8-phase polling schedule for the West Bengal, Ms. Mamata Banerjee came out with hammer and tongs against both the NDA government at the Centre and an institution of the Constitution, the EC. She went to the extent of demeaning the EC, by calling it a ‘BJP Commission’. She shot more than five letters to the EC highlighting her doubts over free and fair election in the State. She even opposed the deployment of Central armed forces to the State for the conduct of free and fair elections. The extent of violence that was unleashed before, during, and after the polling and declaration of results has only applauded the farsightedness of the EC decision to order an 8-phase polling and deployment of central forces. What would have been the situation had these two steps not been taken, it is anybody’s guess. No other State in the country has witnessed a violence of that magnitude and deaths in recent times as the West Bengal.

It was bad and sad that Mamata Didi was injured in an accident in her own vehicle on March 10, 2021 when she was on an election tour of Nandigram from where she had decided to contest the Vidhan Sabha election against her one-time top confidante and minister Suvendu Adhikari who had changed sides and joined the BJP.

Initially, Ms. Banerjee alleged that some five-six outsiders had pushed her when she was alighting from her vehicle. A complaint was lodged with the EC who sought a report from the WB State Election Commission. On consideration of the State EC report and the videos of the incident the EC came to the conclusion that the Mamata injury was “accidental” and that at the time of incident she was surrounded by a heavy posse of police personnel providing security to her. 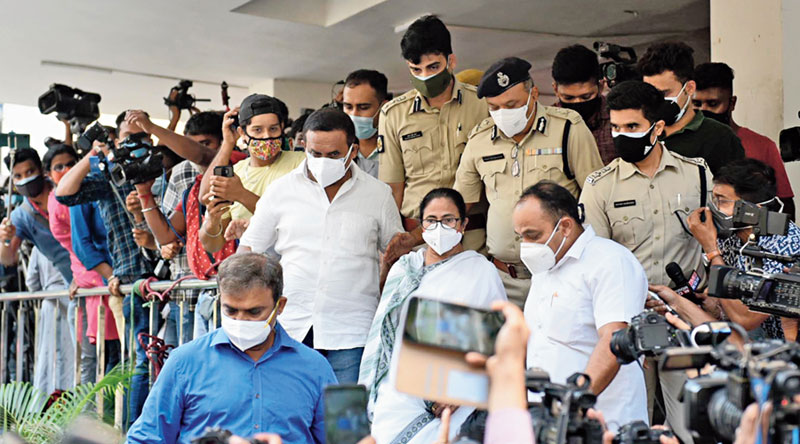 Ms Mamata’s decision to undertake party’s election campaign sitting in a wheelchair was a well thought-out electoral strategy to garner f sympathy of voters. This seems to have, to an extent, stood her in good stead.

Her example recalls of a similar game plan adopted by the then  Prime Minister Mrs. Indira Gandhi during the general elections held simultaneously to Parliament and State assemblies in 1967, as was the practice till then.  During the election campaign somebody threw a stone at her which injured her nose. Mrs. Gandhi conducted her party’s election campaign with a dressing on her injured nose attracting every voter’s attention. It looks this strategy also, to an extent,  paid her adequately well. She was able to secure a majority for her Congress in Lok Sabha, though less than the Party’s performance in 1962.  Congress lost power in many States giving birth, for the first time, to a new phenomenon of coalition governments in some States of the country.   In the new scenario that emerged in India’s politics the socialist and communist parties joined hands with the then ‘communal’ Jana Sangh to form non-Congress governments. For them, then, Congress was their ‘enemy’ No.1.

Ms Mamata Banerjee is, perhaps, the first chief minister of the country who led her party to a remarkable victory with a greater majority than the last Vidhan Sabha election (2016) but was him/herself defeated in that very election. But she also is the only person rejected by the people of her constituency, yet becoming a chief minister.

There are a number of instances in the country where a non-MLA sworn in as chief minister failed to get elected within six months.  In such cases, people’s verdict was respected and another individual was made the chief minister. But in the West Bengal case, peoples’ verdict was not honoured.

On April 01 Ms. Banerjee had filed a complaint with the EC where polling was held in Nandigram alleging irregularities in the polling process and presence of outsiders at a polling booth in the constituency. On receiving a report from the State Chief Secretary and State Election Commissioner, on April 04 the EC rejected her complaint as “factually incorrect” and “devoid of substance”.

Not only this, earlier in March Ms Banerjee had dashed 5 letters expressing apprehension of no fair and free elections in the State. She had called EC as “BJP EC” playing into the hands of the ruling party. She even objected to the deployment of Central forces which had been put on duty to inspire confidence amongst the voters.

The commission said it is a matter of deep regret that a “media narrative was sought to be weaved hour after hour to misguide the biggest stakeholders, which is the voters, by a candidate who also happens to be CM of the state”.

Before the final result of the Nandigram had been officially declared, Ms Banerjee tried to project herself as a great democrat expressing full faith in the electorate, by accepting what the people decided. “Don’t worry about Nandigram”, she declared. “I struggled for Nandigram because I fought a movement. It’s ok. Let the Nandigram people give whatever verdict they want, I accept that. I don’t mind.”

“We have won so big in Bengal,” Ms Banerjee told reporters on May 02 evening. ”I respect the verdict of the people of Nandigram.  Whatever their verdict is, I accept that.” She went on, “Whatever happened is for the best. I will not have to go that far regularly now, I am saved in that way.” At the same time, she added,   “But, I also feel there was some mischief as after the news of my victory came things changed….. I will later move court on this issue.” In the same breath, she changed the track when she said, “but I will go to the court because I have heard there were some malpractices.”

One of her confidantes and TMC MP Derek O’Brien lost no time in calling the Nandigram election results “fishy”.  Advancing a strange logic he wondered that a party wins nearly three-fourths of all the seats in the state and the Chief Minister loses her seat. ”Expressing “utmost respect for the chair of the Prime Minister and the Home Minister of India,” he said, “I am sorry to say that they have come here to Bengal and acted as thugs and cheapshots, who have come here and made catcalls.”

He expressed respect for the constitutional institution of the Election Commission but “not for the current people at the helm of affairs”. The (conduct of the) Election Commissioner, he said, “has been disgraceful and devious”.  His opinion is analogous to a person expressing highest regards for a chief minister but saying that the chief minister’s office (CMO) is as bad and corrupt as it can be.

TMC won 206 seats under the supervision and superintendence of the same members of the EC whom Ms Mamata called “BJP EC” and whom O’Brien after the election results called as having acted “as thugs and cheapshots, …….and made catcalls.” He also found their conduct “disgraceful and devious”.  Members of the EC would have perhaps been angels for both of them if they had ensured that TMC romps home with all the 292 seats.

It is the wont of the opposition parties to use the EVMs as the whipping boy for their rejection in elections. But surprisingly, this time, this element was missing though some of them before and during poll did air their apprehensions. In case the peoples’ vote went not in their way, they could say they had warned of it much earlier.  But Ms Banerjee did not miss the opportunity to allege that “EVMs were tampered with in Nandigram” where she was defeated at the hands of her former protégé.  She alleged that the returning officer rejected her request for recounting of votes “fearing threat to his life”.   Yet it was not on the directions CM Mamata Banerjee but that of the EC that security was provided to him.

After taking oath a prime minister or chief minister has never addressed the invitees to the swearing-in function. But Ms Banerjee broke this tradition and made a brief address after the oath. This prompted the Governor also to make an address.

The Governor, as head and first citizen of the State, did find time to rub balm on the physical and psychological injuries inflicted on a section of the people. The scene of bewailing men and women who fell on Governor’s feet to seek justice and protection was so heart-rending that he couldn’t help using his handkerchief to wash his tears.  But for TMC this action of the Governor was an “unconstitutional” conduct.  But it looks, for the CM and her party, it is not their ‘constitutional’ duty to condemn violence or to fetch justice to the bereaved families.

(The writer is a political analyst and commentator)