Home >> Has the era of pre-poll alliance come to an end?
Political Watch

Has the era of pre-poll alliance come to an end? 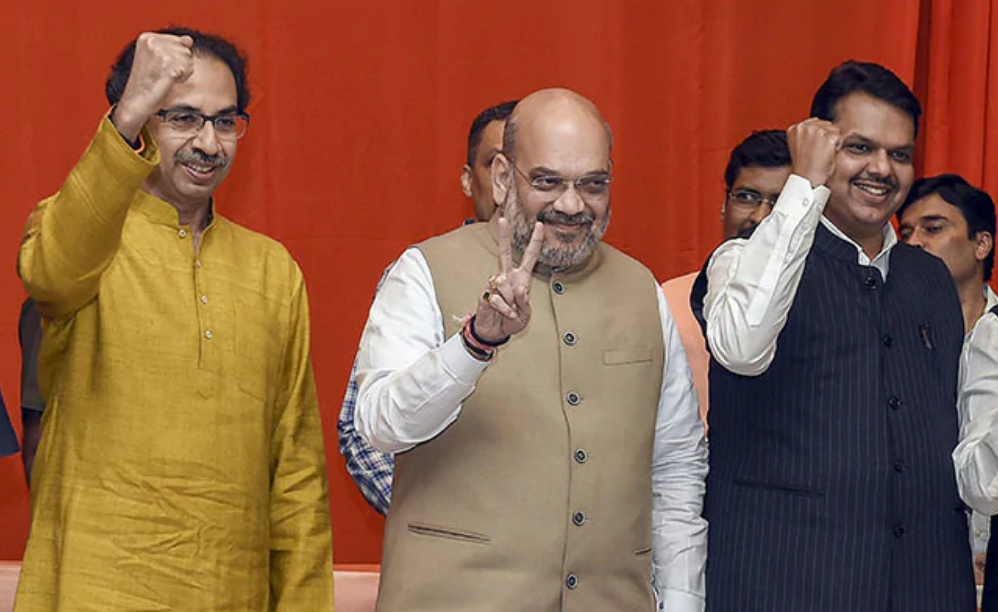 In recently-concluded Maharashtra elections, BJP-Shiv Sena alliance won an absolute majority, BJP secured 105 seats, Shiv Sena 56, Congress 44 and the Nationalist Congress Party 54. However, the ambitious Shiv Sena decided to go with NCP and Congress to get the post of Chief Minister after the election. Now the Shiv Sena-Congress-NCP post-poll alliance has formed the government in Maharashtra after a month of political stalemate. Before this, BJP’s Devendra Fadnavis had taken oath on the persuasion of NCP’s Ajit Pawar that some of his closest MLAs would support BJP in floor test to reach the magic number of 145. However, after three days Devendra Fadnavis resigned from the post of Chief Minister as he didn’t have the numbers, assured by Ajit Pawar, who returned to NCP.

Although, the Assembly elections in Maharashtra are over and the Shiv Sena-led Congress-NCP alliance has formed the government in the state. It cannot be gainsaid that this alliance will perhaps change the future of Indian politics. One of the biggest concerns is that morality and ideology have been sidelined after the elections in the state. Shiv Sena, which contested elections with BJP, decided to go with its rival Congress and NCP only to achieve the post of Chief Minister. It is worth asking here as to what will happen to the pre-poll alliance in future? Should it be assumed that the era of the pre-poll alliance has come to an end? Having said that, the alliance of Shiv Sena and BJP was based on ideology. Therefore, if they split soon after the elections, it’s really a huge jolt to our election system. We are a multiparty democracy. So, it’s obvious that various parties will contest elections in a state. And we have already seen that very few times, political parties are able to gain the majority in a state. Now the kind of coalition has been formed in Maharashtra and if this continues, people would never be able to elect the government of their choice and their votes will be useless at the end of the day. The post-poll coalition of NCP- Shiv Sena-Congress is totally against the people’s mandate. This mandate was for BJP and Shiv Sena. It was never for NCP and Congress.

The fact of the matter is that post-poll alliance is assumed to be a very expensive deal between two or more than two parties, which directly affects the governance, not politicians. And people are the biggest victim of this. We have already seen this in Karnataka, where Congress with 80 seats decided to support HD Kumaraswami-led JD(S) government, which had only 37 seats. In fact, the Congress did it to oust BJP which had emerged as number one party in the state with 104 seats. However, what happened to this Congress-JD(S) government? Both parties weren’t able to communicate well, and owing to this, various controversies cropped up pertaining to governance and cooperation. And within a year, the government collapsed. In another words, it would not be wrong to say that post-result alliance has always been an unholy alliance, where both or all coalition partners have to compromise on a range of issues.

Not only this, because of the breach in an pre-poll alliance, political parties are forced to go for horse-trading, which is really not good for a healthy democracy. However, it is important to redefine the meaning of horse-trading. Is running away from the pre-poll alliance for the post of Chief Minister is not part of horsetrading? In Maharashtra elections, the BJP-Shiv Sena alliance got mandate of the people. If Shiv-Sena uses that mandate for forming the government with the help of NCP-Congress alliance, who were rejected by the people, then can’t it be describe as the biggest horse-trading? And, can’t it be easily said that both NCP and Congress are equally part of this horse-trading?