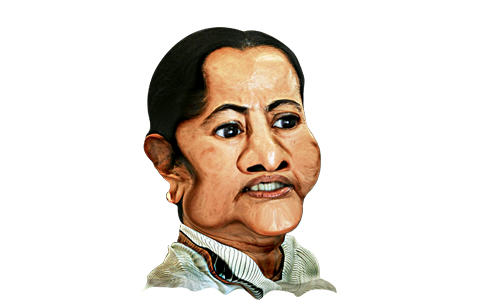 Mamta Didi is angry, in fact very, very angry, ever since demonetisation was announced on November 8, 2016. And her anger has been spiralling upwards as I-T raids have not spared even the powerful. Noticeably, she did not react when mining Czar Reddy was arrested by I-T officials but she got livid when the Tamil Nadu Chief Secretary’s house was raided. Describing government action as “Vindictive”, Trinamool Chief shot another arrow on PM Modi saying that the raid was “unethical, vindictive and technically improper action, is it only to disturb the  federal structure?”

After hearing the news ‘raid at Tamil Nadu Chief secretary residence’, she expressed her anger on government over twitter, “ Earlier the principal secretary of @ArvindKejriwal was raided and harassed. Now I read Chief Secretary TN also raided.”

She added that the government should follow appropriate procedures and have proper evidences of claims, before executing any kind of probes. Didi was angry, was she? Didn’t she read that Rs100 crore and 127 kilos of gold was seized from the Chief Secretary M. Ram Mohan Rao’s house. Does she want that corrupt officials should not be touched?

After the demonetization drive, Banerjee is continuously showing her anger and giving statements. Modi rightly observed that he was surprised that opposition leaders were trying to shield the corrupt. Mamta says she is for corrupt to be punished. So why is she upset at the raid at Rao’s House? Any special reason? ‘Chai wala’ before election has become ‘Paytm wala’; Mamta Banerjee taunts. But in a tweet one said Earlier Kali connected West Bengal and Tamil Nadu, now Shardha connects the two. Samajh Gaye!