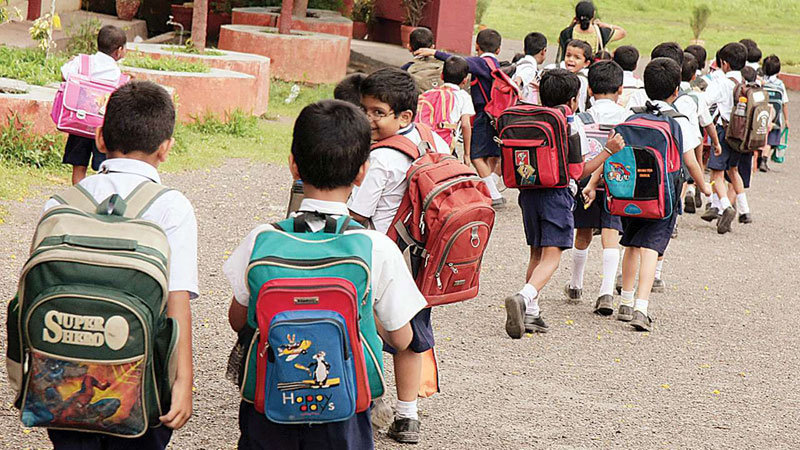 In a written reply in the last session of the Lok Sabha, the Union Education Minister Dharmendra Pradhan has explained how “the National Education Policy (NEP), 2020, provides to include in the school curriculum ethical reasoning, traditional Indian values and all basic human and Constitutional values (such as seva, ahimsa, swachchhata, satya, nishkam karma, shanti, sacrifice, tolerance, diversity, pluralism, righteous conduct, gender sensitivity, respect for elders, respect for all people and their inherent capabilities regardless of background, etc.)

“The NEP 2020 also provides that all curriculum and pedagogy, from the foundational stage onwards, will be redesigned to be strongly rooted in the Indian and local context and ethos in terms of culture, traditions, heritage, customs, language, philosophy, geography, ancient and contemporary knowledge, societal and scientific needs, indigenous and traditional ways of learning etc. – in order to ensure that education is maximally relatable, relevant, interesting, and effective for our students. ”

One was not supposed to be an astrologer to say that the minister’s remark would be portrayed as the Modi government’s systematic attempts at “saffronisation of education”. If experience in recent years is any indication, talking of Indian values and its traditional knowledge is a taboo in our intellectual circles, overwhelmingly dominated, as these generally are, by the so-called liberals/seculars. Their invariable argument is that the values of a country are determined by its majority community and hence prejudicial to the interests of its minorities.

Those against value-education argue that teachers of values do not teach; they “moralise”, “preach”, “indoctrinate”, “manipulate”, and so forth. These teachers are also said to be “rigid”, as a result of which “the idea of free inquiry, thoughtfulness and reason” seems to be lost on a student; “he or she is thus unable to examine and weigh his or her own values.”

Incidentally, similar arguments were made by the intellectual elites of United States during 1960s, 1970s and 1980s. But ideas changed when during these three decades the US saw a 560 percent increase in violent crimes, a cent increase in illegitimate births, and a quadrupling in divorce rates, not to speak of the rising teen-pregnancies and incidents of AIDS. Compared to other developed countries, the US had the highest divorce rate and the highest percentage of violent deaths among the youth.

Against this background, the results of the 1994 Gallup Poll of the public’s attitude towards value education in America were instructive. A majority of the residents talked of the importance of teaching values and ethical behaviour in schools. More than 90 percent of those surveyed favoured the teaching of “core values”. Two-thirds of the subjects also favoured non-devotional instruction about world religions.

“Core values” have been defined as values that are universally accepted by all religions. These include compassion, courage, courtesy, fairness, honesty, kindness, loyalty, perseverance, respect and responsibility. It is in this sense that more and more Americans are now talking of the importance of learning the fundamentals of all religions so that they can promote the legitimacy of the values and character traits that they are emphasising to the students.

In fact, some are even arguing that although rooted in world religions, core values are essentially secular values, which come from man rather than from God. Learning them goes a big way in building one’s character, not otherwise as our so called secularists in India apprehend.

As a matter of fact, what we see in India today is that the Muslim children learn about Islam and the Quran in madrasas and the Christian children learn the essence of Christianity and the Bible in educational institutions founded and managed by them. Under the Indian Constitution, the minorities are allowed to have their own educational institutions, and certificates or degrees thereof are recognised legally.

In contrast, the children of a majority of the Hindu community do not have such facilities. Whenever there are attempts to teach them about the Ramayana, the Mahabharata or the Gita in normal schools, the secular brigade makes a lot of hue and cry.

Take also the case of former Supreme Court Justice Anil R Dave’s suggestion sometime ago. He had made a point why the Gita and the Mahabharata should be taught to school children.

“Our old tradition, such as guru-shishya parampara (teacher-student tradition) is lost; if it had been there, we would not have had all these problems in our country,” the learned Justice had said, referring to the growing problems of violence and terrorism.

“Now we see terrorism in countries. Most of the countries are democratic. If everybody in a democratic country is good, then they would naturally elect somebody who is very good. And that person will never think of damaging anybody else,” he had said.

Predictably, the secular brigade got wild over Justice Dave’s “Hindutva remarks”. Now the question is: where will the children of the Hindus — who constitute an overwhelming majority in India — learn from the Indian classics, if not in schools?

Secondly, is it correct to see the classics or epics of a country through religious prisms? In fact, in January 2012, the Madhya Pradesh High Court had dismissed a petition challenging introduction of ‘Gita Sar’ (essence of Gita) in the school curriculum. When the Catholic Bishop’s Council filed a PIL in August 2011, the court gave the petitioner’s counsel two months to read the holy book in its entirety and make up his mind. The court finally held that the Bhagavad-Gita was essentially Indian philosophy and not a religion.

Of course, a case can be made that in our educational institutions, essence or fundamental values of all religions should be taught. But the more germane point is that our so-called secularists should realise that reading religions is not being communal or promoting communalism.

In fact, the core values of every religion are similar. Learning them goes a big way in building one’s character and the country’s overall value system.

Notably, there are many scholarly works that prove that a nation’s rise or fall is determined by its value system. It is argued that former world leaders such as Egypt, Iran, Spain, Portugal and Great Britain declined as much for their economic failures as for their failures in human and spiritual aspects.

Even India under the great Mughals, as Paul Kennedy has explained in his classic – “The Rise and Fall of Great Powers”, had to fall because of the then prevailing “retarding factors in Indian life” — a Muslim elite whose conspicuous consumption (servants and hangers-on, extravagant clothes and jewels, harems and menageries) amidst the ocean of penury; and the sheer rigidity of the Hindu taboos such as the oppressive caste system which throttled initiative and instilled rituals of not killing even rodents and insects, leading not only to the loss of vast amounts of food but also the bubonic plagues.

In this ‘Information Age’, the values of truthfulness, honesty, integrity, humility, justice, steadfastness and dependability continue to be as relevant as ever. It is important for the educators to define expected skills for being successful in family work, social and other environments, and to include those aspects of character and moral development that are deemed important.

Gone are the days of the rivalry between the advocates of ‘Asian value system’ (responsibility towards the family, state and society) and the ‘Western value system’ (individualistic culture and modernity). Now is the time of synergy between the two, something countries like Japan, South Korea, Singapore, Taiwan and Hong Kong have achieved with great success. In a sense, these Asian countries have accepted the “secular” culture of the west — capitalism, liberalism and democracy—to a considerable extent.

The moral of the story is thus clear. It is time to re-examine the unnecessary politicisation of the question of value education through the fundamentals of all religions, including Hinduism, in India.