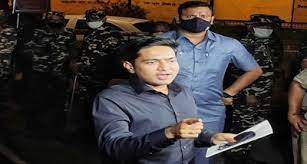 Enforcement Directorate has questioned Trinamool Congress MP Abhishek Banerjee in a money laundering case linked to an alleged coal pilferage scam. Abhishek appeared before the the probe agency in New Delhi yesterday. His wife, too, was called by the agency but citing the Covid-19 pandemic, she requested the agency to question her at her residence in Kolkata.

The probe led by the ED is based on an FIR registered by the Central Bureau of Investigation (CBI) over alleged mass coal pilferage in Eastern Coalfields Ltd mines in West Bengal’s Kunustoria and Kajora collieries.