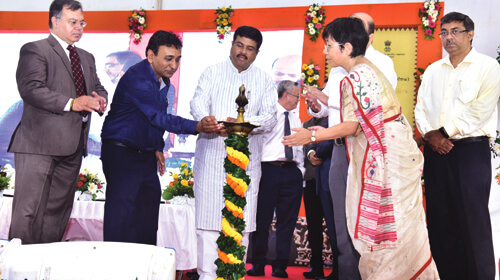 The Union Minister for Petroleum & Natural Gas and Skill Development &Entrepreneurship Dharmendra Pradhan, laid the foundation stone for permanent campus of National Skill Training Institute (NSTI) for Women at Mohali, Punjab. This is the first NSTI Institute for Punjab and only one of its kinds in India which is exclusively for women.  The Minister also launched a unique Pradhan Mantri Kaushal Kendra (PMKK) which would admit differently abled persons as well, also a first of its kind in India at Mohali. The Institute is presently operating out of temporary campus at Rajpura.

Speaking on the occasion,  Dharmendra Pradhan said that NSTI for women and PMKK for differently abled in Mohali are being launched under “Skill India” initiative of the Government of India under the leadership of Prime Minister, Narendra Modi.   The Minister said that Punjab is naturally gifted in skills of various kind in and is a leader in a many fields in the country.  The challenge is to match the skills with the needs of the time and latest techno-economic necessities.  He said that NSTI at Mohali would go a long way in setting the skill standards in the country and create appropriate skilled youth suitable for employment.