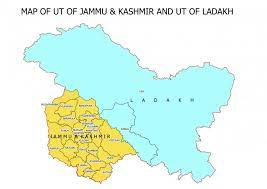 The Delimitation Commission, under Justice (Retd) Ranjana Prakash Desai is visiting Jammu & Kashmir from July 06 and will interact with the District Election Officers (DEOs)/Deputy Commissioners and Political Parties of the Union Territory at four venues including Pahalgam in South Kashmir.

The exercise will be carried out by the commission to gather first-hand information and input concerning the ongoing process of delimitation as mandated under Jammu and Kashmir Reorganisation Act, 2019. During their four-day tour of the UT, the Delimitation Commission has desired to interact with District Election Officers of Anantnag, Kulgam, Pulwama and Shopian districts at Pahalgam Club, Pahalgam on July 7.

However, the Joint Chief Electoral Officer of J&K, Anil Salgotra, has directed all the District Election Officers to attend the meetings with all data, PPT and reference material related to the subject, as per schedule.

It is worth to mention, the Delimitation Commission was constituted in March last year and its term was extended by another year in March 2021 due to the ongoing pandemic.
Tasked with drawing out constituencies for the polls, in a first, the commission will also carve constituencies for scheduled castes and scheduled tribes for the first time in the erstwhile state of Jammu and Kashmir.