This has been made possible by the trend of recoveries exceeding new cases and low number of fatalities per day which have ensured a total net reduction of the Active Caseload. India’s present active caseload consists of just 3.66% of India’s Total Positive Cases. The new recoveries of 33,494 in the last 24 hours have led to a net decline of 3,930 in the Total Active cases. The rolling average for the past week shows the sustained decline in the daily cases for the six most affected States. The daily new recoveries recorded in the country have been more than the daily cases registered since the last 15 days. The number of daily new cases in the last 24 hours is 30,006. While, 33,494 cases recovered and discharged during the same duration. 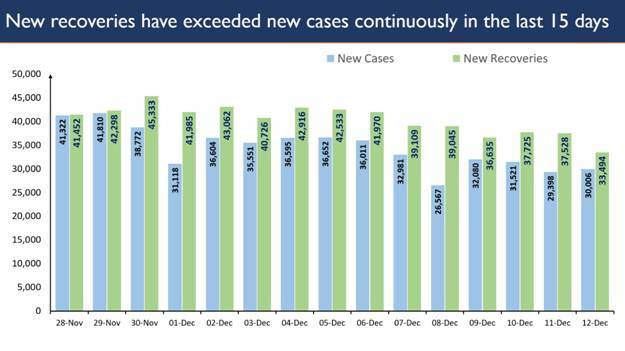 The rising recoveries have also improved the Recovery Rate to 94.89% today.

The total recovered cases stand at 93,24,328. The gap between Recovered Cases and Active Cases is increasingand presently stands at 89,64,509.

74.46% of the new recovered cases are observed to be concentrated in 10 States/UTs.

Kerala has reported the maximum number of single day recoveries with 4,748 newly recovered cases. 2,873 people recovered in West Bengal followed by 2,774 in Maharashtra. 442 case fatalities have been reported in the past 24 hours.