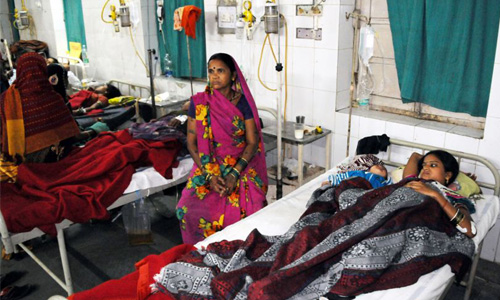 The death of 17 young women after a botched sterilisation procedure at a state-run camp in Chhattisgarh’s Bilaspur district is a grim reminder of the state of the healthcare affairs. It is indeed unfortunate that such incidents are happening in a state whose Chief Minister himself is a doctor. This is not the first time that sorry face of the healthcare system in the state has been exposed. In 2011, four persons had died and 30 lost their eyesight permanently after an eye camp in Balod. The next year, 15 people lost their eyesight in Bagbahra of Mahasamund district. This was repeated in Kawardha, then in Rajnandgaon then in Durg, then in Dhamtari. Over 70 people have lost eyesights in different eye camps organised by the state health department in the last three years.

In 2012, Chhattisgarh’s infamous ‘uterus scam’ broke out. In a series of private nursing homes across the state hysterectomies were performed on unsuspecting rural women to claim money from the health insurance scheme. Even the National Human Rights Commission had taken sou motu cognizance of some of these camps and ordered that the state government pay or enhance compensation to the affected people. Every time such incidents happen, committees are formed but no one is held responsible. The doctor, R.K Gupta, had been accused of operating on more than 83 women in just a few hours with the help of two assistants in an abandoned private hospital, contravening government guidelines to limit such operations to 30 a day. The doctor conducted 83 operations with one instrument in five hours—less than four minutes per operation. Dr Gupta is considered an expert in such cases, and was awarded by Chief Minister Raman Singh on January 26 this year for conducting 50,000 laparoscopic tubectomies.

The cause of the deaths was not immediately clear; the victims showed signs of toxic shock, possibly because of dirty surgical equipment or contaminated medicines. Preliminary reports also show that the medicines administered were spurious and also the equipment used was rusted. India’s family planning programmes rely on targets, bribes and coercion. In many parts of the country, authorities aggressively pursue sterilisation targets, especially for female sterilisation, by threatening health workers with salary cuts or dismissals. As a result, some health workers pressure women to undergo sterilisation without providing sufficient information, either about possible complications, its irreversibility, or safer sex practices after the procedure. In fact in this incident too, the health workers were given an incentive of Rs 200 each and the victims were promised Rs 1400 for undergoing the operation.. Chhattisgarh is another state which is affected by the countrywide racket that has now come to be known as the Munna Bhai admission racket. The government has yet to weed out bogus students who have got into the medical education system in the state. They may take over the reins soon. Healthcare in the state is a sham. There is a severe scarcity of qualified doctors in the state-run hospitals. This incident too points out the negligence of the doctors, which the state government was quick to point fingers to; but there are serious doubts about the quality of the medicines and equipment that are being used in the state-run hospitals. There should be a thorough probe into the politician-official- supplier- nursing home nexus in the state.

Healthcare, even basic, has always eluded people in the interiors of Chhattisgarh. The Maoist-led rebellion has only complicated matters. Deaths due to malaria and fever are still common, accounting for, by some estimates, 6 per cent of disease-related fatalities. Accidental and trauma deaths are next on the list (5 per cent), followed by diarrhea, jaundice and TB (2 per cent each). With almost 17 per cent of the 39,000 reported rural deaths (the actual figure being almost three times, as per Annual Health Survey data) due to reasons requiring medical intervention. The state health minister should have tendered his resignation immediately. In fact, the Chief Minister himself should took the responsibility, which comes after earlier incidents of medical negligence and corruption in the state. The incident is an embarrassment for Prime Minister Narendra Modi, who has vowed to reform India’s health system. In 1979, China’s total fertility rate was 2.8, while Kerala’s was 3. By 2007, 28 years after it forced a coercive one-child policy on its people, China’s fertility rate stood at 1.7. Kerala reached the same figure but without treating its people like laboratory rats. Its success stands on the three ‘E’ pillars: Education, Employment and Equality. On the ground, Kerala’s three E’s translate into a high literacy rate, regular income for families and more confident women. But the rest of India, particularly the north, has not learned anything from Kerala. The latest UN projections say India will have two billion people by 2101 if the population continues to grow at the current rate. India’s population control measures, it seems, are a failure. Experts have blamed the emphasis on sterilisation, which was started in the late 1960s, Population growth can’t be controlled by coercive measures, but with economic growth, education for all and empowerment of women. Everyone is happy to jump on the population control and family planning bandwagon. But few of us will acknowledge the bodies that are butchered in its name. Will Bilaspur rip those blinders off? Let’s hope so.