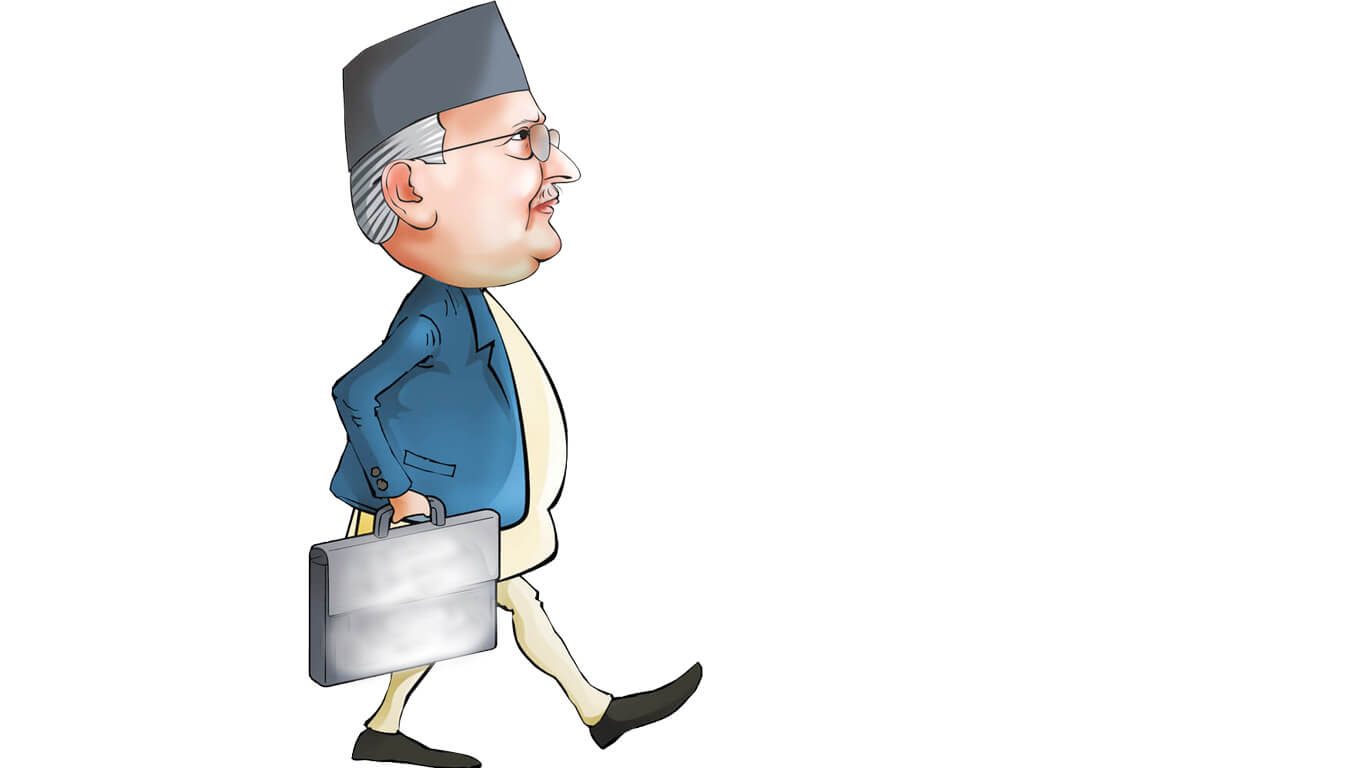 The recent turn in India-China relations and events in Nepal surprised many but not those who know that China plans 50 years ahead and kept track of developments – joining the dots as they emerged. In fact, Nepal should be a case study how China plans. Mao Zhedong had famously said, “Tibet is the palm of China and Ladakh, Nepal, Sikkim, Bhutan and NEFA (read Arunachal Pradesh) are its fingers.” In a recent media interview Lobsang Sangay, President of Tibetan government-in-exile recently warned Nepal that after occupying Tibet, China is looking to accomplish its ‘Five-fingers plan’, adding “China is driving a wedge between centuries-old Indo-Nepal relations to quietly colonise the Himalayan country.” China has already soaked Nepal communists in red dye. How did China achieve this?

With Nepal priding itself the only Hindu Kingdom in the world, China knew conquering this finger wouldn’t be easy. Mao found the answer in a communist revolution. An article in Debka files of 2002 reads, “The Maoist insurgency in Nepal may be one of the last surviving operations of a little known Chinese intelligence organ known as the Ministry of Foreign Liaison, a body of CCP set up in Mao Tse Tung’s time. This ministry recruited and supported mostly Third World extremist Maoist groups, such as in Nepal … Burma …. Philippines …Cambodia, Japanese Red Army, and … in Peru.  Not all those revolutionary movements survived.  One that did is the Nepalese Maoist Communist Party of Nepal. Chinese intelligence infiltration operations into Nepal, that began decades ago, set off a self-perpetuating Maoist “People’s War” that has never really ended.  It would be in China’s interests to install a regime in Kathmandu that is not too friendly with the US or India.”

Mao was China’s President from September 1954 to April 1959. His Ministry of Foreign Liaison must have set its sights on Nepal in early 1955 – some 65 years ago. The bloody Maoists insurgency (also termed Civil War) was launched by the Communist Party of Nepal (Maoists) against the Nepalese Government on February 13, 1996 with the stated purpose of overthrowing Nepal’s monarchy and establishing a Peoples Republic. It ended with the Comprehensive Peace Accord on November 21, 2006. Notably, Pushpa Kamal Dahal (alias Prachanda) wanted the armed rebellion to be launched in 1991 but lacked consensus. The insurgency resulted in deaths of over 17,000 and internal displacement of hundreds of thousands; characterized by massacres, purges, summary executions, kidnappings and worst of crimes against humanity – on same lines what Mao had perpetrated in China. On June 1, 2001, King Birendra of Nepal and most of the royal family were massacred. Crown Prince Dipendra was accused of the killings. He ‘supposedly’ died on June 4, 2001.

China actively cultivated two Nepalese Maoist leaders of the civil war – KP Sharma Oli (present Prime Minister of Nepal) and Prachanda. Both have flourished under Beijing’s tutelage and are indebted to China. Oli was first arrested in 1970 for subversive politics and later imprisoned for 14 consecutive years (1973-1987). He has served as Prime Minister from October 11, 2015 to August 3, 2016. Prachanda was part Communist Party of Nepal (Maoist) during the Maoist insurgency. Now from Nepal Communist Party (NCP), he has been Prime Minister twice – 2008-2009 and 2016-2017. In between his two premierships, Prachanda had told Nepalese media, “The ultimate war will be with the Indian Army”. Visiting China when not Prime Minister, he was still accorded welcome as ‘Head of State’ in Beijing. In February 2018, Oli vowed to stop Nepalese from joining Indian Army. It is evident both Oli and Prachanda parrot what Beijing wants.

India and Nepal have historical cultural relations. Some six hundred thousand Indians are in Nepal presently and more than seven million Nepalese are in India, serving in Indian Army, police, private sector or otherwise residing in India.  India pays US$12 billion annually to Nepal-origin pensioners from Indian Army (80,000), Assam Rifles (17,000) and 11,000 widows of soldiers. Total bilateral trade in 2018-19 reached INR 57,858 crore (US$ 8.27 Bn). Both countries have a Power Exchange Agreement since 1971 for meeting power requirements in border areas. Some 150 Indian ventures operating in Nepal are engaged in manufacturing, services (banking, insurance, dry port, education and telecom), power sector and tourism industries. Total economic assistance earmarked under ‘Aid to Nepal’ budget in FY 2019-20 was INR 1200 crore.

China began constructing the 770 kms railway connecting Lhasa with Nepal’s border town of Khasa in 2007. A Nepalese military delegation visiting India in 2013 sought assistance to establish a Think Tank in Kathmandu was only promised technical assistance, no funds. Very next year China’s Confucius Institute in Kathmandu University co-established by Hebei University of Economics and Business, with full support from Office of Chinese Language Council International. Post the two-month blockade of India-Nepal border in 2015, Oli signed Trade and Transit Treaty with China in 2016 during his first premiership, giving Nepal access to seven Chinese seaports and dry ports. The blockade was an economic-humanitarian crisis – Indians in Nepal witnessed four km long lines for fuel, non-availability of medicines and severe food shortages. Nepal was pushed closer to China for which it accused India. Nepalese financial system was also affected by sudden Indian demonetization. 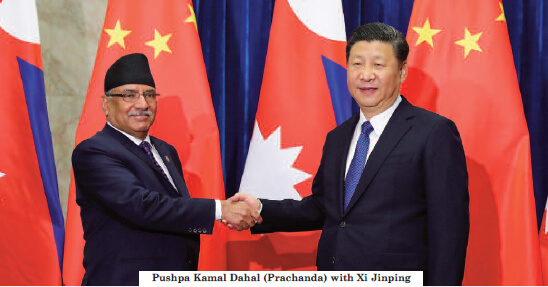 China has gripped Nepal with hard and soft power. PLA soldiers in uniform were observed in northern Nepal in areas bordering Tibet known to have uranium deposits as early as 2014. China deployed PLA in these areas to grab uranium exploration and block Tibetan refugees. Such PLA deployment also catered for nibbling Nepalese territory which is happening already but in connivance Nepalese communists. Nepal cannot stand up to Nepal anyway I bigger nations don’t. About 500-600 Nepalese army personnel are presently  under training in China. China provides scholarships to scores of Nepalese students, as also sponsors study tours for hundreds of Nepali civil servants, security personnel, politicians, civil society members, and journalists annually. Large number of Chinese tourists visit Nepal every year – 1,50,00 visited in 2018. Mandarin is now mandatory in Nepal’s schools with the teachers coming from China who will imbibe anti-India sentiments in upcoming generations.

China has become major player in Nepali politics and the economy especially after it managed to combine the two major communist parties in Nepal and bring them to power. In May 2020 there were signs of split between Oli and Pracahnda but Beijing managed to broker truce between the two. Events moved rapidly after this China’s behest; new Nepalese map claiming three Indian territories, Nepal deploying armed police on its border with India, firing on Indian nationals inside Nepal, Nepalese army chief visiting the border with Pithoragarh (India) to establish border posts, anti-India broadcasts by Nepal Radio, move to amend Constitution of Nepal to curb Madhesis citizenship rights and the like.

Unconfirmed reports indicate Oli government has agreed in principle to allow China deploying 3000 PLA personnel in Kalapani area under garb of Nepalese army. China’s ultimate aim would be to establishing itself along  India-Nepal border in conjunction the Nepalese army assisted by Pakistan’s ISI to threaten India’s northeast. It was on Chinese behest that erstwhile Pakistani Prime Minister visited Nepal and presently Imran Khan is jumping with joy to support Oli. ISI has been operating from Nepal against India for long and has intensified activities in wake of the India-China standoff. The security establishment has noticed increase in presence of ISI-backed groups along India-Nepal borders. Few years back, four Chinese nationals were caught coming across with fake Indian documents on a mission to meet Naga rebel groups. On July1, 2020 two Chinese of Tibetan-origin were caught coming via Nepal; one a special agent of People’s Armed Police integral to PLA and the other with links to Indians in Sikkim and Arunachal Pradesh. The implications are clear with many that can come through the porous borders.

Our policy makers are sanguine about India-Nepal military-to-military relations as also our cultural relations. But it is the government that matters; military and public have little say – same as in Sri Lanka. Immediate attention is needed to the India-Nepal border. As for the current Oli-Prachanda rift, apparently latter feels left out of the limelight. China will try its best to broker peace between the two, possibly through top-level power sharing deal like in Israel and Afghanistan. If the Oli government stays as part of power sharing or by itself, we may witness a China-Nepal Extradition Treaty for Tibetans.  China would want this immediately as a sequel to America’s bill to recognize Tibet.

We must acknowledge that communists of Nepal have sold their country to China even if not yet completely. Any government in Nepal will need support of communist parties. If our foreign policy, national security advisors and  R&AW find themselves stumped with the rapid turn of events, fault is ours. We need to face realities and plan accordingly on long-term basis like China.