Consensus must to remove gender disparity under Article 35A 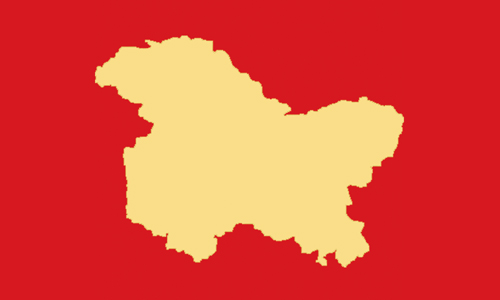 Abrogation of Article 370 of the Indian Constitution, providing a special status to Jammu and Kashmir, has been the core agenda of Bharatiya Janata Party and its erstwhile ‘avtar’ the Bharatiya Jan Sangh which their leaders felt was necessary for “total amalgamation” of Jammu and Kashmir with the Indian Union. The obvious reference was to special privileges that this provision accords to the state and its citizens, such as a separate Constitution and flag and that any law passed by the Parliament necessitating ratification of the state Assembly. However, the other privileges like separate nomenclature, chief minister to be called Prime Minister and Governor as Sadar-i-Riyasat (President), have since been done away with through amendments.

The argument forwarded in support of contention that total abrogation of Article would lead to bringing Jammu and Kashmir, in absolute terms, in the national mainstream is not wholly true. Till today many provisions of the Article 370 have already been amended or removed for cementing relations between the state and rest of the country. There certainly is a strong case for a review of more such provisions and the dire need to look afresh into Article 35A of the Indian Constitution that empowers the state legislature to define “permanent resident” of the state and provide special privileges to them. This Article was added to the Constitution through a Presidential Order known as, The Constitution (Application to Jammu and Kashmir) Order, 1954, which was issued by the President of India, “in exercise of the powers conferred by Clause (1) of Article 370 of the Constitution, with the concurrence of the Jammu and Kashmir government. 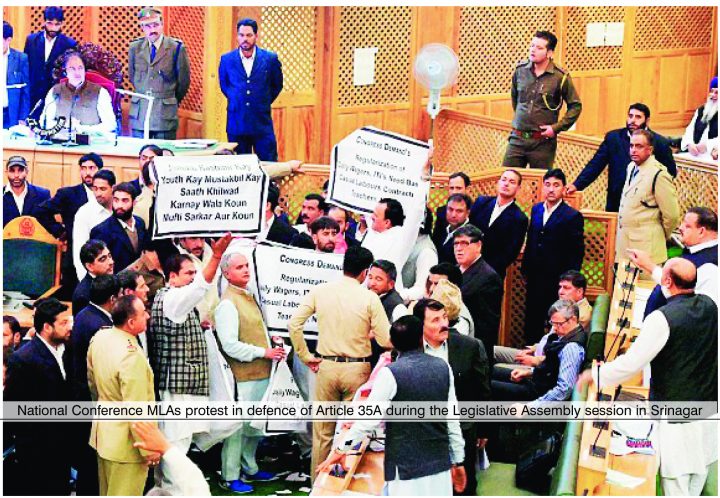 The Constitution (Application to Jammu and Kashmir) Order, 1954 was issued by the then President Dr Rajendra Prasad under Article 370, with the advice of the Government headed by Pandit Jawaharlal Nehru. It was a subsequent to the ‘1952 Delhi agreement’, reached between him and the then Prime Minister of Jammu and Kashmir Sheikh Mohammed Abdullah, which dealt with the extension of Indian citizenship to the Jammu and Kashmir “state subjects”.

The Article 35A was incorporated on the plea “to saving of laws with respect to permanent residents and their rights. — Notwithstanding anything contained in this Constitution, no existing law in force in the State of Jammu and Kashmir, and no law hereafter enacted by the Legislature of the State:

(a) defining the classes of persons who are, or shall be, permanent residents of the State of Jammu and Kashmir; or

(i) employment under the State Government;

(ii) acquisition of immovable property in the State;

(iii) settlement in the State; or

(iv) right to scholarships and such other forms of aid as the State Government may provide, shall be void on the ground that it is inconsistent with or takes away or abridges any rights conferred on the other citizens of India by any provision of this part.” 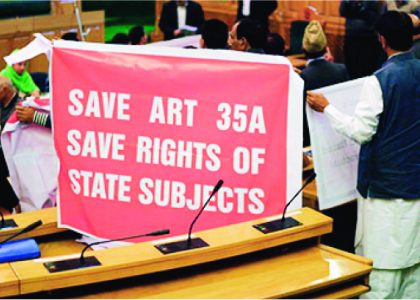 The most obnoxious aspect of the Article 35A or the manner in which it has been defined or “misinterpreted” by powers that be from time to time is the discrimination that has been meted out to girl/women permanent state subject holders, vis-a-vis the male counterparts. Under the rules the Permanent Residents Certificate (PRC) issued to girls was stamped as “valid till marriage”. An express connotation of this stamping was that the PRC holder, if married to a non-state subject, would lose the right to be a bona fide resident of the state and ones who get married to men holding state subjects, would have to apply for a fresh PRC in order to get that stamp erased. This is not so if a man married a non-state subject woman which many experts describe as a violation of the fundamental rights.

Who is a Permanent Resident of J&K 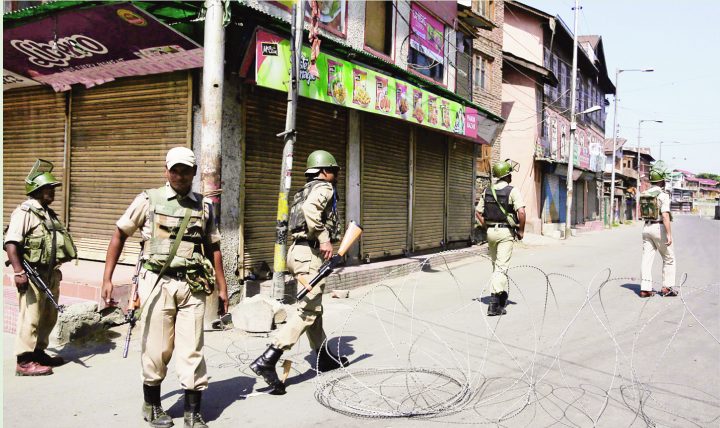 The J&K constitution, which was adopted on November 17, 1956, defined a Permanent Resident (PR) of the state as a person who was a state subject on May 14, 1954, or who has been a resident of the state for 10 years, and has “lawfully acquired immovable property in the state.

What is Article 370 of the Indian Constitution

This is an article that grants special autonomous status to Jammu and Kashmir. The article is drafted in Part XXI of the Constitution: Temporary, Transitional and Special Provisions: The state’s constituent assembly was empowered to recommend the articles of the Indian constitution to be applied to the state or to abrogate the Article 370 altogether. After the state Constituent Assembly has dissolved itself without recommending abrogation, the Article 370 was deemed to have become a permanent feature of the Indian Constitution.

the scheme of powers and dispersed, no further extension of powers was possible. 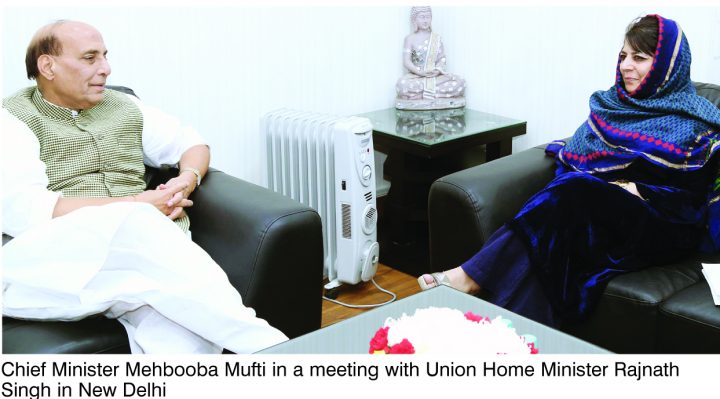 The Presidential order of 1954, officially The Constitution (Application to Jammu and Kashmir) Order, 1954 came into force on 14 May 1954. Issued with the agreement of the State’s Constituent Assembly, it was a comprehensive order seeking to implement the 1952 Delhi Agreement. Arguably, it went further than the Delhi Agreement in some respects.

The provisions implementing the Delhi Agreement were:

In addition, the following provisions which were not previously decided in the Delhi Agreement were also implemented:

In addition to these original orders, forty seven Presidential orders have been issued between 11 February 1956 and 19 February 1994, making various other provisions of the Constitution of India applicable to Jammu and Kashmir. All these orders were issued with the ‘concurrence of the Government of the State’ without any Constituent Assembly. The effect of these orders has been to extend 94 of the 97 subjects in the Union List (the powers of the Central Government) to the State of Jammu and Kashmir, and 260 of the 395 Articles of the Constitution of India. All these orders have been issued as amendments to the Presidential Order of 1954, rather than as replacements to it, presumably because their constitutionality was in doubt.[

Many, particularly in Kashmir, have described this process as the ‘erosion’ of the Article 370.

Intriguingly, this repugnant interpretation of the PRC Act has happened despite there being no such provision in either in the original 1927 order of the then ruler of the state Maharaja Hari Singh, notification1-L/84 dated April 20, 1927, or the subsequent Constitutional provisions in the post-1947 era that on marriage with a non permanent resident, the daughter of a permanent resident shall lose her status as permanent resident of the state and correspondingly her inheritance rights. As such no law exists that treats males and females differently. The only distinction that relevant laws make, in the context of Jammu and Kashmir, is that between Permanent Resident Certificate holders, living in the state or outside, and non- PRC holders and not between male and female permanent residents of the state.

The issue regarding discriminatory implementation of Article 35A of the Constitution has been challenged in the court from time to time. Given the political sensitivity attached to Article 370 and its related provisions, the cases moved on a snail’s pace. There is a long and arduous history behind some women moving the higher judiciary for justice and the success they got was in limited terms as their rights to full citizenship of the state, after marriage, were not fully restored. The High Court of Jammu and Kashmir confined it to addressing the issue of permanent resident rights of women married to non-residents of J&K and refrained from looking into the similar rights of their children. 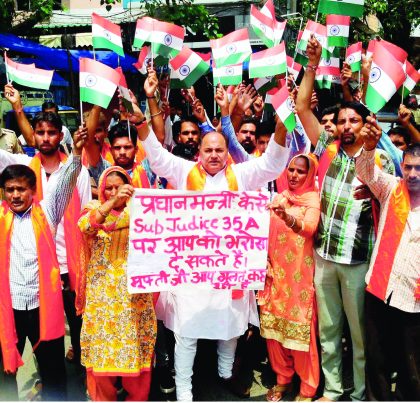 In fact the J&K High Court had on four occasions delivered judgements that were aimed at removing discriminatory provisions against women. This is another matter that these judgements, at least in the case of Ms Tsering Angmo, from Ladakh, Dr Rubina Malhotra and Ms Amrinder Kaur, both from Kashmir, took over two decades to be delivered. The court directions were unambiguous but felt short of addressing the entire gamut of issues involving inheritance rights.

The cases of these women, as that of many more who agitating for their rights, makes an interesting reading. Ms Angmo, married to a non-state subject from UP, fought for her right to build a house in the land of her birth wehre Dr Rubina Malhotra, MBBS at that time, fought for right to get a MD seat in state medical colleges, which she was denied on the grounds that he had married a non resident of the state. Ms Amrinder Kaur, also married to a non state subject, took the matter to the court after her relatives tried to usurp her ancestral property.

Despite the High unambiguous order of the High Court, it was a case of easier said than done for the petitioners. The state government at one point of time issued a counter order to the Court’s direction on issuance of state subject in respect to stamping the document as “valid till marriage”. However, it was after a number of contempt petitions subsequently filed that the government implemented the court order in this regard.

The issue of Article 35A again got into limelight when recently a Kashmiri origin woman Ms Charu Wali Khan challenged its legality in Supreme Court. She has settled outside J&K state and married to a non-J&K resident. In her petition she claimed that this law takes away her succession rights and also disenfranchises her. The Apex Court has sent notices to both the Centre and the state governments.

The issue of Article 370 and more so, that of Article 35A have since the day of inception assumed a political colouring. Article 35A is an extension of the erstwhile Maharaja’s order. But in the change political scenario after its adoption by the democratically elected Centre and the state governments, it began to be viewed on religion and regional lines. It was only after some women moved the courts to seek justice on the gender discrimination issues that its other facets came to limelight.

Where do we go from here? The present BJP-led NDA Government started in the right earnest manner when on coming to power it talked about a wider debate on every available forum regarding utility of Article 370 and will its abrogation be more beneficial to the people of state than its continuation. The Government has completed three years in office but this debate has not begun barring the issue having been tossed every now and then as part of the political agenda both of the ruling dispensation at the Centre and the opposition parties both at the national and the state levels. 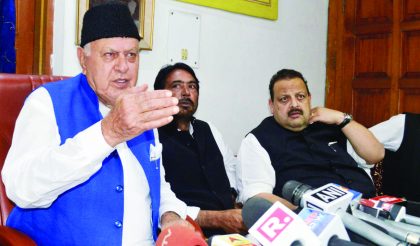 One may or may not like it the issue has got mired in political controversy and has acquired an emotional overtone. The emotions vary from region to region in the state. The abrogation should be preceded by a meaningful debate that involves all the stakeholders. At least for a beginning efforts should be made to develop a consensus on removing its provisions that relate to deciding heritance rights issues of women.

The matter is before the Apex Court. But it is more desirable that a solution is found out at the political and social levels which would not only be more acceptable but easy to implement.