Churches Go On Sale In Europe 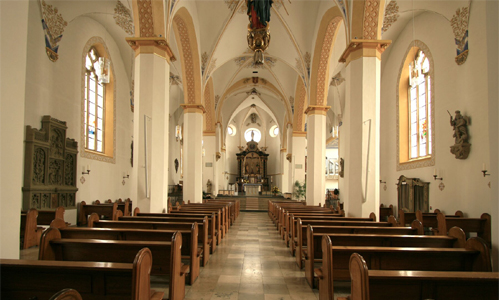 The Roman Catholic Church in Germany has shut about 515 churches in the past decade. But it is in the Netherlands where the trend appears to be most advanced. The country’s Roman Catholic leaders estimate that two-thirds of their 1,600 churches will be out of commission in a decade

Christianity in the Western countries is in a sheer decline, particularly in Europe, where church audience levels has fallen very low. In most countries, the tendency is the same, even if less dramatic. The truth is that modern people just aren’t very fascinated anymore in practicing Christianity. A large number of churches in European countries stand deserted. Many churches have been made into buildings for non-religious use. Many others have been sold to non-Christians who have changed them into their own places of worship.

Why has it happened? “The point simply is,” observes Koenraad Elst, writer and Inadologist, “that European Christians of many generations, have outgrown Christianity. Most people who left the church have found that they are not missing anything, and that beliefs which provided a framework for interpreting and shaping life, were but a bizarre and unnecessary construction after all. They know that Jesus was not God’s Only-begotten Son, that he did not save humanity from eternal sin, and that our happiness in this world or the next does not depend on believing these or any other dogmas.”

Wall Street Journal, a leading financial newspaper of US, recently published an article, Europe’s Empty Churches Go on Sale. According to it, “The rapid weakening of the faith in Europe is reflecting in closing of Europe’s churches. Europe-wide numbers of closed churches are scarce, but figures from individual countries are telling. The Church of England closes about 20 churches a year. Roughly 200 Danish churches have been deemed nonviable or underused. The Roman Catholic Church in Germany has shut about 515 churches in the past decade. But it is in the Netherlands where the trend appears to be most advanced. The country’s Roman Catholic leaders estimate that two-thirds of their 1,600 churches will be out of commission in a decade, and 700 of Holland’s Protestant churches are expected to close within four years.”

The Dutch province of Friesland—where 250 of 720 existing churches have been closed—constituted a team to find solutions. But solutions are difficult to find as churches are empty. Today this much percentage of people at once a week goes to church: Ireland 48 per cent, Italy 39 per cent, Netherland 30 per cent, Spain 25 per cent, UK 22 per cent, Germany 12, Denmark 5 per cent. Such a low attendance make very difficult to sustain churches. Trends for other religions in Europe illustrate, while Christianity in a steep decline, other religion are still flourishing. Orthodox Judaism, which is predominant in Europe, has held relatively steady. Muslims in Europe are increasingly converting empty Christian churches into mosques. The proliferation of mosques housed in former churches reflects the rise of Islam as the fastest growing religion in post-Christian Europe. The number of Muslims in Europe grew from about 4.1 per cent of the total European population in 1990 to about 6 per cent in 2010, and it is projected to reach 8 per cent, or 58 million people, by 2030. There are now more practicing Muslims than practicing Christians in many parts of Europe. In Germany, as a whole, more than 400 Roman Catholic churches and more than 100 Protestant churches have been closed since 2000. Another 700 Roman Catholic churches are slated to be closed over the next several years. By contrast, there are now more than 200 mosques (including more than 40 mega-mosques), 2,600 Muslim prayer halls and a countless number of unofficial mosques in Germany. In neighboring France, mosques are being built more often than Roman Catholic churches. The total number of mosques in France has already doubled to more than 2,000 during just the past 10 years, according to a research report.

“Everyone will be confronted with big empty buildings in their neighborhoods. As communities struggle to reinvent their old churches, some solutions are less dignified than others. In Holland, one ex-church has become a supermarket, another is a florist, a third is a bookstore and a fourth is a gym. In Arnhem, a fashionable store called Humanoid occupies a church building dating to 1889, with racks of stylish women’s clothing arrayed under stained-glass windows.” says the WSJ article. Many churches, especially smaller ones, are becoming homes, and that has spawned an entire industry to connect would-be buyers with old churches. The list of churches of England and Scotland are available properties online, with descriptions worthy of a realty firm.

In the U.S., church statisticians say roughly 5,000 new churches were added between 2000 and 2010. But some scholars think future of American churches will not be different from European churches, since the number of actual church goers are declining fast. The United States Census Bureau Records give some startling statistics, backed up by denominational reports and the Assemblies of God U.S. Missions:

Muslims and Mormons have seen strong growth even as the Lutherans, Presbyterians, Methodists and other mainline Protestant denominations have shrunk, according to the Association of Statisticians of American Religious Bodies.

Even more threatening for the endurance of Christianity is the decline in the priestly vocation. Many parishes that used to have two or three parish priests now have none. So that Sunday Service has to be conducted by a visiting priest, who has an ever fuller agenda as his colleagues keep on dying, retiring or abandoning priesthood without being replaced. Church officials said , it is causing the largest realignment of the parish structure in the history of the archdiocese, which stretches from Staten Island to the Catskills. The parish reorganisation is being driven by a shortage of priests, financial troubles and declining weekly church attendance, which hovers at less than 15 per cent of the archdiocese’s Catholics on an average Sunday.

One of the main reasons for the closings of churches is the increased secularisation of those under 40 in both Europe and much of the US. This trend actually began in some areas in the 1960s but seems to be accelerating somewhat and spreading. You can see this with U.S. missions being consolidated and missionaries struggling to find people to teach. During colonial times, Europeans were spreading Christianity across the globe, but now Christianity is becoming more a part of Europe’s historical landscape. Today, Europe is filled with historic cathedrals, but there is no one to fill them.