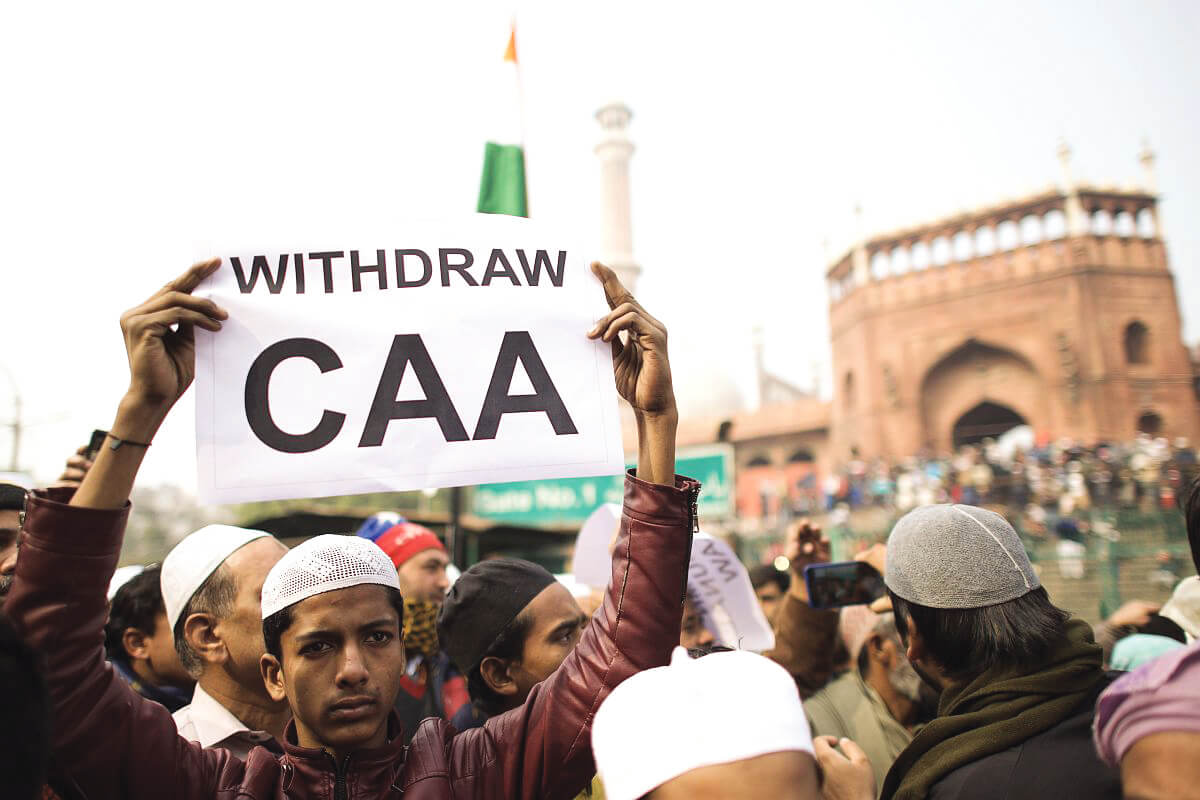 There have been massive protests and violence across the nation after both the houses of Parliament passed the Citizenship Amendment Bill (which became Citizenship Amendment Act after President’s assent), fulfilling BJP’s yet another poll promise. Students of many academic institutions, film celebrities, leftists and academicians have come out in support of the protesters asking the government to withdraw the legislation calling it ‘unconstitutional’. It is very much clear that CAA has divided the public opinion and hence opposition parties are jumping the guns to yield political dividend by securing the ‘Muslim votes’. Anyone seeing the visuals of protests can identify the ‘protesting group by their clothes’, as Prime Minister Modi put forward in a public meeting in Jharkhand. Since the protest movement has acquired communal turn, the larger question is whether these are mere protests against CAA or a well-planned Jihad against the Indian state and the government in particular.

CAA is aimed at providing citizenship to the persecuted minorities of the Islamic Republics of Pakistan, Bangladesh and Afghanistan, who have entered India before 31st December 2014. This list of minorities includes Hindus, Sikhs, Jains, Buddhists, Parsis and Christians. It is a well-established fact that minorities are not safe and are considered second class citizens in the neighbourhood Islamic Republics. There had been many instances of raping, kidnapping and converting of them by Islamist organisations without the civilians getting any protection from their respective states. Therefore, many of these minorities have crossed the borders and are living in India on long-term visas. Not being granted citizenship for years, they couldn’t avail any of the rights that citizens enjoy. They are unable to find jobs, build houses or give proper education to their children. The NDA government is trying to undo the historical error of Partition by brining relief to their lives. Opposition parties, who always pretend to be secular, objected to the omission of ‘Muslims’ from the list. Are Muslims minorities in these three nations? No! They are accused of persecuting the minorities and hence my question is: How can they be given Indian citizenship?

Now the Opposition might ask about Shias, Ahmadiyas and Rohingyas. Does India have any moral obligation towards Shias, Ahmadiyas and Rohingyas? No is the obvious answer. Partition of India was done on the basis of religion and Pakistan was the natural home for Muslims in the subcontinent. The Sunni-Shia conflict being an inter-Islamic problem, India has no reason to interfere in the matters of another country. But the failure of Liaqut-Nehru pact (in which both the countries gave assurances to safeguard their minorities’ rights) morally enables India to press for ensuring constitutional protection to those minorities fleeing the Islamic Republics. Shiites can approach Iran if they fear persecution elsewhere. There are around 50 Islamic nations, whose leaders swear by the Quran. It is their moral responsibility to accommodate ‘stateless Muslims’. Muslims holding Indian citizenship rioting in streets and causing damage to public property for their counterparts from the neighbouring nations is highly condemnable. CAB was clearly written in the election manifesto of BJP and people pledged overwhelming support to the party by giving 303 seats in the Lok Sabha. 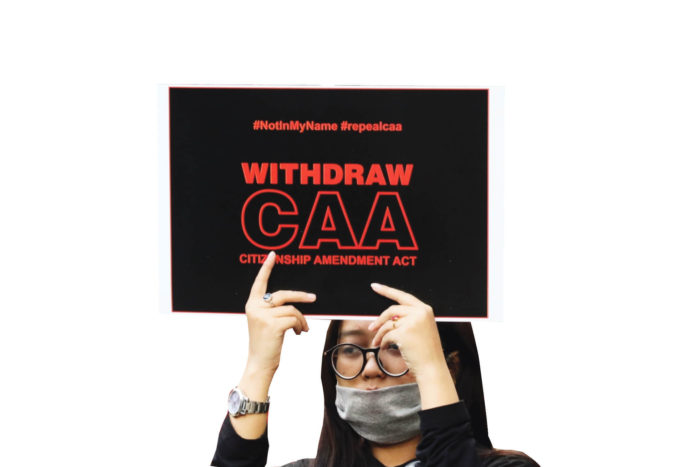 Currently, two versions of the same protests are visible. In the north-eastern states, the demand is for the scrapping of the entire CAB, while in the other parts, the protest is for the inclusion of Muslim community within the purview of CAA. These protests in ‘mainland India’ clearly exhibit Islamic character (Islamist organisation leaders were also arrested in Assam for fake campaigns). From the chanting of ‘Allah-o-Akbar’ to publically exhibiting placards to defame Hinduism everything is out there in public domain. Trains were burnt and railway stations were vandalised in West Bengal, while the state government, responsible for law and order, was inactive in the entire act of controlling the mob. In Delhi, public buses were burnt by protesters and stone pelting happened outside Jamia Millia Islamia University. Violent protests also happened in Aligarh Muslim University, where security forces had to intervene to control the exploding situation. Muslim students of almost all Central Universities along with anti-BJP students’ organisations are still agitating against CAA. What unites a Muslim student from India to Muslims of other nations? Clearly, it is Muslim brotherhoo, which sneaks through revolutionary slogans, posters and sudden love for Indian Constitution. These protests always wear the ‘purdah’ of human rights, which are highly selective. Islamists or extreme leftists in Indian campuses stand in solidarity with Palestine, Rohingyas in Myanmar and Uighur Muslims in China. Have you ever seen any Muslim organisation arguing for the rights of Kashmiri Hindus who were thrown out of their own homeland as a result of ‘Muslim majoritarianism’?

From my own experience as a student of a Central University, I would argue that these movements in campuses are led by Muslim students from Northern Kerala. The radicalisation of Muslim youth in Kerala is a genuine concern, raised by multiple organisations including the Communist Parties and also by intelligence agencies. Most of the Indians, who crossed the sea to join Islamic State, were from the Kerala and even there were voice clips sent by Islamists from Afghanistan speaking in Malayalam asking to kill Hindus and create communal clashes in Kerala. When Parliament passed law to criminalise triple talaq, there were voices of dissent from Jamia accusing the BJP government of interfering in their religious customs. It is ironic that these Islamists are asking for a common law for giving citizenship to refugees, while they oppose any attempt to bring Uniform Civil Code. But what saddens me is the role of certain media houses in glorifying these rioters and stone pelters. In a nation, where a top journalist was heard calling Burhan Wani “the son of a school master” and not as a terrorist, what to expect more?

The violence is getting spread to more parts of the nation. Even counter protests are also happening with people denouncing violence and supporting CAA. Using religion as a curtain for violence shouldn’t be encouraged. Political parties should refrain from allowing the violent mob from commanding the street. There were many eminent persons from Congress and CPI (M), who asked for giving citizenship to Bangladeshi and Pakistani minorities. But now sensing a golden opportunity, they are playing a dangerous card. Also universities cannot be centres for breeding terrorists.

There is also a systematic misinformation campaign against CAA and the proposed NRC. Many of the protesters have no ideas about any of these issues but still they are out on streets to vandalise vehicles.

The whole propaganda machinery of Islamists and leftists are at work, creating a notion that the entire nation is burning and Modi-Shah duo are responsible for the incidents. Mamata Banarjee has gone one step further to ask for a UN-monitored referendum on CAA, maybe she is thinking of replicating the Lok Sabha election model, in which her party men were seen capturing polling boothss and doing fake voting. Even while all debates are carrying on in India about CAA, news emerged that a Hindu girl was abducted in Pakistan. No political fronts from the Opposition ranks showed any concern for the kidnapped gitl, but they were quick in condemning the police action on those, who were attacking the security personnel. What we see now on streets cannot be written off as a spontaneous show of dissent in a healthy democracy. It is nothing but fear-mongering by intelligentsia and unruliness of mobs with a particular religious denomination, challenging Indian Parliament and rule of the land. India’s general public should understand the ground reality and move away from the rhetoric of few elites before these Jihadis replicate Muslim League’s direct action day or the medieval tendency of slaughtering kafirs.