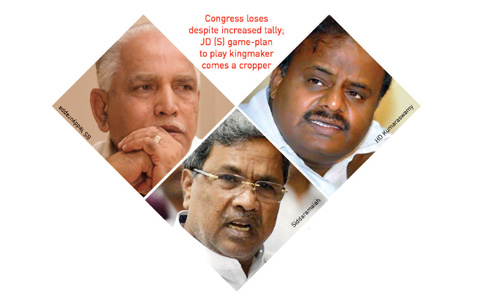 Elections results can really be ironic, contradictory and deceptive also. The BJP has emerged victorious by winning 100 out of the total 198 seats in the Bruhath Bengaluru Mahanagara Palike elections held on April 22, down eleven seats from its previous tally of 111. But, with the ruling Congress party winning 77 seats, 16 seats more than its earlier number of 61, it continues to be seen as having suffered a humiliating defeat. The JD (S) has retained its number of 14.

This difference in the way the victory and the defeat is seen is due to projection of the possible outcome from the party’s present respective standpoint. The Congress was expected to sweep the BBMP polls for two reasons. One, it is ruling the state and by the virtue of being in the government it can win the confidence of the people by unleashing developmental activities in this metropolitan city. The second reason is purely political. The Congress had shouted from roof tops of the BJP’s monumental corruption during its five-year rule in the BBMP. Every Congress minister and elected representatives from city had called names against the BJP and had vowed to ‘expose’ the corrupt BJP.

However, the results were shocking to both Siddaramaiah in particular and the ruling party in general. Though it won 76 seats, 11 more than what it had earlier, the fact that it failed to get simple majority inspite of being in power makes its defeat look gigantic.

The BJP, on the other hand, was not all that comfortable ab initio. Like Congress, the saffron party too had the problem of plenty—with too many candidates aspiring for the tickets. There were protest demonstrations here and there—in one case, the former mayor Venkatesh Murthy went on dharna for having denied ticket. There was the threat of revolt and sabotage from within. But, the people have reposed their faith in the BJP once again, albeit with reduced number from 111 to 100.

BJP now claims that its performance has been recognised by the people and hence they have been voted once again. In real terms, the BJP was found wanting in its performance especially during the last two of the total six year term. Yet, if the BJP has been able to capture BBMP once again, it is for sure that notwithstanding its so-called performance, other factors, especially the vital caste equations, have also played the cutting-edge role in the last two days of polling. In this phenomenon, chief minister Siddaramaiah too has contributed, albeit, unwittingly, in what proved to be the game changer towards the BJP. The ruling party’s equivocal and ambivalent stance on whether or not to hold the elections—its exercise to go up to Supreme Court to get the elections postponed on one pretext or the other—too has played a crucial role. But the lethal caste factor is all the more interesting and a lesson for the political parties on the crucial issue of how to balance the sensitive caste equations.

Rightly or wrongly, Siddaramaiah had obtained the image of being anti-urban, anti-upper class & anti-upper caste, more specially anti-Vokkaliga and anti-Lingayat. Many of the TV channels had predicted ‘landslide’ victory for the Congress. Whether the ruling Congress had deliberately managed this electronic media to tilt the voters mood or it was the voluntary exercise by the media themselves is a moot question. But this exercise proved costly for the Congress because according to credible sources, the two Vokkaliga mutts are believed to have made a subtle but effective campaign among its community members to vote either the BJP or JD (S) and definitely not for the Congress. This was the effective way to deliver a slap in the face of Congress as Siddaramaiah had personally taken on former chief minister H.D.Kumaraswamy and former Prime Minister H.D.Deve Gowda, both inside and outside the legislature. The decision of the Vokkaligas was simple and the objective straight—prevent Congress from coming to power, even if it means victory for the BJP. JD (S), on its part has lost its vote-base due to host of factors and historical reasons, though it is not the subject matter of discussion in this report and hence it was futile for the Vokkaligas to vote Gowda’s party in Bengaluru city.

This is also one of the reasons for the BJP to score as many as 100 seats when its expectation of victory was roughly around 70 to 75 following severe anti-incumbency factor. In that way, BJP has managed to get Vokkaliga votes as well as consolidate its traditional Lingayat votes, thanks to the sway held by former chief minister and sitting MP B.S. Yeddyurappa.

But the fact that Congress managed to increase its tally from 61 to 75 is the indication of the fact that the BCs and dalits have voted the party enmass. But what is worrisome for the Congress is the ‘slow but sure’ eating away of the Muslim votes from its vote bank by MIM of Owaisi which managed to win two seats and gain significant percentage of votes in as many as 35 corporation wards. “The only way to eat an elephant is bit by bit, and inch by inch,” Owaisi had told a closed-door meeting of his supporters outside Bengaluru. His entry into city was banned by the state government. 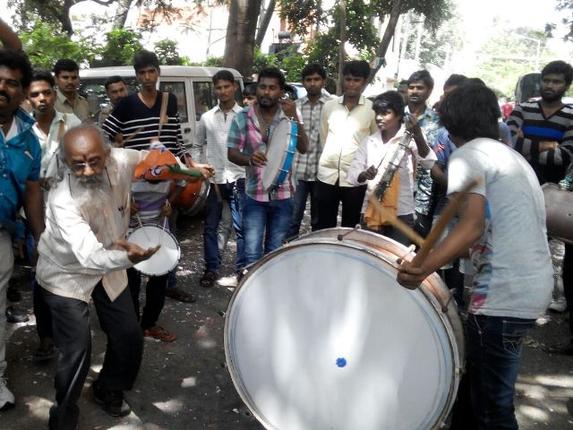 The JD (S), which does not know whether it is coming or going in state politics, had some grand plans to emerge as kingmaker by winning about 35 to 40 seats and extend support to BJP for a coalition arrangement. However, its devious game-plan came a cropper as the people gave BJP a simple majority, though its number came down from 111 to 100.

The BJP had not made Prime Minister Narendra Modi as its election mascot, rightly so but the pattern of voting indicates that the lower middle-class, middle-class and the upper middle-class had consciously expressed solidarity with Modi probably probably impressed by some of the forward-looking, far-reaching programmes initiated by him—which has developmental-agenda as well as ideological dimensions.

The tricky situation has emerged with the BJP winning the BBMP and Congress ruling the state. If the leadership of both the parties exhibit maturity, magnanimity and professionalism and work hand-in-hand towards the development of Bengaluru, the people would be benefitted. But if either of the two—if not both—show ego and make it a prestige issue, then the day-to-day life of the common man becomes miserable. People ardently hope that the sane and wise words of Modi will become the thumb rule for both the Congress and BJP—“political agenda before and during the elections; developmental agenda after the elections.” Whether the outcome of the BBMP elections proves to be fortunate or otherwise to the people only time will tell.