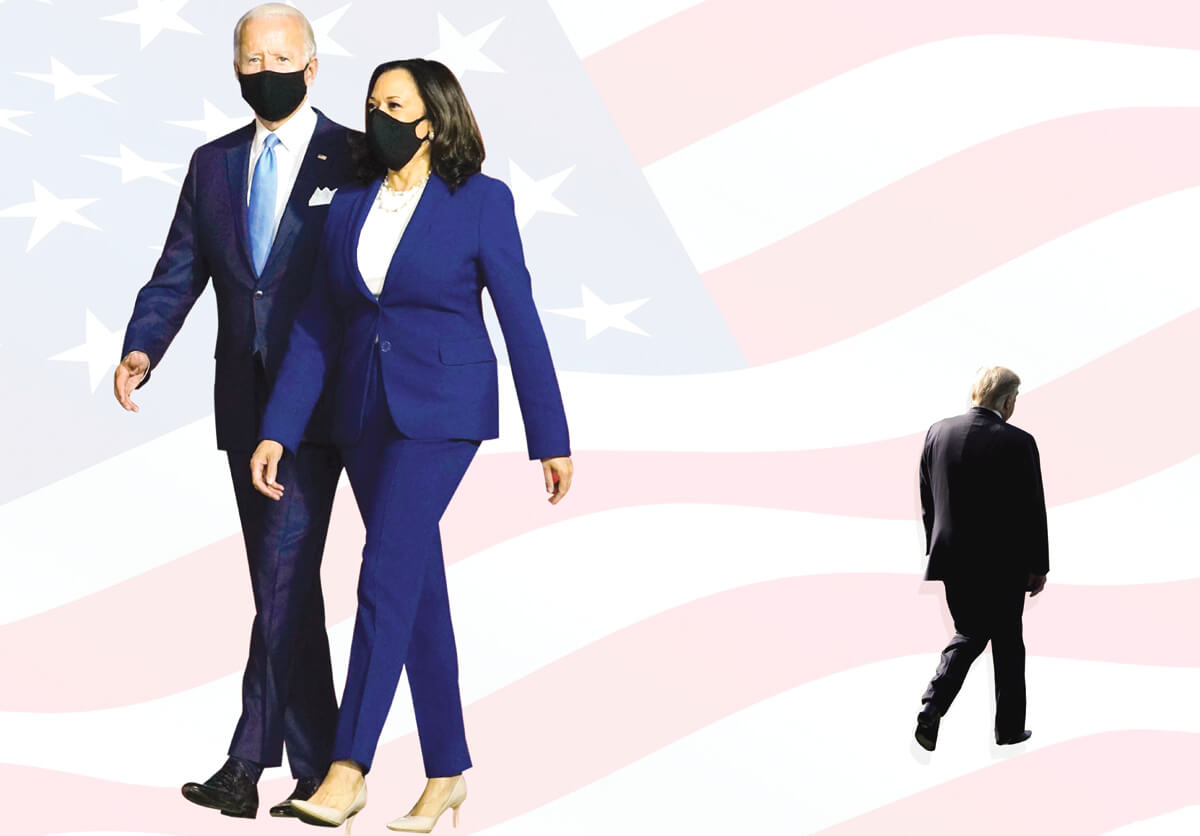 Joe Biden, the 77-year-old Democrat, who became the oldest man ever to be elected to the White House, will be the 46th president of the United States, after securing a major victory in the elections. At the time of writing this story,  Democrat’s Joe Biden who is now US President- elect, has managed to get 290 votes crossing  270 votes for the proving majority . While outgoing US President Donald Trump has secured 214 votes. However, Donald Trump has refused to accept his defeat in the elections and claimed fraud in the voting.

Outgoing US President Donald Trump said, his campaign will begin challenging US election results in court, saying “this election is far from over”.

“We believe these people are thieves. The big city machines are corrupt. This was a stolen election. Best pollster in Britain wrote this morning that this clearly was a stolen election, that it’s impossible to imagine that Biden outran Obama in some of these states. Where it mattered, they stole what they had to steal,” said Trump on November 8.

Senator Mitt Romney, the former Republican presidential candidate who has been strongly critical of Trump said, “ He is wrong to say that the election was rigged, corrupt and stolen.”

“Doing so damages the cause of freedom here and around the world, weakens the institutions that lie at the foundation of the republic, and recklessly inflames destructive and dangerous passions,” Romney added.

In his first statement after American media declared him the winner of the November 3 elections, thus making him the President-elect, Biden said, “I am honoured and humbled by the trust the American people have placed in me and in Vice President-elect Harris.”

“In the face of unprecedented obstacles, a record number of Americans voted. Proving once again, that democracy beats deep in the heart of America. With the campaign over, it’s time to put the anger and the harsh rhetoric behind us and come together as a nation. It’s time for America to unite. And to heal. We are the United States of America. And there’s nothing we can’t do, if we do it together,” said Joe Biden.

“We cannot repair the economy, restore our vitality or relish life’s most precious moments, hugging our grandchildren, our children, our birthdays, weddings, graduations, all the moments that matter most to us until we get it under control. I will name a group of leading scientists and experts as transition advisors to help take the Biden-Harris COVID plan and convert it into an action blueprint that will start on January the 20, 2021. That plan will be built on bedrock science. It will be constructed out of compassion, empathy, and concern. I will spare no effort, none, or any commitment to turn around this pandemic. Folks, I’m a proud Democrat. But I will govern as an American president. I’ll work as hard for those who didn’t vote for me as those who did. Let this grim era of demonization in America begin to end here and now. The refusal of Democrats and Republicans to cooperate with one another, it’s not some mysterious force beyond our control,” Biden added. 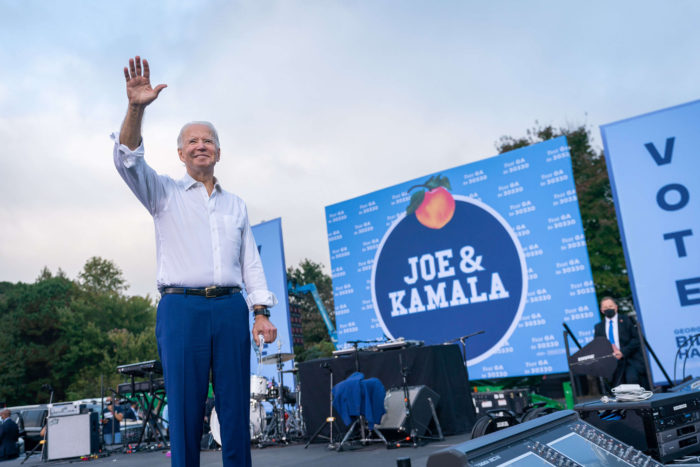 Indian origin Kamala Harris after the democratic Party’s victory in the elections became the first woman- first black person and the first South Asian- Vice-President of the United States. Vice President-elect Kamala Harris, 55, is a California senator, the daughter of a Jamaican father and an Indian mother. Harris won her first election in 2003 and became San Francisco’s district attorney. In 2010, she became the first woman of colour to be elected California’s attorney general. Harris was elected to the US Senate in 2016.

While delivering her Victory speech after the result, Kamala said, “No matter who you voted for, I will strive to be the vice president that Joe was to President Obama – loyal, honest, and prepared, waking up every day thinking of you and your families. Because now is when the real work begins. The hard work. The necessary work. The good work. The essential work to save lives and beat this pandemic. To rebuild our economy so it works for working people,”

“The woman most responsible for my presence here today, my mother, Shyamala Gopalan Harris, who is always in our hearts. When she came here from India at the age of 19, she maybe didn’t quite imagine this moment. But she believed so deeply in an America where a moment like this is possible, and so I am thinking about her and about the generations of women, Black women, Asian, white, Latina, native American women, who throughout our nation’s history, have paved the way for this moment tonight,” said Kamala Harris.

“Women who fought and sacrificed so much for equality and liberty and justice for all. Including the Black women who are often, too often overlooked but so often proved they are the backbone of our democracy. All the women who have worked to secure and protect the right to vote for over a century. One hundred years ago with the 19th Amendment. Fifty-five years ago with the Voting Rights Act and now in 2020 with a new generation of women in our country who cast their ballots and continued the fight for their fundamental right to vote and be heard. Tonight I reflect on their struggle, their determination and the strength of their vision to see what can be unburdened by what has been. And I stand on their shoulders. And what a testament it is to Joe’s character that he had the audacity to break one of the most substantial barriers that exists in our country and select a woman as his vice president,” She added. 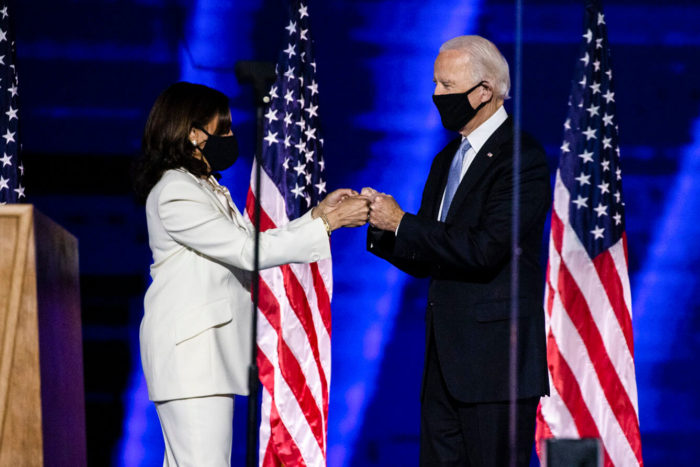 “I will strive to be a vice president like Joe was to President Obama, loyal, honest, and prepared, waking up every day thinking of you and your family, because now is when the real work begins, the hard work, the necessary work, the good work, the essential work to save lives and beat this epidemic. To rebuild our economy so it works for working people, to root out systemic racism in our justice system and society. To combat the climate crisis, to unite our country and heal the soul of our nation. And the road ahead will not be easy. But America is ready. And so are Joe and I. We have elected a president who represents the best in us, a leader the world will respect and our children will look up to. A commander in chief who will respect our troops and keep our country safe and a president for all Americans,” Kamala further added.

After the announcement of the victory, Prime Minister Narendra Modi in a Twitter post, congratulated Biden on his victory and said, “As the VP, your contribution to strengthening Indo-US relations was critical and invaluable. I look forward to working closely together once again to take India-US relations to greater heights.”

Congratulating  Kamala, the Prime Minister said: “Your success is pathbreaking, and a matter of immense pride not just for your chittis, but also for all Indian-Americans. I am confident that the vibrant India-US ties will get even stronger with your support and leadership.”

Having said this, as Joe Biden has come to power in the US, now people across the globe are speculating about his foreign policy, especially towards Indian. “The U.S. and India will stand together against terrorism in all its forms and work together to promote a region of peace and stability where neither China nor any other country threatens its neighbors,” Biden had written in an op-ed in October this year.

Not only this, Biden had repeatedly maintained during his election campaign that his administration will reform the H-1B visa system by eliminating the restrictions on employment-based green cards for Indians.

Here it is worth mentioning that Biden was one of the key advocates of strengthening the Indo-US partnership, especially in strategic areas. During that time, the US officially declared its support for India’s membership in a reformed and expanded United Nations Security Council.  The Obama-Biden Administration also named India a Major Defense Partner which made it easier to share advanced and critical technology to Indian defence .