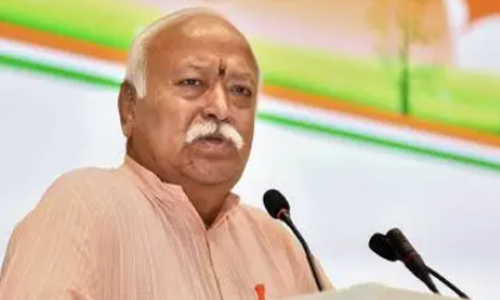 Rashtriya Swayamsevak Sangh’s Sarsanghchalak Mohan Bhagwat’s speeches at the three-day conclave in New Delhi are a script in syncretism and liberalism, which exposes myths, diffidence and prejudice of RSS haters. Anyone who does not believe what I am trying to explain should listen to a speech by Mohan Bhagwat and compare it with its interpretation in the next day’s English newspaper. It is an experience you won’t forget. For, these haters are clueless, whereas sceptics nodded in consent of the many insightful statements Bhagwat made in the speeches. The amount of lies about the RSS the paid media gets away with is astounding. I am glad RSS is doing this to uproot the myth perpetuated by the so-called secular brigade. There had been a vociferous campaign to completely malign the RSS running in this country for decades. It cannot be gainsaid that this brigade overlooks the truth that at the street level, the RSS volunteers participate and provide help in every calamity that has happened and work selflessly and tirelessly–the recent Kerala floods for example. The Sarsanghchalak rightly said that the government is not remote-controlled from Nagpur, as the Sangh does not support a single political party, rather it supports policies. For, the Sangh is for selfless service of the nation. It is a known fact that the teachings of the RSS leave their effect on swayamsevaks for entire life. There is no abuse of power, bribery or corruption allegations against them. The only complaint is they are Hindu advocates. Hinduism itself is poly theist, which supports any form of worship, unlike the Abrahamic religions, who do not believe in any God other than their own, and have been slitting each other’s throat throughout the world. In higher symmetry, all forces of nature merges into single force, however, they made up of different forces under breaking down of symmetry. The same way Hindus believe in  एकम् सत्य विप्रा बहुधा वदन्ति  (Truth is one and the learned people call it by different names), but also worship different attributes of the same one God.
In fact, during his speeches, Mohan Bhagwat nuanced the Sangh position on two issues most associated with Guru Golwalkar, when he said that the Constitution is the consensus of the country. And that the day it is said that Muslims are unwanted here, the concept of Hindutva will cease to be. If the common Muslim is able to grasp the profound meaning hidden in this statement, then those politicians, who indulge in politics of religion, will be deprived of their votes. Also those Muslim leaders will have to pack their bags, who threaten Muslims in the name of the Sangh. In fact, the common Muslim does not know what the RSS is. The so-called secular brigade has infused so much fear in the mind of the section of illiterate Muslims that they consider the Sangh to be their arch enemy, as the Sangh wants to liquidate them or drive them out of the country. The common Muslims also think that the Sangh’s publicity tantrum is so strong that it can spread any news it wants to. But in reality, it is the orthodox Muslims’ publicity tantrum that is so strong that even the educated Muslims fall prey to it. Against this backdrop, whatever the Sarsanghchalak of the RSS has said assumes significance, as it would imbibe confidence into the Muslims and dispel misconceptions. Further, he rightly asked: When all religions are equal, then why is there conversion? For, God cannot be sold in the market, nor can you make one, by force, to accept God. But today this is being done by deceit, force and allurement. In fact, during the conclave, Mohan Bhagwat emphasised the need for inclusive approach. He, in a sense, both praised and opposed PM Narendra Modi on few occasions to drive home the point that inclusive politics is the way forward.