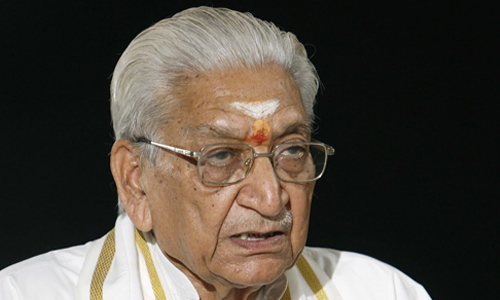 Stretch of land was filled with saffron flag and people were shouting: “Sougandh khai hai Ram ki, Mandir wahin banayenge”, “Hindu Hriday samrat Ashokiji amar rahen, etc.’’ A spirit of daredevilry filled the air. It was around 6:30 pm at Nigambodh Ghat, Delhi, and Ashok Singhal’s dead body was brought for cremation, his forehead was smeared with turmeric and vermilion and the vehicle decorated with flowers, ribbons, etc. Though crowd had mourned on his death, they were present there with pride and excitement on their faces.

While it seems like the end of one great leader, scholar and beloved saint of our era, in reality Ashokji will continue to inspire and influence many hearts for generations to come. On November 17, 2015, at the age of 89, he passed away. He was fondly called “Saviour of Hindus”. Age never catch up with him; even during his deteriorating health he ensured to visit ailing karyakartas.

Ashok Singhal was and is an ideal brand ambassador of Hindutva movement. It could be argued if there had been no aggressive Ram Janmabhoomi movement that Vishwa Hindu Parishad leader Ashok Singhal had launched in 1992, there might never have been a Bharatiya Janata Party government at the centre. If Rashtriya Swayamsevak Sangh assigned Atal Bihari Vajpayee and LK Advani to get into politics, Singhal was given the complicated task to building a cohesive and colossal identity of the Hindus.

Despite division of the Hindus on caste and regional lines, he was able to bring them on one platform. Unlike Vajpayee and Advani, he never developed a stature of his own.

Much before BJP jumpedf on the Ayodhya bandwagon, Singhal tried to keep this movement apolitical. He worked truly to unifying Hindus, although he knew it was a monolithic mission and an unrealistic dream. But he did it successfully.

“Liberation of Ram” was his dream and it had emboldened   people across the country. He inspired a generation of leaders, politically nurtured them and created a social engineering in the Hindu society that culminated in the creation of a political Hindu, which never was the case in Independent India. He was a cult figure in every sense, born into a rich Singhal family of Allahabad on September 27, 1926, in Agra.

Ashokji was brought up in religious atmosphere at home inculcating a sense of affection to Hinduism. An engineer with gold medal (IIT-BHU), a poet, music director and singer, he could have chosen a fabulous life joining his family business. But he chose to become an RSS pracharak, a life of rigorous self-renunciation. Ashokji, who was particularly close to Prof Rajendra Singh alias Rajju Bhaiya, a man of similar eminence, took up work of mass mobilisation of

Hindus to eradicate casteism, fight religious conversions and modernise religion to make it an effective instrument of political change. He was the man who shaped the concept of Hindu vote bank.

Without ever holding any political position or contesting elections, he held massive sway over many political destinies. Not only prime ministers and chief ministers from BJP to Congress and other parties respected and listened to him but also revered Shankaracharyas, form Swami Chinmayananda to Dayananda Saraswati, Swami Ramdev and Sri Sri Ravishankar listened to him because of his pious, saintly persona. Even Digvijay Singh had no problem in receiving Ashokji with all ritualistic fanfare at his official residence when he was chief minister.

Ashokji never openly complained against the silent attempts to deny him the status of the BJP’s patron figure. But after his death, especially since the BJP has secured an absolute majority in the Lok Sabha, shouldn’t the saffron party be introspecting whether Singhal be granted what he was denied all his life. His passion to unifying Bharat was Singhal’s hallmark. Ironically, he died on the third death anniversary of another great Hindu nationalistic leader Bala Saheb Thackeray. In May 2014, when the BJP won the general election, Ashokji said, “Modi’s victory put an end to 800 years of slavery.” It was a typical Ashok Singhal comment loaded with overtones.

Narendra Modi, Prime Minister of India, said: “Ashok Singhalji was a force behind several noble deeds and social work. The demise of Ashok Singhalji is a deep personal loss. He was an institution in himself, whose life was centred around serving the nation.”

Mohan Bhagwat, Sarasangh-achalak, RSS, stated: “Ram temple will be a real tribute to Ashokji. The passing away of Ashok Singhalji has left the global Hindu society in deep grief. His death marked the end of his long life with a long-drawn battle with death. Ashokji was RSS pracharak and he was entrusted with the responsibility of Vishwa Hindu Parishad and it is an end of era.’’

Dr Murali Manohar Joshi commented: “Singhalji was committed to the spread of Vedic wisdom and values in the world. Ram and Bharat are synonymous with each other and Singhalji sought to remove misconceptions. He never sought to divide people but was a unifying factor.”

Pravin Togadia: “The real tribute to Ashok Singhalji will be to build Ram Temple. We demand that to build the temple, the way of Sardar Patel should be used. For building Somnath Temple, Sardar Patel did not go to talk to people, nor did he wait for court order, but he brought a resolution in the Parliament.”

Rajnath Singh, Union Home Minister, said: “I am deeply saddened to learn of Ashok Singhalji’s demise. He was one of the leading lights of “Ramjanmabhoomi movement.”