Home >> An inspiriting tale of  an amateur inventor
Bookshelf

An inspiriting tale of  an amateur inventor 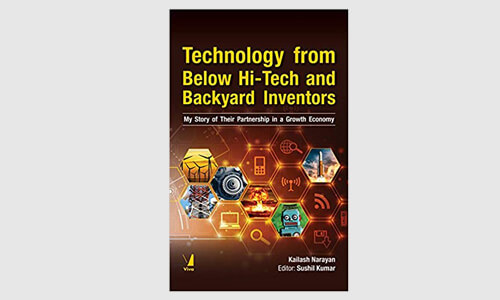 The book illustrates the role of ’new subalterns’ in Indian history and contemporary development by focusing on the life story of the late K. Narayan of Bijnor in western Uttar Pradesh in India. It describes his inventions and emphasises on his participatory engagements with his children aimed at realising the desired results in problem solving through scientific thinking and action. His simple

ways turned adversity into opportunity for them. Equally significant was his articulation of a discourse that the code for differentiating high technology from backyard science led to unacceptable notions about the status of science in India’s antiquity, while it was short on the practical value of blending the two in a market-led growth economy of today. For James Mill, Karl Marx and Max Weber India’s past amounted to a period of ‘no history’. Hence Muslim and British rule were taken as a point of India’s entry into a trajectory of historical development. This book is inspired by disagreement with such a reading of the situation and

underlines India’s high level of artisanal craftsmanship during the so-called no  Kailash Narayan history period as a source of cultural and technological development. It brings home this emphasis by narrating a recent story of a backyard inventor. As such, it is a call for a more balanced counter-history of technology in India.

The book makes a cogent point in stating that while there is a need to catch up with advanced nations on issues of hi-tech processes and products, there is an equal if not more compelling need for developing tools and processes that promote ‘backyard skills’ to hi-tech. This would help in inventing cheaper and culturally suited substitutes to imported hi-tech products through focussed experimentation using customer-generated feedback. 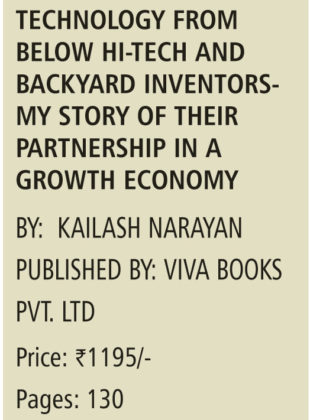 In a chapter, the writer explains about automatic device for regulating flow of liquid through a syphonic system. Syphonic systems are used for regulating the flow and quantity of water for flushing toilet pans after use. The regulating  device can be operated manually or it gets activated automatically.

This is the core value that late Kailash Narayan promoted during the early 1940’s when the cement factory he worked for was competing in the international market benefited from inventions and jugaad innovations he engineered by way of indigenous substitutions and well-thought-through innovative packaging that brought in profits while reducing production costs and improving quality. His innovations are in use till date and are the industry standard.

From cement to production of lead pencils was an easy switch for Kailash Narayan. Identifying a void, he set up a company for producing wood-cased lead pencils. Finding that the technology for production was a monopoly of foreign market leaders, he designed his own machinery for import substitution and was granted a patent for his innovation. He then created a market strategy for increasing his market share long before the world’s top B-schools started teaching such strategy.  A market scan across the world reveals how prophetic the work ethic of Kailash Narayan was, over 80 years ago.