A man of vision 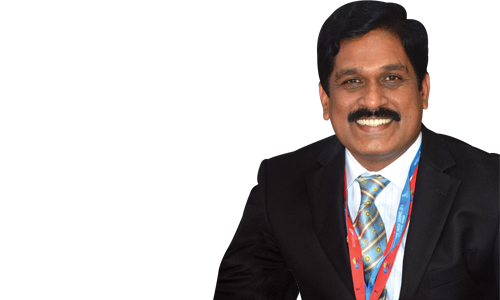 Doubling of the cargo handling operations at the Port of Visakhapatnam, which could not be done in 80 long years, was “almost achieved” in a targeted time of five years, thanks to the concerted efforts of the Chairman of the Port of Visakhapatnam Mr Movva Thirumala Krishna Babu. Another feather in his cap is that the port, under his able guidance, is now totally self-reliant as far as electricity goes. Talking  to Uday India, a beaming Krishna Babu said, “We used to buy power from Transco, but now, we are the only port in the country producing our own power and  is in a comfortable position to sell the excess power produced.”

He is diligent in his planning, ultra-careful and precise in execution, likes to take up challenges and jots down even the minutest of the “things to do”, that he doesn’t miss out on anything that needs his attention. Even before he took up this assignment, Mr Krishna Babu was an achiever and a man of vision.

As Commissioner of Greater Hyderabad Municipal Corporation (GHMC), Mr Babu was instrumental in “strategic decision-making” that raked in Rs 2500 crore additional revenue to the GHMC. The idea of issuing birth and death certificates at the doorstep was conceptualised during his tenure. When he took over the reins of the Port of Visakhapatnam in 2014 everything was not all that bright. But then, he vowed to put the port back on track and he rightly did so despite all odds.

Located almost midway between Kolkata and Chennai on the East Coast, the Port of Visakhapatnam has strategic importance to trade  with China, Australia, Indonesia, Singapore, Malaysia, other Asian  nations, South Africa, Nigeria and countries in the Middle East.

Starting its operations in October 1933, it transformed into a major port serving varied sectors such as steel, power, mining, petroleum, fertiliser and container segment. This is the only major port in the country having three international accreditations, ISO 9001, ISO 14001 and OHSAS 18001 for Quality, Environment and Occupational Health and Safety Management Systems.

Mr Babu was point blank in expressing his views on the competition the Port of Visakhapatnam is facing from the neighbouring Gangavaram Port. “When two ports will be serving the same hinterland and the capacity utilisation is less, there is always ‘unhealthy’ competition. We have a regulator and we cannot have different rates for different customers”, he said. “As a Government port our rates are fixed by the Tariff Authority for Major Ports and there is very less that anyone can do about the tariff. But whereas the private ports can give different rates to different customers”.

With Mr Krishna Babu at the helm of affairs, the Port of Visakhapatnam was adjudged the second cleanest Port. Incidentally the Port of Haldia which bagged the cleanest Port in the country, is also headed by Mr Babu holding additional charge as Chairman. The Quality Council of India, which conducted survey of all Major Ports to assess the implementation of Swachh Bharat initiatives, placed Port of Visakhapatnam in the 2nd position for achieving 750 points out of 1000 points.

There were several parameters under which the survey was conducted to assess the cleanest Port. Presence of sufficient functional, clean toilets (for men and women) with hand washing facility, development of green belt, publicity for behaviour change, communication on cleanliness at various places in the port, number of ships with zero discharge of waste, solid waste collection, segregation, sorting and storage on ships and liquid and faecal waste treatment before discharge of waste.

Dwelling at length on his brainchild, the Solar Power Project, Mr Babu said the Port of Visakhapatnam has taken a lead role among major ports in the country in successfully commissioning the 10 MW Solar Power Project at a cost of Rs.66 crore. The estimated 178 lakh power units generated per annum, from “one of its kind” project in the country, meets the entire requirement of 1 lakh units for the use of the Port. The excess or the left over power will be available for third party use, he said.

“The port is now saving nearly Rs 6 crore per annum by meeting its requirement and is likely to annually earn another Rs 4 crore from third party sale. The payback period of the Solar Power Project is four and a half years only”, a beaming Krishna Babu said. In addition, the port also commissioned 190 KW Solar Power Projects on the roof top spaces on its buildings. Besides taking initiatives for generation of Solar Power, the Port is also making rapid strides in conserving power. The Port has replaced more than 1000 street lights of 250 W SV/Metal Halide lamps with LED street lights of 120 W at a cost of Rs 1.5 crore ie; energy saving of nearly 6.22 lakh units or Rs.42 lakh savings per annum.

A landmark achievement for Mr Krishna Babu is the efforts he put in to drastically increase the cargo handling capacity from 67 million tonnes in 2013, when he took over, to 98 million tonnes as on today and it is poised to reach 135 million tonnes in another couple of years. “The capacity of the port would soon be doubled. The cargo handling too has registered a significant growth of 7% during 2016-17.  An incremental cargo of 4 million tonnes was achieved despite stiff competition from the neighbouring ports and general international economic recession”, Mr Babu said. Now a dedicated Business Development Team is established for marketing, as a result of which an estimated volume of 2 million tonnes is realised from new customers.

One of the significant achievement is completion of “deepening projects” of the outer harbour and inner harbour taken up with an investment of nearly Rs 500 crore. This has paved way for handling Supercape (2 lakh tonners) in the outer harbour and fully laden Panamax vessels in the inner harbour. Thus the Port of Visakhapatnam, added another feather to its cap, becoming the only major port in the country having Supercape handling facility, he said.

The port has taken up several developmental projects with an estimated investment Rs. 3,500 crore with the active involvement of private sector participation. Port has also taken up projects for reconstruction of old berths, development of new berths, improvements in rail and road evacuation facilities and other logistics with an investment of nearly Rs.1100 crore.

By mechanising the existing cargo handling infrastructure in a huge way and implementing strict pollution control measures, a major thrust has been given to pollution control, Mr  Krishna Babu said. Currently about 65% of the cargo is handled by mechanised facilities and the port is poised to achieve 100% mechanisation of bulk cargoes with the ongoing developmental works being taken up, he said.

“We have installed equipment for Continuous Ambient Air Quality Monitoring System (CAAQMS) at 3 locations at a cost of Rs. 2.71 crore and timely action is taken to maintain air quality to the desired level.

High rise wall of 7 m height with a dust barrier of 4.5 m, providing an effective barrier of 11.45 m is under construction”, Mr Babu said.

Mr Krishna Babu said Rs 20 crore was spent in 2016-17 for Swachh Bharat Abhiyan. Several activities were taken up as part of Swachh Pakhwada in 2017. Under the Swachhata awareness campaign, enacting playlets to spread swachhata message, cleaning the wharfs and sheds, repairs of sheds, auction and disposal of all unserviceable/unclaimed items, painting all signage boards, beautification and cleaning of parks was done, he said. In addition, modernising all toilets complexes, placing dust bins, installing boards-indicating cleanliness messages, painting /white washing all office buildings, residences, cleaning and repainting of statues, cleaning and repairing of all drains, are some of the other activities taken up, he said.

Under the Corporate Social Responsibility, the Port of Visakhapatnam has taken up skill development, education and health on a priority basis, Mr Krishna Babu said. As part of the “Beti Padav” initiative, school note books and school bags were distributed to students of the Government Queen Mary’s Girls High School. “Nearly 23 schools were identified to supply notebooks to 4500 students, regular free medical camps, in association with Indian Red Cross Society and supply of free medicines to the poor and economically backward are being done in a big way”, he said.

Construction and maintenance of toilets at 15 identified schools using pre cast technology, skill development training programmes for the poor and significant contribution towards procurement of medical equipment for the Government Hospitals are the other areas, the Port of Visakhapatnam is taking up under CSR.