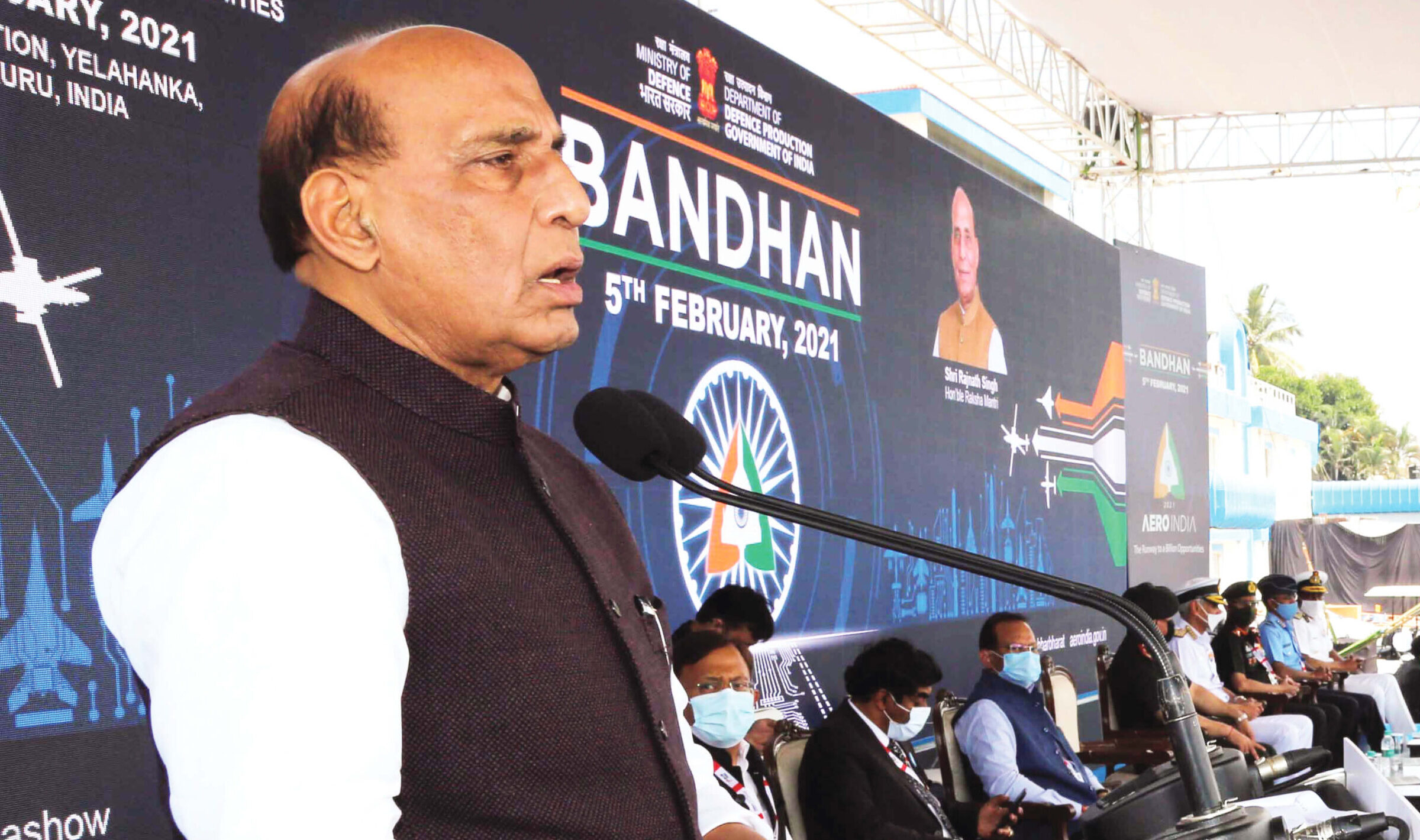 A total of 201 MoUs, product launches and technology transfers were concluded at the Bandhan ceremony held on the last day of Aero India 2021 at Yehalanka, Bengaluru on February 05, 2021. These included the formal handing over of the Advanced Light Helicopters MK-III to the Indian Navy and Indian Coast Guard (ICG), commencement of Performance based logistics of ICG fleet, initial operational clearance of Army version of Light Utility Helicopter etc.

In his address, Raksha Mantri Shri Rajnath said Bandhan exemplifies the spirit of public-private partnership in defence and aerospace sectors and have forged strategic ties that are poised to transform defence and aerospace manufacturing. He said 128 MoUs, 19 ToTs, 4 Handing Overs, 18 Product Launches and 32 major announcements were made at Aero India this year. He said Prime Minister Shri Narendra Modi’s clarion call for Atmanirbhar Bharat ignited the country’s spirit of innovation and collaboration.

Raksha Mantri said the foundation of India’s vision rests on three pillars – Research and Development, Public and Private Defence Production and Defence Exports. Referring to the field of research and development, he said there was an attempt to broaden the research base of the nation by supporting and encouraging the private sector. In this context, he mentioned that some patents of DRDO have been shared with the private sector to assist in defence production ventures. 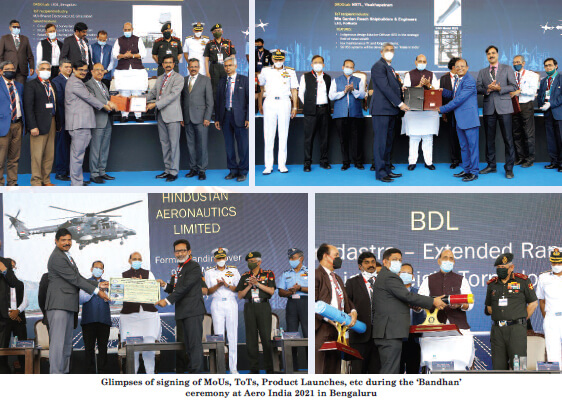 Shri Rajnath Singh mentioned initiatives to encourage and facilitate private sector R&D initiatives such as iDEX and Defence India Start-up Challenge (DISC). He recalled innovations such as the combat drone display, a part of the swarm technology initiative, exhibited during the Army Day function on 15 January 2021 at New Delhi.

Raksha Mantri reiterated India’s intention to bring down defence imports by at least $2 billion by 2022 to encourage local defence manufacturing. He informed that 138 proposals worth over $37 billion for domestic manufacturing were approved between 2016 and 2019. Highlighting the importance of the requisite eco-system for the growth of the defence industry, Shri Rajnath Singh said Rs 6,800 crore investments were pledged by both public and private industries in the defence corridors of Uttar Pradesh and Tamil Nadu.

Shri Rajnath Singh also spoke of the need for a robust domestic manufacturing base for defence export potential of the country. He reiterated the target of increasing the country’s defence base from $11 billion to $25 billion by 2025 including an export component of $5 billion. Defence exports grew from Rs 2000 crores to Rs 9000 crores from 2015-2020 with a vast majority spearheaded by the private sector. With reference to the Indian aerospace industry he said that the aero components sector is set to grow from Rs. 30,000 crores today to Rs. 60,000 crores by 2024. He enumerated the cost competitiveness of India’s manpower resources, availability of abundant, specialist capabilities and geographical advantages as reasons for its emergence as a global and regional Maintenance and Repair Operations hub. Hailing the agreements concluded at Aero India 2021 Raksha Mantri said they would give impetus to ‘Make In India’ and ‘Atmanirbhar Bharat’ and assured the gathering his Ministry would do everything possible to ensure the agreements are implemented.